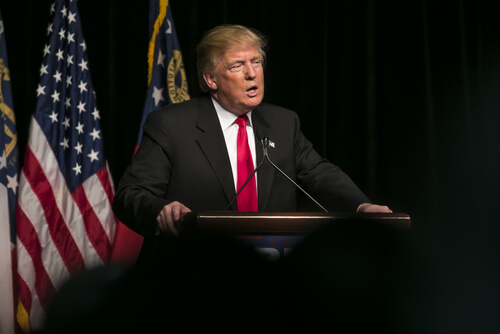 LESS IS MORE
Investors’ response to Donald Trump’s surprisingly conventional presidential address to Congress on Tuesday, which lacked any real detail but importantly scaled back his usual hyperbole and combative tone, suggests this may be the case.   In particular, Wednesday saw the S&P 500 log its first move of more than 1% for 56 days (+1.37%).
It is, therefore, our interpretation that, rather than betting on Trump as a source of near-term stimulus, the market is simply keen that he does not “upset the apple cart”.   Elsewhere, incoming economic data and hawkish Fed-speak prompted a large sell-off in bonds, with a rate hike in the US later this month (15th March) now expected.
Paul Krugman characterised Trump’s improved delivery by “he managed to read right through a speech without grabbing any body parts” 2The last down day of over 1% was 99 trading days ago.

The exercise was successful, with FED Funds futures moving sharply lower indicating an over 90% likelihood of a move in 9 days’ time. Relatedly, the yield on the US 2-year moved to a seven year high at (a still very low!) 1.32%.

EUROPE
Eurostoxx 3,386 +2.94%, German Bund 0.33% +17.00bps, Xover Credit Index 278 -21bps, EURUSD 1.062 -0.59%
Headline inflation across the Eurozone touched 2% (the ECB’s target rate) in February, prompting a sell-off in German government bonds. Moreover, the final PMIs were confirmed with the manufacturing portion at a near 6-year high. This sets an interesting backdrop for this week’s Governing Council meeting on Thursday. There will certainly be discussion as to whether forward guidance needs updating from the current stance that rates are expected “to remain at present or lower levels for an extended period of time, and well past the horizon of net asset purchases.”
UK data last week showed some signs of a softening economy, albeit from a strong base. Both consumer confidence and the PMIs for February declined. This contributed to a weaker GBP. Meanwhile, the European Union Notification of Withdrawal Bill failed to pass its final vote (in the House of Lords) as peers demanded the government guarantee the rights after Brexit of the 3.2 million EU citizens currently living in the UK. The amended bill will now pass back to the Commons. The Spring Budget will be published on Wednesday, which is expected to be fiscally neutral with few new measures.
Both Hungary and Israel left rates on hold at 0.9% and 0.1% respectively.

ASIA
HSCEI 1,017 -2.66%, Nikkei 1,937.00 -1.00%, 10yr JGB 0.07% +0bps, USDJPY 113.640 +1.68%
India’s economy grew faster than expected during the three months to December 2016, with the government’s demonetisation programme having little impact on reported GDP figures.   Official data showed that the economy grew 7.4% YoY over the quarter, versus expectations of 6.4%. Forecasters had marked down their expectations for India’s growth rate following the government’s announcement to withdraw 86% of bank notes in circulation on November 8th last year, in an attempt to flush the system of stores of ‘black money’ (income or assets undeclared for tax purposes or earned through illegal activities) and fake notes.
China’s February PMI data suggest growth momentum remains strong. A consistent reading from both the official NBS and Caixin Manufacturing PMIs showed that output, new domestic orders and new export orders all showed signs of improvement. On 5th March China’s National People’s Congress meeting began, with Premier Li Keqiang announcing that the official economic growth target for 2017 will be “around” 6.5% or higher “if possible”. This is a softening from 2016’s objective of between 6.5% and 7.0%.   The target for broad money supply growth was reduced slightly from 13% in 2016 to 12%, while the budget deficit for the central government was left unchanged at 3.0%.   Consistent with recent commentary and policy moves from the People’s Bank of China, Premier Li Keqiang also remarked that the government must demonstrate extra vigilance towards the risks posed by asset price bubbles, non-performing loans, and shadow banking.
Malaysia’s central bank kept interest rates on hold at 3.00%, in line with consensus. Policymakers were positive on the global trade environment and the prospects for Asian economies. In addition to the tailwind from the external sector, the central bank also expects strength in domestic demand to create positive momentum in the Malaysian economy.

LATIN AMERICA
MSCI Lat Am 2,607 -0.43%
Brazil posted a primary budget surplus (excluding interest expenses) of BRL 37bn in January, bringing the 12-month primary deficit to 2.4% of GDP, down from 2.5% in December. The general government net debt grew to 46.4% of GDP because of high-interest rates paid on this debt. Pension reform will be essential to restore the sustainability of the public debt dynamic.   The monetary policy committee of Brazil’s central bank set the stage for accelerating the pace of its easing cycle. According to the communiqué, the structural interest rate is a function of productivity growth, fiscal policy outlook, quality of the business environment, efficiency in resource allocation in financial markets, and quality of the economic policy. All are being tackled by the current government. The committee highlighted the importance of social security reform (and its impact on fiscal policy and debt dynamics) for a sustainable fall in the structural interest rate.   Brazil’s unemployment rate climbed to 12.6% in January, from 12.0% in December. Nominal wages continued to decelerate, increasing 6.5% YOY from 7.2% in December.   These 2 features should contribute to the consumption recovery lagging the industrial sector rebound, as lower wages benefit profitability. In the meantime, disposable income should remain under pressure for the next few quarters.
The central bank of Colombia surprised the market by cutting the policy rate by 25bps to 7.25%. In the press conference, both Finance Minister and Central Bank General Manager mentioned the sharp fall in consumer confidence to historical lows as the key factor behind the rate cut. The negative output gap, the fading impact of supply-side shocks on inflation, and the currently high real interest rate leave room for further easing ahead, although the pace remains unpredictable.
In Mexico, Banxico’s growth forecasts for 2017 and 2018 were revised downwards (to 1.3%-2.3% and 1.7%-2.7%, from 1.5%-2.5% and 2.2%-3.2% respectively) and inflation is expected to be at the 3% target only towards the end of 2018. A weak currency, increasing inflation, FED hikes and Banxico’s willingness to restore its reputation as an orthodox inflation-targeting central bank, all support the continuation of the tightening cycle.  In Argentina, Macri’s set of reforms are starting to bear fruit:

And there is more to come:

AFRICA
MSCI Africa 809 -1.09%
Kenya’s economy is moving towards a serious slowdown. Inflation rose to 4-year-high of 9% YOY in February (as food prices increased 16.5% because of a severe drought), putting consumers’ disposable income under pressure. In addition, the composite PMI fell to 50.1 in February from 52 the month before, and 55 a year ago. Kenya is heading towards stagflation and the interest rate cap introduced in August has further constrained all sectors of the economy.   On top of this, Kenya’s fiscal and debt situations are worsening still:

This situation is untenable; the currency is in for a massive devaluation, and interest rates will therefore overshoot. The more the government waits, the more painful the adjustment will be.
South African indicators are pointing towards a cyclical recovery. As always, the industrial sector should bounce ahead of consumption. The manufacturing PMI expanded to 52.5 from 50.9 in January. Consumer confidence remained in contraction territory and the domestic consumer is facing tighter financial conditions and labour market uncertainties.  Corporate credit accelerated to 10.1% in January (from 9.1%), while household credit slowed to 0.6% YoY (from 0.7%), but with a 6% contraction in real terms.