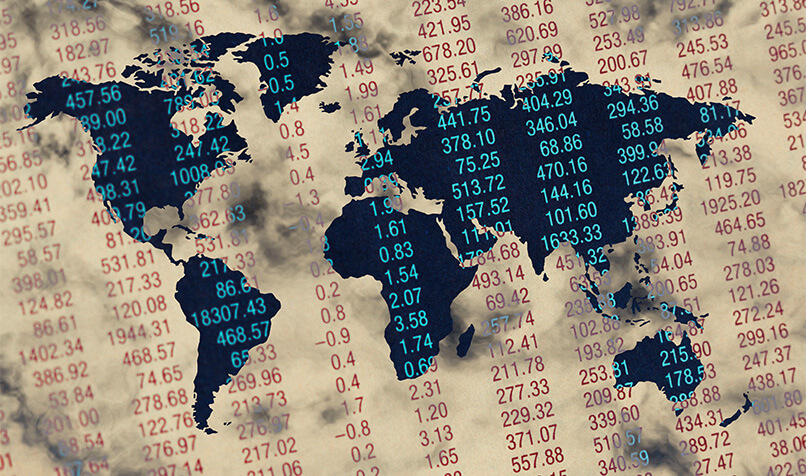 WILL THE POWELL PUTT STABILISE MARKETS?
The rally in US Treasury yields (the 10-year slid to 1.10% by the end of Friday) and the double-digit decline in the S&P 500 index (-11.5% by the end of the week) encapsulate the magnitude of fear in the market. One could argue that the market has run ahead of itself and has been behaving in an irrational manner, but that does not change the fact that policymakers across the globe will have to send reassuring messages that they are in control and are able minimise the economic impact.
In an attempt to sooth the nerves of the market, Fed Chair Powell signalled strongly that the Fed will ‘act as appropriate to support economy.’  The million-dollar question is whether injecting further liquidity would be of any help, either in terms of economic activity or to improve investor sentiment.

UNITED STATES
S&P 2,954 -11.49%, 10yr Treasury 1.12% –32.27bps, HY Credit Index 378 +84bps, Vix 35.38 +23.03Vol
As the number of coronavirus cases in developed countries increased, investor sentiment exponentially deteriorated by the end of the week. As a result, major stock indices registered double-digit declines: the S&P 500 was down 11.5% by the end of the week. Due to the risk-averse behaviour, US Treasury yields collapsed, as the 2-year yield decreased 44bp to 0.80%, whilst the 10-year declined 32bp to 1.10%. The broad market expects the Fed to deliver a 100bp worth of rate cuts by the end of the year, according to the Fed funds futures market. During the week, the dollar weakened, as the trade-weighted DXY dollar index declined 1.1%.
Fourth quarter real GDP growth was unchanged at 2.1% (QoQ SAAR) from the first release. Consumption growth was revised down to 1.7% from 1.8%. Final private domestic demand was revised lower to 1.3% from 1.4%.

ASIA
HSCEI 10,485 -4.60%, Nikkei 21,344.08 -6.67%, 10yr JGB- 0.12% 0bps, USDJPY 108.240 -3.13%
As global risk appetite abated, Asian stock indices headed south during the week. The Taiwanese (-3% in USD), Chinese “H” (-4.6% in USD) and “A” shares (-4.8% in USD) outperformed their regional peers, as investors expect authorities to deploy a comprehensive stimulus package soon, which could offset the adverse impact of the coronavirus.
Chinese official manufacturing PMI was as low as 35.7 in February (vs. 50 in January). Meanwhile, the non-manufacturing PMI decreased to 29.6. The Caixin manufacturing PMI was consistent with the official one, as it declined to 40.3 in February (vs. 51.1 in January). All three PMIs were weaker than the lowest point during the Great Financial Crisis in 2008-09. According to the reports, forward-looking business confidence held up on the expectation that the government would deliver stimulus measures. In the official press release, the government reported that bigger factories’ resumption of work reached 85.6% as of 25th February. According to the government’s estimate, only 30% of small and micro enterprises have resumed operations. Citi Bank’s Chinese activity tracker finds that economic activity is likely 50% back on track vs 44% one week earlier.
Malaysia’s latest political upheaval was sparked by (now former) PM Mahathir’s sudden resignation on Monday, which set off events that broke apart the Pakatan Harapan ruling coalition that won the 2018 general elections. Mr Mahathir was then appointed interim prime minister by the Malaysian king to oversee administrative matters in the country until a new premier and cabinet emerged. On Sunday, the King appointed Muhyiddin Yassin as Malaysia’s eighth prime minister. Mr Muhyiddin side lined Mr Mahathir and joined forces with former economy minister Azmin Ali to form the new government with the support from two main opposition parties, Malays National Organisation (UMNO) and Parti Islam SeMalaysia (PAS). The King decided that Mr Muhyiddin had enough members of parliament (112 required of 222 total MPs) on his side to form the government. Mr Mahathir has called for an urgent parliament session to test Muhyiddin’s claim of majority support. The next session of the parliament is scheduled on the 9thMarch.
Before the political chaos, the Parliament was set to pass a fiscal stimulus package worth of 1.3% of GDP. Passing the budget bill and its execution is postponed until the country has a functioning government.
Real GDP growth in India was published at 4.7% YoY for CY4Q19, matching the median of the survey collected by Bloomberg. On a sequential basis, quarterly GDP growth strengthened to 1.2% (in seasonally adjusted terms). The time series was revised by the Indian Statistics Office in line with an updated methodology, which means that the new series should reflect the underlying economic dynamics more accurately. According to the latest release, the annual rate of real GDP growth figures in CY2Q19 and CY3Q19 were revised up to 5.6% and 5.1%, respectively (from 5% and 4.5%). According to the detailed breakdown, agricultural output growth improved compared with the previous quarter, to 3.5% YoY, whilst services growth was solid and steady at 7.4% YoY.
The Indonesian government announced a USD 735mn stimulus package to limit the economic impact of the coronavirus outbreak. The largest component of the stimulus package is additional funding of a subsidy scheme that targets 15.2mn low-income families. Recipients will receive Rp200,000 (US$14) a month for the next six months, up from Rp150,000 previously. Furthermore, the government will allocate funds towards a mortgage subsidy scheme and towards the tourism industry.
The central bank of South Korea kept the key policy rate stable at 1.25%. The Monetary Policy Council acknowledged the adverse impact of the coronavirus on the economy and pointed out that looser financial conditions would not mend the virus-related ailments in the broader economy.
The central bank of Bangladesh decided to limit lending interest rates by banks to 9% from 1st April. Banks can also charge a 2ppt penalty in the event of default. Interest rates for export-related loans will remain unchanged at 7% per annum.
Although the decision could boost private consumption to some extent, the measure itself could create financial excesses and imbalances in the Bangladeshi banking sector.

LATIN AMERICA
Stock markets in the Latin American region declined across the board, due to deteriorating investor sentiment. In this environment, the Brazilian stock index declined 10.8% in USD, whilst the Mexican benchmark decreased 11.8 in USD.
Activity indicators in Chile surprised to the upside in January, as the normalization process following the protests in 4Q19 advanced. Industrial production grew 1.8% YoY, following the 3.2% YoY gain in December (vs. contractions in the previous two months). Retail sales volume returned to the positive range by increasing 0.1% YoY, the first gain since September. Meanwhile, the unemployment rate increased to 7.4% by the end of 2019 due to the adverse impact of social unrests and protests in 4Q19.
Real GDP growth in Mexico was revised down to -0.5% YoY in 4Q19 (from the flash estimate of -0.3%). According to the breakdown, the revision came mainly from industrial production and services activity. In a separate event, the central bank of Mexico published the minutes of the February meeting, when the MPC voted unanimously to cut the policy rate by 25bp to 7%. The general tone of the minutes was cautious, as most members stuck to a data dependent approach.

AFRICA
African stock markets were adversely impacted by the deteriorating global investor sentiment. Due to the increasing risk-aversion and local idiosyncratic issues, the South African benchmark delivered one of the weakest performances within the region, as it declined 15.4% in USD.
The South African government released the budget for FY2020-21 (ending in March 2021) on the 26thFebruary. The Finance Ministry revised the projected budget deficit up to 6.8% of GDP for FY2020-21, which means that the budgetary shortfall can significantly further widen compared with the previous fiscal year. According to the Finance Ministry’s own projection, gross public debt will breach 70% of GDP in just three years’ time. Although the structure of revenues change going forward (i.e. granting a relatively small amount of tax reliefs mostly for lower income earners, whilst raising levies on fuel, alcohol and tobacco), the government remains confident that budget revenues in proportion of GDP would remain stable in the coming fiscal years. As opposed to the revenue projection, expenditures are foreseen to further rise – despite the painful public wage cuts.
Real GDP growth in Nigeria was 2.6% YoY in 4Q19, up from 2.3% YoY in the previous quarter. Growth for full-year 2019, at 2.3%, was the strongest annual growth rate since the recession in 2016. The uptick was largely driven by the oil sector, which grew by 4.6% in 2019. Although economic activity has picked up since the 2016 recession, economic growth remains slower than population growth. Therefore, the rate of growth is insufficient to reverse a decline in income per head.
This week’s global market outlook is powered by Alquity www.alquity.com