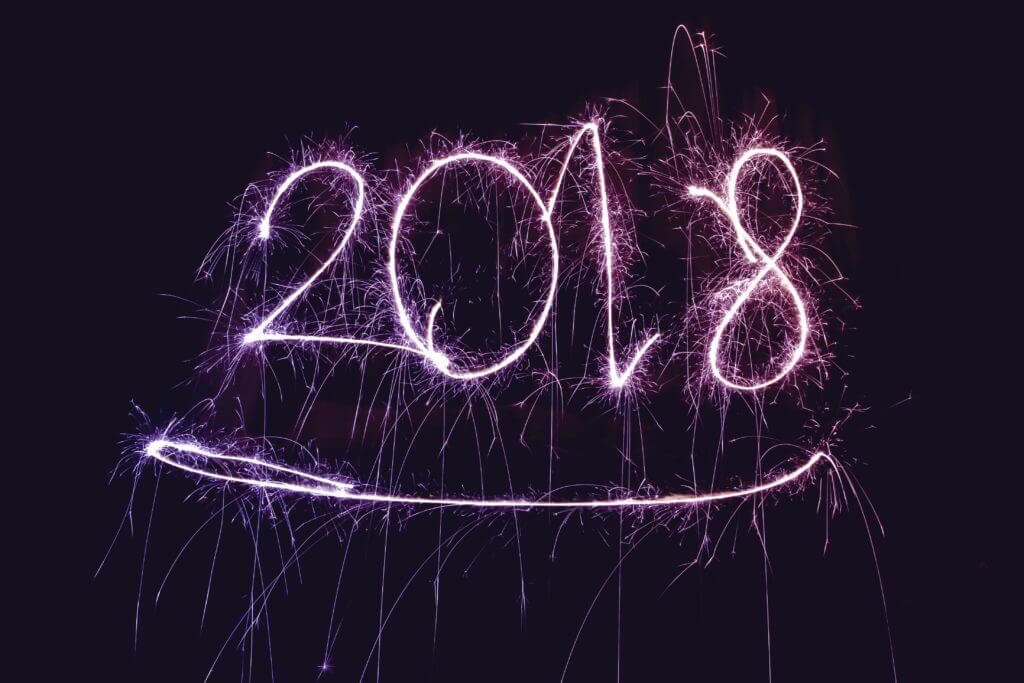 RINGING IN THE NEW YEAR
After a perfect year for passive investors (positive returns across asset classes and low volatility), 2018 may be likely to be more discriminating. Economic momentum is strong and provides a positive impetus, but this could play against a tightening in monetary conditions and rich valuations across developed markets. There are also a number of dynamics that could divide opinion.
These include:

There are still a number of emerging markets that remain well positioned on a relative basis. Of particular note, the election of Cyril Ramaphosa as President of the ANC, stands a chance of reversing a decade long decline in South African business confidence and unemployment.

UNITED STATES
S&P 2,674 -0.36%, 10yr Treasury 2.42% -7.56bps, HY Credit Index 308 -3bps, Vix 11.04 +1.14Vol
A small decline for US equity markets in the last week of the year didn’t much change the overall picture for 2017; total returns (including dividends) for the S&P 500 were positive and large caps outperformed small caps for the 9th and 4th straight year respectively. In fixed income, (taking the US 10 year as a proxy) investors also notched positive returns for the 4th consecutive year. The price action was, however, more peculiar as, despite a re-acceleration of the economy and 3 rate hikes, the 10-year treasury finished the year at more-or-less exactly the yield it started. Of course, this masked a substantial flattening of the curve (around 75bps between the 2 and 10 year points). Meanwhile, in currency space, the trade-weighted USD lost almost 10% and now sits around the weakest level in 3 years, reflecting stronger global growth.
Last week, economic data was mostly positive, including pending home sales for November beating expectations and Consumer Confidence consolidating near its 17-year high reached in November. This week we have the release of minutes to the December FOMC meeting and the employment report.

EUROPE
Eurostoxx 3,504 +0.01%, German Bund 0.45% +0.70bps, Xover Credit Index 234 -2bps, EURUSD 1.203 -1.19%
Given further stimulus from the ECB, improved growth dynamics and a positive outcome from the French election, investors might have expected better returns from European equities last year; the Eurostoxx 50 posted only a 7.26% return in local currency. However, a considerable strengthening in the EUR (the best performing major currency) meant that returns for foreign currency investors matched the strong performances of global peers.
Last week, German inflation and French and UK Q3 GDP growth, all came in better than expected. Italian bond yields, however, widened (to their highest absolute yield in 2 months and a spread over German bunds of 154bps) after the President dissolved parliament ahead of a general election on the 4th March. The market appears to be concerned that voting will result in a hung parliament and therefore a continued period of instability. The Italian economy did improve in 2017, but still remained at the bottom of the EU pile with a projected economic growth of 1.5%.

ASIA
HSCEI 1,207 +0.54%, Nikkei 2,276.00 +0.01%, 10yr JGB 0.05% 0bps, USDJPY 112.600 -0.50%
China’s official Manufacturing PMI slowed in December, to 51.6 down from 51.8 in November. This was slightly lower than consensus expectations of 51.7. The modest deceleration was broad at the sub-index level. Export orders were the exception, increasing month on month from 50.8 to 51.9. On the supply-side, pricing trends established for much of last year persisted, with both the producer price and raw material price sub-indices continuing to rise, symptomatic of the ongoing government efforts to reduce excess capacity.
The Chinese government this week imposed a RMB100,000 limit on withdrawals made overseas from Chinese bank accounts by any individual. Previously, the limit was imposed as a RMB100,000 cap on each account possessed by a Chinese national, whereas now the same cap is applied to all accounts in aggregate.
India’s Nikkei Manufacturing PMI hit a five-year high in December of 54.7, increasing from 52.6 in November. The strengthening of activity was broad based at the sub-index level, with manufacturing output and new orders leading the way.
This was the second consecutive month of stronger Manufacturing PMI data in India, with the activity gauge now back above pre-demonetisation levels. This is another data point consistent with the under-appreciated trend of fundamental improvement of the Indian economy. Positive momentum in both economic activity and corporate earnings in India, both of which should prove supportive for equities as we head in to 2018 appear to have now been established.
Having been foreshadowed by the recent upward move in money market rates, a previously unanticipated bout of fiscal slippage has begun to emerge in India. The Finance Ministry announced additional borrowing last week of an amount equal to 0.3% of GDP, a departure from its firm commitment to fiscal discipline up to this point.
In South Korea, export growth decelerated to 8.9% YOY, down from 9.5% in November, while import growth accelerated to 13.0% YOY, up from 12.7% the previous month. The monthly trade surplus thus narrowed, from US$7.6bn to $5.8bn. Headline inflation rose slightly, from 1.3% YOY in November to 1.5% YOY last month.
Vietnam’s equity market continued its outperformance, with stock rising a further 3% during the last week of December to touch a 10-year high. High profile IPOs, strong domestic growth and high foreign direct investment all helped propel the local stock market index to a return of +48% in US dollars during 2017.
The central bank of Sri Lanka left deposit rates unchanged at 7.25% last week.
Though GDP growth remains weak at sub-4% levels, the central bank is constrained in its ability to stimulate the economy on account of the current high levels of credit growth (+15% YOY) and inflation (CPI at 7.1% YOY).

LATIN AMERICA
MSCI Lat Am 2,828 +1.70%
If 2017 was a recovery year for Latin American economies, 2018 should confirm the rebound but, beyond this, nothing is guaranteed. More structural reforms must be delivered to increase potential GDP growth rates and sustain development over a longer period. The easing of monetary policy and falling inflation in LatAm ex Mexico is near its end (except in Argentina where they could keep falling) but inflation and interest rates seem sustainable at those low levels. Cyclically, Mexico is the only outlier in Latin America: increasing inflation and interest rate, most indicators thus pointing to a growth slowdown.
On the political front, 2017 was a confirmation that the pendulum has shifted from irresponsible fiscal policies and anti-business stance to more structural pro-business reforms, with the end Bachelet’s era in Chile and the election of Pinera in December 2017 (After Argentina in 2015, Brazil and Peru in 2016). In 2018, there will be presidential elections in Colombia, Mexico and Brazil.
Moving on to Peru where President PP Kuczynski avoided impeachment for being accused of corruption in a new Odebrecht scandal. The opposition led by Keiko Fujimori fell short of the 87 votes (2/3 majority) necessary to impeach him, as her brother Kenji and 8 other member of her party voted to keep the president in power. The timing (1 week after the vote) of the pardon granted by PPK to ex-President Alberto Fujimori (father of Keiko and Kenji), who was jailed for crimes against humanity, human rights violations and corruption, could be questioned.
Argentina’s central bank kept its benchmark interest rate on hold again at 28.75%. The inflation target for 2018 has been adjusted from 10% to 15% reflecting the inability of the central bank to tame inflation and price liberalisations in 2017 despite high real interest rates.
Argentina’s trade deficit widened in November to USD 1.5Bn, bringing the 12-month rolling deficit to a record high of USD 7.6Bn. The current account deficit is now expected to hit 5.5% of GDP in 2017.
In the latest session of the year, Argentina’s Congress voted the 2018 budget (deficit of 3.2% of GDP) and passed:

Looking forward into 2018, the outcome of the ANC electoral conference in December provides the setting for a recovery in South Africa, while Egypt’s painful economic reform which saw inflation increase to 33%, should begin to bear fruits. In contrast, the near term outlook for the Nigerian and Kenyan economies will remain challenging, driven by weak fundamentals, limited political will to address structural imbalances, and high sensitivity to external shocks.
The business-friendly candidate Cyril Ramaphosa was elected as the new head of South Africa’s ruling African National Congress, succeeding President Jacob Zuma. The outcome, together with the prospect of the new ANC leadership calling for Zuma’s resignation before the 2019 general election, saw the rand gain close to 10% against the dollar. Elsewhere, the Constitutional Court ruled that parliament had failed to hold Zuma to account over a scandal related to state-funded upgrades to his home, and must launch proceedings that could remove him from office.
Ramaphosa’s much more disciplined and rational approach, and influence of the new leadership team should see the country avoid further ratings downgrade, while an early resignation by Zuma will bring an end to c.10 years of economic decline and spur an economic rebound.
Moving on to data publication in South Africa, private sector credit demand growth rose to 6.45% in November from 5.43% in October, while an 11.5% expansion in exports supported by rebound in global prices of commodities such as gold and platinum, drove the country’s trade surplus up from 4.34Bn in October to 13Bn rand in November, its highest in one and half years.
The positive trade account provides a buffer to shield the economy from an increasing cost of debt following several credit rating downgrades in 2017. Overall, the near-term outlook is positive in South Africa.
In Egypt, the central bank held its overnight deposit and lending rates at 18.75% and 19.75%, respectively, noting that “baseline inflation outlook remains consistent with achieving the CBE’s inflation target of 13% (+/-3%) in 2018 Q4 and single digits thereafter”.
CPI declined for the fourth consecutive month to 26.0% YOY in November, from a peak of 33.0% in July. A second wave of energy subsidy cuts (follows a 42% price hike in July 2017) is expected in July 2018.
Elsewhere in Egypt: