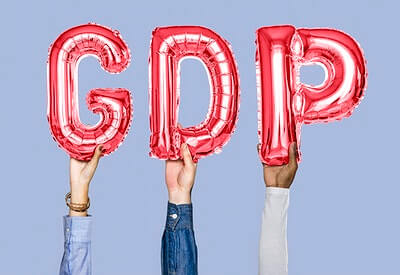 GROWING PAINS AS U.S. Q4 GDP REVISED DOWN TO 2.2%
The U.S. economy showed further signs of slowing as the 4Q18 GDP figure was revised down to 2.2%, which was significantly lower than the 2.6% initially reported. After business investment, consumer spending and local government expenditures were accounted for, the final GDP figure came in below economists forecast of 2.5%. The revised figure did not change the full year GDP growth rate, which remains at 2.9%. This was the slowest pace of growth since the first quarter 2018 and adds further questions surrounding the FED’s interest rate decisions for this year.

EUROPE
Eurostoxx 3,370 +0.71%, German Bund -0.05% -5.50bps, Xover Credit Index 266 -8bps, USDEUR .890 +0.68%
Most developed market European indices rose slightly during the week. Turkey (-4%) and Sweden (-1.51%) were the largest detractors.
German inflation data for March was weaker than expected with consumer prices rising by 1.4% YoY. Consumer prices undershot the consensus forecast of 1.6% and was driven by weaker services and food costs. Earlier this month, the ECB delayed plans to normalise policy and delayed a rate increase until next year.
Eurozone corporate lending growth rebounded in February, expanding 3.7% YoY. The loan growth data came as a relief, easing fears that banks were stopping credit lending to corporates amongst the growth slowdown. Growth in consumer borrowing also picked up modestly to 3.3% YoY, which suggests that consumer confidence remains intact.
UK GDP grew 1.4% in 2018, an upward revision from the initial 1.3% estimate. On a QoQ basis, GDP grew by just 0.2%. The BOE highlighted that ‘the economic outlook will continue to depend significantly on the nature and timing of EU withdrawal, in particular; the new trading arrangements between the European Union and the United Kingdom; whether the transition to them is abrupt or smooth; and how households, businesses and financial markets respond.’
Looking forward: UK PMI and European inflation data will be released.

ASIA
HSCEI 11,558 -1.23%, Nikkei 21,509.03 -2.60%, 10yr JGB -0.07% 0bps, USDJPY 111.010 +0.66%
Asian markets fared well last week, as the majority of the broad stock indices gained in USD terms. The Philippine stock market was one of the best performers rising 2.8% in USD, followed by Chinese “A” shares (+2.7% in USD) and the Taiwanese market (+1.9% in USD).
Most Asian markets fell over the week. MSCI Asia Pacific ex. Japan index fell 0.11% in USD, Chinese ‘A’ shares -0.34% in USD, Hong Kong -0.24% in USD and Vietnam -0.87% in USD. Sri Lanka and India were the exceptions, rising 1.77% and 1.3% in USD respectively.
Thailand’s industrial production data undershot estimates, falling 1.6% YoY. Despite the weaker production data, export growth was robust in February and the Thai Baht remained stable amid the political noise following Sunday’s general election.
India’s current account deficit widened to 2.5% of GDP in Q3 of the current fiscal year, this compares with the 2.1% deficit a year ago. ‘The widening of the CAD on a year-on-year basis was primarily on account of a ‘higher trade deficit at $49.5bn as compared with $44.0bn a year ago’ the Reserve Bank of India (RBI) said in a statement.
Hong Kong’s exports fell 6.9% YOY in February. Combining January and February figures to remove the effect from the difference in timing of the Lunar New Year holidays, exports decreased by 3.1% YoY. The downward product cycle of electronic parts and trade tensions were significant factors.
China’s final current account surplus for 2018 came in at $49.1bn, equivalent to 0.4 percent of GDP. China had a final current account surplus of $54.6bn in Q4. Chinese manufacturing companies’ profits in January and February declined 14% YoY for the same period. Tax reductions are expected to provide relief amid the weaker global demand environment.
Vietnam’s Q1 GPD grew 6.79%, which is a slower pace than the 7.45% GDP growth in Q1 last year. This was largely due to weakening global demand for smartphones, leading to a 4.3% YoY decline in smartphone exports. Total exports grew 4.7% YoY, which was significantly slower than the 24.5% expansion in Q1 last year. Vietnam’s consumer price index in March rose 2.7% YoY, driven by an increase in the cost of education services and food.
Pakistan’s Central Bank raised its policy rate by 50pbs to 10.75%. Pakistan’s central bank highlighted that ‘underlying inflationary pressures continue, the fiscal deficit is elevated, and despite an improvement, the current account deficit is still high’. Consumer price inflation accelerated to 8.2% in February, the highest annual increase since June 2014.
Looking forward: There are a myriad of releases this week including; Hong Kong retail sales data, Korea trade data, Japan manufacturing PMI, Indonesia inflation and India’s RBI interest rate decision.

LATIN AMERICA
MSCI Lat Am 2,746 +1.22%
Latin American stock markets delivered a mixed performance during the week. While the Brazilian and Chilean benchmark indices rose 1.8% and 1% respectively, the Peruvian index went sideways, and the Colombian index declined 1.8% (all in USD).
The Mexican central bank held the policy rate at 8.25% and retained its hawkish tone. Although the MPC acknowledged that the international backdrop became more supportive, members (implicitly) argued for the sustenance of their hawkish stance. The MPC cited that there were upside risks to inflation and added that the persistence in core inflation needed further monitoring. In addition, the MPC pointed out that risks related to the credit rating of sovereign debt and Pemex also call for a cautious approach by the central bank.
The Chilean central bank held the policy rate at 3% in a unanimous decision. The MPC highlighted the recent economic activity data had confirmed its view that non-mining activity would convincingly firm. However, inflation remained surprisingly low, due to a greater degree of economic slack than previously estimated.
Unemployment rate in Colombia rose to 11.8% in February, one percentage point higher than a year ago. The rise in the headline jobless figure is mostly explained by seasonal patterns. In addition, the fact the labour force participation rose sharply, by 0.5ppt to 64.1%, also explains a significant portion of the increase in the unemployment rate.
Overall, rising unemployment rate does not imply that there is a structural underlying weakness in the Colombian economy, as it is explained by seasonality and an expanding active pool of labour.
The official Argentine GDP proxy index expanded by 0.6% MoM in seasonally adjusted terms in January. In spite of the fact that economic output stagnated in a monthly comparison, economic activity contracted in an annual comparison, by 5.7%. With the exception of agriculture, most of the industries performed weakly.
Looking forward: This week kicks off with the release of the Peruvian inflation gauge and carries on with manufacturing PMI indices from Brazil, Colombia and Mexico. Later, the Colombian central bank will release the minutes of the last rate-setting meeting. In the second half of the week, a wide range of monthly economic activity indicators are revealed.

AFRICA
MSCI Africa 784 +0.64%
African indices rose last week, led by South Africa (1.42% in USD). Ghana and Kenya were the biggest detractors, falling 5.46% and 1.51% in USD respectively.
The Central Bank of Egypt kept its key interest rates on hold; overnight deposit and lending rates at 15.8% and 16.8%, respectively, citing accelerating inflation in February, weakening global economic activity, and increases in oil prices for its decision to keep rates on hold.
The decision goes against market expectations of as much as 100bps rates cut driven by improving fundamentals, the need to reduce cost of borrowing to boost capital investment and a supportive US Federal Reserve’s monetary policy stance.
The CBE will likely maintain policy rates until a possible spike in inflation from Ramadan and the next round of subsidy phases out by 4Q19.
Moody’s kept South Africa’s credit rating at investment grade and its outlook at stable. This provides a welcome reprieve, allowing the country to keep its spot in the World Government Bond Index and remain in the Citigroup World Bond Index and provides a window for the ruling party to get its fiscal house in order.
South African central bank kept its benchmark repo rate unchanged at 6.7% in a unanimous decision saying it assessed the risks to the inflation outlook to be more or less balanced. The decision was in line with market expectations.
Nigeria’s central bank in a surprise move, cut its benchmark interest rate to 13.5% from 14.0% as part of an attempt to stimulate growth in Africa’s biggest economy after four consecutive years of declining GDP per capita.
Given the weak transmission of MPR as a tool to influence the Nigeria economy, the impact of the rate cut on growth is likely to be limited. The Central Bank Governor acknowledged this in an investor meeting last week, noting that monetary policy remains tight and the rate cut is simply a signal that under the right environment, the MPC will look at money supply and liquidity to push growth.
Kenya’s inflation rose to 4.4% YOY in March from to 4.1% a month earlier, due to rising food prices. On a MOM basis, inflation was 1.6%.
This week’s global market outlook is powered by Alquity www.alquity.com