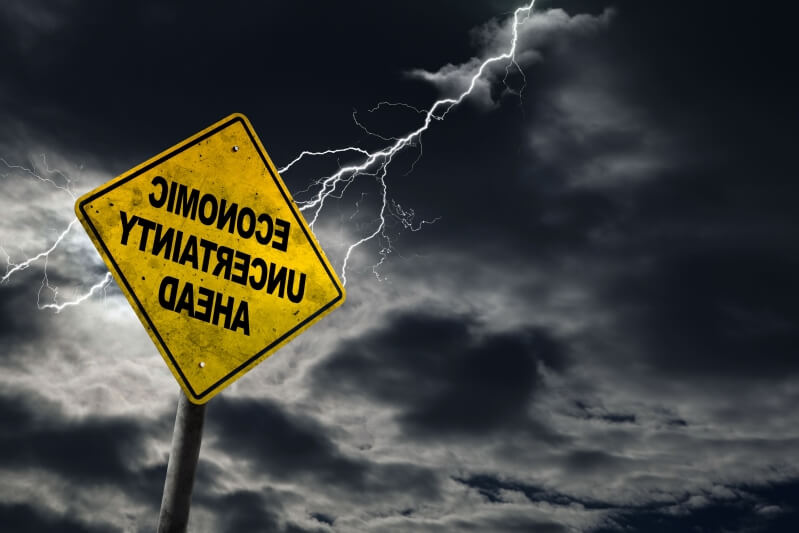 US TREASURY MARKET RATTLED BY IDEA OF A RECESSION
By the end of the week, headlines on almost all major media outlets screamed that a recession in the US is imminent, as the Treasury curve inverted. Simply put, the yield on the 10-year US Treasury fell below the yield quoted on the 3-month bill, although only by a basis point. This phenomenon usually (but not always) predicts that a recession in the US is lurking around the corner. Whilst not downplaying the significance of the yield curve’s inversion, a recession does not seem likely for the following reasons:

UNITED STATES
S&P 2,801 -0.77%, 10yr Treasury 2.46% -14.81bps, HY Credit Index 349 +7bps, Vix 17.09 +3.60Vol
Although the 3M-10Y steepness gauge turned to negative during the week due to macro data releases, other measures that capture the steepness of the yield curve remain “normal,” i.e. not signalling an upcoming recession. Nevertheless, the US stock market focused on the bearish aspects of the yield curve and consequently many of the major stock indices performed poorly, i.e. the Nasdaq Composite decreased 0.6%, the S&P500 declined 0.8%, while the Russell 2000 lost 3.1% of its value. By the end of the week, Fed funds futures massively repriced and now imply a 25bp rate cut for 4Q19 and on top of that a 25bp cut in 2020.
The Fed is going to be patient, according to Chair Powell, and thus shifted to a wait-and-see stance in the context of a jittery investor sentiment, as the Treasury market increasingly expects a sharp slowdown in economic activity. Chair Powell presented the updated “dot plot,” which now expects no rate changes throughout 2019 (vs. two 25bp hikes in the previous version). It was also confirmed that the balance sheet run-down will slow from May and end in September.
The Fed’s approach to monetary policy should persuade markets that the FOMC is willing to err on the side of being “too dovish” and let inflation exceed the target to make sure that underlying economic growth remains unhurt. Having said that, should tight labour market conditions persist throughout 2019 and translate into faster inflation, while real GDP growth is decent, the FOMC will probably raise the Fed funds rate to prevent the build-up of unwanted excesses.
Looking forward: The release of the final 4Q18 GDP data, the January PCE inflation figure and 4Q18 current account statistics will provide guidance to markets on the state of the US’ economy. Furthermore, high-level trade talks between the US and China will continue, as US Treasury Secretary Mnuchin travels to China with the aim to reach an agreement by April.

EUROPE
Eurostoxx 3,302 -2.57%, German Bund -0.01% -9.90bps, Xover Credit Index 280 -9bps, USDEUR .884 +0.20%
European stock markets had an awful week, as macroeconomic data in the Euro Area disappointed, proving that economic growth is frailer than most expected. As a result, the German stock index declined by 3% in USD terms, followed by the French (-2.7% in USD) and the Spanish (-1.7% in USD), while the Italian benchmark went sideways (in USD). The fixed income market in the Euro Area was driven by the same idea: the fear of a recession. Consequently, the 10-year German Bund plummeted by 10bp to -0.02%.
Business sentiment in the Euro Area has been sharply deteriorating. The German manufacturing PMI underwhelmed all expectations, as the index dropped to 47.6 suggesting a considerable contracting in industrial output in the next few months. March was the third consecutive month when the German manufacturing PMI was below 50. Meanwhile in France, not only the PMI gauge for manufacturing, but also the one for services declined below 50.
Looking forward: The Euro Area’s aggregate economic diary does not contain any relevant macro data release for the week. Germany will reveal inflation metrics, while the UK will publish GDP and current account statistics.

ASIA
HSCEI 11,232 +0.11%, Nikkei 20,977.11 +2.15%, 10yr JGB- 0.08% 0bps, USDJPY 110.170 -1.30%
Asian markets fared well last week, as the majority of the broad stock indices gained in USD terms. The Philippine stock market was one of the best performers rising 2.8% in USD, followed by Chinese “A” shares (+2.7% in USD) and the Taiwanese market (+1.9% in USD).
The Thai central bank kept the policy rate stable at 1.75%. The decision was unanimous. MPC members agreed that real GDP will grow around its potential, as domestic demand continues to firm. The Thai central bank foresees real GDP growth at 3.8% in 2019 and at 3.9% in 2020. According to the central bank’s forecast, inflation could hover around or marginally above 1% both this and next year.
The Taiwanese central bank held the policy rate at 1.375%. The MPC maintained its accommodating stance given the benign inflationary environment and negative output gap. According to the central bank, Taiwanese real GDP may expand by 2.1% in 2019.
The Indonesian central bank left the policy rate unchanged at 6% for the fourth consecutive month, citing an uncertain external environment. The MPC emphasised that lending activity has become sub-optimal.
The Philippine central bank maintained the policy rate at 4.75%. The MPC cited that upside inflation risks have dissipated, implying that rate hikes are very unlikely. Although the new Governor strongly hinted that the central bank could start an easing cycle before the official monetary policy meeting, the MPC as a whole refrained from indicating a preference for dovishness in the short-term.
Should inflation fall below 3% and remain sub-3% for a prolonged period, the MPC will likely embark on an easing cycle. However, this scenario has a relatively low probability at the moment.
Looking forward: The Asian economic diary is filled with exciting data releases for the week. China and India will release their respective 4Q18 current account statistics, while Vietnam is set to publish a wide range of macroeconomic metrics. In addition, foreign trade data will be reported by Thailand and Sri Lanka. At the end of the week, the Pakistani central bank decides on the appropriate level of policy interest rate.

LATIN AMERICA
MSCI Lat Am 2,713 -4.83%
Investor sentiment in Latin American stock markets was gloomy, which was captured by the MSCI EM Latin America index decreasing 4.8% in USD. The Brazilian market was down by 7.3% in USD, followed by the Chilean index (-3.6% in USD). In contrast, the Colombian and Mexican markets rose by 0.6% and 0.8% in USD, respectively.
Brazilian President Bolsonaro revealed the granular details of the Military Pension Reform complementing the ordinary Pension Reform bill. If the bill is passed in its current form, it will mean an additional BRL 10.3bn in savings per year over the next 10 years. Overall, the whole Pension Reform is set to save about BRL 1.1tn over 10 years’ time unless the measures in the bill are diluted by the Congress during the debate.
The Brazilian central bank kept the policy rate stable at 6.5%. The central bank foresees inflation in the range between 3.9-4.1% YoY at the end of 2019, i.e. around the mid-point of the inflation target. The tone of the MPC’s message was broadly neutral, citing data dependency for future rate decisions.
Domestic demand growth in Mexico decelerated to 0.8% YoY in 4Q18. In addition, exports growth lost momentum as well. Headline GDP growth slowed to 1.7% YoY in the last quarter of 2018, while full-year growth amounted to 2%. Meanwhile, inflation in Mexico was 4% YoY in the first two weeks of March, while the core gauge was 3.5% YoY. The degree and persistence of disinflation in 1Q19 was greater than expectations; primarily due to non-core inflationary developments, while core inflation has proven to be somewhat stickier.
Real GDP growth in Chile was 3.6% YoY in 4Q18, supported by both mining and non-mining sectors. In full-year 2018, the Chilean economy expanded by 4% on the back of the recovery of domestic demand (i.e. investments and household spending).
The Colombian central bank kept the policy rate at 4.25%. The decision was unanimous and MPC members hinted that the policy rate is likely to be kept stable in the coming months. According to the central bank’s assessment, the negative output gap has been closing, as GDP growth has been strengthening, while inflation remained contained.
Argentine real GDP fell sharply in 4Q18, as economic activity contracted by 6.2% YoY (-1.2% QoQ). In full-year 2018, real GDP declined by 2.5%. As GDP decreased in the last quarter of 2018, unemployment rose and hit 9.1%.
Looking forward: The Latin American economic diary is fully loaded for the week, including a monetary policy decision by the central banks of Mexico and Chile. Furthermore, the central bank of Brazil will release the minutes from its last monetary policy meeting.

AFRICA
MSCI Africa 779 -0.43%
Risk-averse market sentiment plagued African stock markets, as most of the benchmark indices declined. The Egyptian and Kenyan markets under performed their peers, as they decreased by 0.7% and 0.8% in USD, respectively.
Retail sales in South Africa rose 1.2% YoY in January after a 1.6% YoY decline in the previous month. Meanwhile, inflation was 4.1% YoY in February, as food inflation remained steady. February was the third consecutive month when the headline CPI inflation gauge was below the mid-point of the central bank’s inflation target band (3-6%).
Morocco’s central bank left its policy rate at 2.25% in the context of a dis-inflationary environment. The monetary authority foresees inflation to slow to 0.6% in 2019 from 1.9% in 2018.
The Egyptian Finance Minister announced the official estimates for this financial year’s GDP growth and budget deficit target. The FinMin foresaw real GDP to grow 6.1% in FY2019-20 (July-June) and set the deficit target to 7.2% of GDP.
Looking forward: Central banks take the centre of the stage in Africa this week, as the Nigerian, Kenyan, Moroccan, Egyptian and South African monetary authorities are scheduled to decide on their respective policy interest rates. Later, Moody’s is set to deliver its rating review decision on South Africa on the 29th.
This week’s global market outlook is powered by Alquity www.alquity.com