In the US, the S&P 500 suffered its biggest daily fall since the early months of the pandemic, closing down 4.0% on Wednesday following poor results from major retailers. On Friday, the index briefly fell into bear market territory, down more than 20% from its January high, as fears of a recession grew. The index finished the week 3.1% lower, while the Dow and the Nasdaq slid 2.9% and 3.8%, respectively.

The FTSE 100 slipped 0.4% as UK inflation soared and consumer confidence fell to its lowest level in nearly 50 years. The pan-European STOXX 600 declined 0.6% after the European Commission cut its growth forecasts for the eurozone.

Over in Asia, China’s decision to cut interest rates to support its ailing property sector helped to boost sentiment in the region. The Shanghai Composite gained
2.0% and the Nikkei 225 added 1.2%.

Most major indices started this week in the green, with the FTSE 100, Dax and S&P 500 up 1.7%, 1.4% and 1.9% at the close of trading on Monday (23 May).
Comments from US President Joe Biden that he was considering lowering tariffs on certain products imported from China helped to boost sentiment.

In economic news, figures from Rightmove showed the average asking price of a UK property rose by 2.1% month-on-month in May to £367,501, the highest for
the time of year since May 2014. On an annual basis, prices surged by 10.2% as supply failed to keep up with continued buoyant demand.

Stocks slipped back again at the start of trading on Tuesday. The FTSE 100 fell 1.0% as investors mulled the latest UK government borrowing data. According to
the Office for National Statistics (ONS), borrowing fell by £5.6bn year-on-year in April to £18.6bn but remained above pre-pandemic levels.

The latest UK inflation figures showed consumer prices rose at their steepest rate for more than 40 years in April as the cost of food and energy soared. The consumer prices index (CPI) rose by 9.0% compared with a year ago, up from 7.0% in March. On a monthly basis, the CPI increased by 2.5%, up from a rise of 0.6% in the same month a year ago.

The ONS said the increase in the energy price cap was the main reason for the jump in CPI. The annual inflation rate for electricity and gas hit 53.5% and 95.5%, respectively. Average petrol prices rose to a record 161.8p a litre in April from 125.5p a year earlier, pushing the annual inflation rate for motor fuels and lubricants to 31.4%. Elsewhere, the end of a temporary VAT cut for the hospitality industry led to a 1.7% monthly increase in restaurant and hotel prices.

The rising cost of living meant GfK’s consumer confidence barometer fell to -40 in May, the lowest level since records began in 1974. “This means consumer
confidence is now weaker than in the darkest days of the global banking crisis, the impact of Brexit on the economy, or the Covid shutdown,” said Joe Staton,
client strategy director at GfK. The sub-measures on the general economy sank to -63 for the last 12 months and -56 for the coming year. “The outlook for consumer confidence is gloomy, and nothing on the economic horizon shows a reason for optimism any time soon,” added Staton. 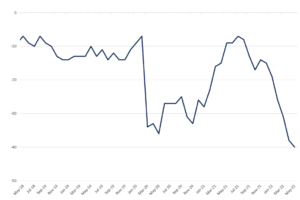 Despite the doom and gloom, separate figures from the ONS showed a surprise jump in retail sales in April. Sales volumes rose by 1.4% month-on-month following a fall of 1.2% in March. Economists in a Reuters poll had forecast a decline of 0.2%. The rise was led by strong growth in sales of alcohol and tobacco, which drove food store sales volumes up by 2.8%. Clothing sales were also strong as customers booked weddings and holidays.

On a quarterly basis, sales volumes fell by 0.3% in the three months to April, extending the downward trend in place since summer 2021. “Retail sales picked up in April after last month’s fall,” said Heather Bovill, ONS deputy director for surveys and economic indicators. “However, these figures still show a continued longerterm downward trend.

“April’s rise was driven by an increase in supermarket sales, led by alcohol and tobacco and sweet treats, with off-licences also reporting a boost, possibly due to
people staying in more to save money.”

Over in the US, data suggested the housing market could be slowing as rising mortgage rates make it harder for people to get onto the property ladder. Building permits dropped 3.2% month-on-month in April, led by a 4.6% fall in permits for single-family housing, according to the Commerce Department. Housing starts slipped by 0.2%, with single-family housing starts plunging by 7.3%.

It came after the NAHB/Wells Fargo Housing Market Index, a measure of housing market sentiment, dropped to the lowest level in nearly two years in May. This was blamed on rising prices for building materials and rapidly increasing mortgage rates. The 30-year fixed-rate mortgage averaged 5.3% during the week ended 12 May, the highest since July 2009, according to Freddie Mac data reported by Reuters.

How to Network for Success

Make Working From Home Work for You