Stock markets in the US ended their two-week losing streak as oil prices declined and the Federal Reserve increased interest rates in line with expectations. The S&P 500 rose 6.2% and the Nasdaq soared 8.2%.

The positive sentiment fed through to Japan, where the Nikkei 225 added 6.6% after the government said it would lift all remaining domestic coronavirus restrictions from 21 March. Hong Kong’s Hang Seng also rose 4.2%, whereas the Shanghai Composite eased 1.8%.

Key port of Mariupol under siege

Stocks started this week on a more subdued note amid news Ukraine’s key port, Mariupol, was under siege by Russian military.

The commodity-heavy FTSE 100 managed a 0.5% gain, boosted by a rise in oil and metal prices, while the Dow shed 0.6% to end its four-day rally.

In economic news, asking prices for UK homes rose by 1.7% in March, the biggest monthly rise for this time of year in 18 years. Rightmove said the jump was partly driven by a mismatch between supply and demand, with more than twice as many buyers as sellers. On an annual basis, asking prices were up 10.4% and have topped £350,000 for the first time.

UK and European indices started Tuesday in the green, with the FTSE 100 and STOXX 600 both up 0.5% at the start of trading.

Last week saw the Federal Reserve approve its first interest rate hike in more than three years. After keeping the benchmark interest rate at near zero during the
pandemic, the US central bank said it would raise rates by25 basis points. It also pencilled in increases at each of the six remaining meetings this year, pointing to a rate of 1.9% by the end of 2022 – a whole percentage point higher than indicated in December.

The Fed increased its inflation estimates, forecasting a 4.1% increase in the core personal consumption expenditures (PCE) price index this year, up from the
previous projection of 2.7% in December. Core PCE is expected to ease to 2.7% and 2.3% in 2023 and 2024, respectively. The Fed reduced its gross domestic product (GDP) growth forecast for 2022 from 4.0% to 2.8%, citing the potential implications of the Ukraine war.

“The invasion of Ukraine by Russia is causing tremendous human and economic hardship,” the statement said. “The implications for the US economy are highly uncertain, but in the near term the invasion and related events are likely to create additional upward pressure on inflation and weigh on economic activity.”

US retail sales rose by just 0.3% month-on-month in February, less than the 0.4% increase forecast by economists in a Reuters poll. The figures were held back
by a 3.7% drop in receipts at online retailers. Sales at furniture stores and health and personal care stores also declined by 1.0% and 1.8%, respectively, according to the Commerce Department.

US retail sales and food services 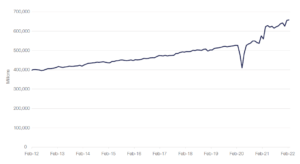 The smaller-than-expected increase in retail sales in February has been partly attributed to an upwardly revised 4.9% surge the previous month, the largest gain in ten months, as well as households cutting spending on goods as gasoline and food prices soar. Core retail sales (excluding gasoline, building materials and food services) fell by 1.2% in February following an upwardly revised 6.7% gain in January. On an annual basis, overall retail sales increased by 17.6%.

UK base rate lifted for third month in a row

Here in the UK, the Bank of England (BoE) announced an increase in the base interest rate for the third month in a row. The BoE’s monetary policy committee voted 8-1 in favour of an additional 0.25% increase in the main bank rate, taking it to 0.75%.

It comes after UK inflation surged to a 30-year high and a warning that it could increase further following Russia’s invasion of Ukraine. The BoE said the war has led to large increases in energy and other commodity prices and is likely to exacerbate global supply chain disruptions. “Global inflationary pressures will strengthen considerably further over coming months, while growth in economies that are net energy importers, including the UK, is likely to slow,” it stated.

Over in China, the country’s vice premier Lui He said last week that Beijing would roll out support for the Chinese economy and introduce more market-friendly policies. The announcement last Wednesday helped Hong Kong’s Hang Seng record its best trading session in over 13 years, closing 9.1% higher.

According to the Xinhua news agency, China’s Financial Stability and Development Committee said the government should roll out policies favourable to capital markets, while being cautious in introducing contractionary measures. The committee said China’s monetary policy should “actively respond” to support the economy and new credit should help maintain “appropriate growth”. It claimed the Chinese government continues to support companies’ listing of shares overseas and has maintained “good communications” with US regulators on Chinese companies’ listings in the US. Beijing has also paused plans to expand trials of the property tax announced at the end of last year, Xinhua reported.