US large-cap indices fell for a second consecutive week after US officials warned a Russian invasion of Ukraine was imminent. The S&P 500 declined 1.6% and the Dow shed 1.9%, with fears of more aggressive monetary policy tightening also weighing on investor sentiment.

The negative sentiment spread to Japan, where the Nikkei 225 fell 2.1% despite data showing the Japanese economy returned to growth in the fourth quarter of
2021. In contrast, China’s Shanghai Composite managed a 0.8% gain as the country’s inflation data for January proved to be lower than expected.

The FTSE 100 slipped 0.4% and the STOXX 600 declined 1.3% as news came through of a clash between Russian and Ukrainian troops.

US indices were closed on Monday for Presidents’ Day.

In economic news, the IHS Markit / CIPS flash UK composite purchasing managers’ index rose from 54.2 in January to 60.2 in February, the highest reading since June 2021. The services activity sub-index rose from 54.1 to 60.8, while manufacturing output rose to a seven-month high of 56.7 as supply chain pressures eased.

Elsewhere, Rightmove recorded one of the biggest monthly increases in property asking prices in more than 20 years, with prices up 2.3% in February to £348,804.

At the start of trading on Tuesday, the FTSE 100 and the STOXX 600 were down 0.7% and 1.7%, respectively, as UK health secretary Sajid Javid said the invasion of Ukraine had begun, and the UK prepared to announce a package of sanctions against Russia. The EU and the US also said they would impose more sanctions after Russian president Vladimir Putin signed a decree to formally recognise the independence of two rebel controlled regions in eastern Ukraine.

The latest inflation data from the Office for National Statistics (ONS) showed UK consumer prices increased at their fastest annual rate for 30 years in January. Prices surged by 5.5% from a year ago, up from 5.4% in December. This was driven by the least generous January clothing and footwear sales since 1990. 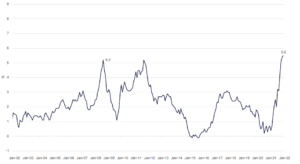 The data has fuelled expectations that the Bank of England will raise interest rates again when its monetary policy committee meets in March. Last week also saw evidence of a further tightening in the labour market, which could put upward pressure on wages and, in turn, increase the chances of a rate hike. The number of workers on payroll increased by 108,000 to a record 29.5 million in January. Labour shortages continued, with the number of open positions rising to a record level of almost 1.3 million in the three months to January.

US retail sales better than expected

US retail sales increased by the most in ten months in January, surging by 3.8% month-on-month to their highest level since the government started tracking the series in 1992. The increase was far higher than the 2.0% rise expected by economists in a Reuters poll, and led to comments that there is strength in the economy despite the recent fall in consumer sentiment.

However, the strong rebound was partly in response to a weak finish to 2021, when December sales fell by a downwardly revised 2.5%. Sales were also inflated by higher prices. Separate data from the Labor Department showed producer prices rose by 1.0% in January, the most in eight months and well above forecasts.

US weekly jobless claims unexpectedly rose by 23,000 to 248,000 in the week ending 12 February, the first increase in a month and above the 219,000 applications forecast by a Reuters poll. However, this was still below pre-pandemic levels and did not change economists’ expectations for another month of employment gains in February.

Economists blamed the rise on week-to-week volatility in the data and harsh weather conditions in some parts of the US. Freezing temperatures also depressed homebuilding in January, with housing starts falling by 4.1% to a seasonally adjusted annual rate of 1.638 million units. Single-family housing starts, which account for the biggest share of homebuilding, dropped 5.6% to a rate of 1.116 million, according to the Commerce Department.

Over in Japan, figures showed a relaxation of Covid-19 restrictions fuelled a boost in consumer spending and a rebound in the economy during the fourth quarter of 2021. Gross domestic product (GDP) rose by 5.4% year-on-year after contracting by 2.7% in the third quarter, according to the Cabinet Office. However, analysts have warned the economy may have lost steam in the first quarter of 2022 as Omicron hit manufacturing production and domestic travel. For 2021 as a whole, Japan’s GDP grew by 1.7% – the first increase in three years.

The Metaverse is the Next Big Thing – But What Is It Exactly?