Stock markets were mixed last week as UK inflation hit its highest level in nearly ten years amid surging energy prices. The FTSE 100 fell 1.7% with high inflation and an increase in employment fuelling speculation that the Bank of England will raise interest rates next month. The pan-European STOXX 600 slipped 0.1% as an increase in the number of Covid-19 infections prompted several countries to reintroduce restrictions to curb the spread of the virus. US indices fared better, with the Nasdaq hitting a new intraday high on Friday and ending the week up 1.2%, powered by technology stocks. The S&P 500 also rose, whereas the Dow recorded its second-consecutive weekly loss, finishing down 1.4%, as banking, energy and airline stocks slumped on fears of full lockdowns across Europe.

Japan’s Nikkei 225 managed a 0.5% gain after the government approved a larger-than-expected spending package to cushion the economic blow of the pandemic.

Powell to chair Fed for second term
Major indices were mixed on Monday (22 November) as investors digested the news that US President Joe Biden had nominated Jerome Powell as chair of the Federal Reserve for a second term. Biden cited the ‘decisive action’ Powell took during the early stages of the pandemic as a reason for the reappointment. Bank stocks and Treasury yields rose following the decision, but concerns about increasing Covid-19 infections in Europe weighed on investor sentiment. The Dow edged up 0.1% whereas the S&P 500 and the Nasdaq lost 0.3% and 1.3%, respectively. The FTSE 100 managed a 0.4% gain as telecom stocks rose following private equity firm KKR’s $12bn takeover bid for Telecom Italia. The STOXX 600 was 0.1% softer as investors feared Germany would follow Austria in imposing a full lockdown.

The FTSE 100 was 0.6% lower at the start of trading on Tuesday, while the STOXX 600 looked to be on track for its worst day in nearly two months, amid ongoing fears about Covid-19 restrictions.

UK inflation hits 4.2% in October
Consumer prices in the UK rose at their fastest pace in nearly a decade in October, hitting 4.2% on an annual basis. The Office for National Statistics (ONS) said this was mainly because of higher fuel and energy prices, although the cost of second-hand cars and eating out also increased. The figure was far higher than the 3.1% annual rise seen in September and more than double the Bank of England’s 2% target. Speculation that the Bank of England will raise interest rates in December intensified further after figures showed the number of payrolled employees increased by 160,000 to 29.3m between September and October. Huw Pill, the Bank’s chief economist, was quoted in the Financial Times as saying the ‘burden of proof’ had shifted and that policymakers would have more explaining to do if they left interest rates unchanged than if they raised them. “I’m looking perhaps for reasons not to hike rates,” he said.

Despite soaring prices, GfK’s consumer confidence index rose three points in November to -14, better than the -18 forecast by economists. There was a seven-point jump in the sub-index of whether people think this is the right time to make big purchases. Meanwhile, the latest UK retail sales figures from the ONS showed sales rose 0.8% in October from the previous month, following no growth in September, as people shopped earlier than usual for Christmas presents.

US retail sales record biggest jump since March
Retail sales in the US also rose in October for the third consecutive month in a row. The 1.7% month-on-month increase was the largest gain since March and topped economists’ expectations for a 1.4% rise. 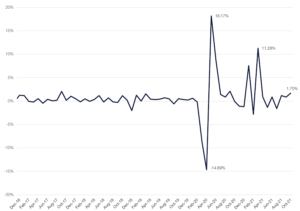 Sales were up by 16.3% from a year ago and are now 21.4% above their pre-pandemic level. Several retailers noted there had been an earlier start to Christmas shopping. The data suggests the recent surge in US inflation – it hit its highest level in three decades in October – hasn’t yet dampened spending, despite consumer sentiment falling to a ten-year low earlier in the month.

Austria has become the first western European country to reimpose a full national lockdown since vaccines became widely available. As of 22 November, people will only be able to leave their homes for specified reasons, such as buying essential groceries and going to the doctor. The lockdown is expected to last for a maximum of 20 days, and comes amid a spike in infections to 15,809 on Friday.

Several other European countries have introduced measures that aim to stem the spread of the virus, ranging from a partial lockdown in the Netherlands to restrictions for the unvaccinated in Germany and mandatory face masks in Spain and Poland. It comes after the World Health Organization warned that Europe could see 500,000 more Covid-19 deaths by February unless measures were tightened. The restrictions led to protests in Belgium, the Netherlands, Austria, Croatia and Italy over the weekend.