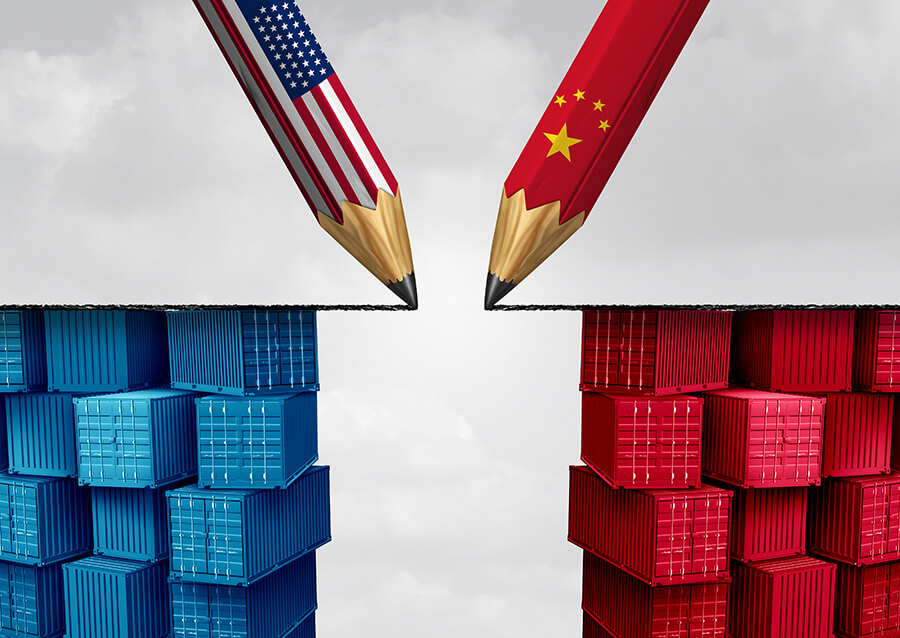 LET PHASE TWO COMMENCE!
China’s Vice Premier, Liu He, headed to Washington for the signing of the Phase One Trade Deal.  This represents the first concrete de-escalation of tensions between the US and China in nearly two years. The agreement covered items spanning intellectual property protection, market access openings, currency and merchandise trade. The US also stated that current tariffs would be maintained, whilst China committed to a number of large purchases from the US (including manufactured goods, agricultural products, energy and services amounting to USD 200bn in total). As a prelude to the meeting, the US Department of the Treasury issued its semi-annual currency report, within which it rescinded its designation of China as a currency manipulator. The US justified its decision based on the recent strengthening of the Renminbi against the US dollar, which has occurred amid firming investor sentiment in advance of the trade accord. Now that Phase One is behind us, let Phase Two commence!

UNITED STATES
S&P 3,330 +1.97%, 10yr Treasury 1.82% +0.19bps, HY Credit Index 279 +1bps, Vix 12.10 -.46Vol
Investor sentiment was positive in the US, as stock markets headed north. Sentiment improved after the US Treasury’s announced the removal of China from the list of currency manipulators. Later, the announcement of the Phase One Trade Deal further bolstered investors’ risk appetite. As a result, by the end of the week, the S&P 500 rose 2%, whilst the Nasdaq Composite gained 2.3%. Meanwhile, the Treasury curve was broadly unchanged (the 10-year yield hovered at 1.82%).

ASIA
HSCEI 11,331 +1.33%, Nikkei 24,083.51 +0.20%,10yr JGB 0.01% +0bps, USDJPY 110.160 +0.60%
Investor sentiment in Asian stock markets was broadly supportive primarily due to the announcement of the Phase One Trade Deal between the US and China and secondarily due to the convincingly strong macro data from the US and China. In this environment the South Korean stock market delivered one of the strongest returns by rising 1.9% in USD. Chinese “H” shares (+1.3% in USD) and the Vietnamese market (+1.1% in USD) performed strongly as well.
The National Bureau of Statistics (NBS) reported that real GDP in China rose by 6% YoY in 4Q19, a rate unchanged from the third quarter of the year. In 2019 as a whole the economy expanded by 6.1%, compared with 6.6% in 2018. In the last quarter of 2019, services activity grew at a firm pace of 6.6% YoY, whilst industrial output growth accelerated to 5.8% YoY, aided by the recovery of automotive production.
Key takeaways from the latest GDP report are that (1) the recent policy focus on supporting investment and manufacturing has had the desired impact stabilising economic growth in 4Q19 and (2) as a result of the stabilisation real GDP growth could maintain slightly below 6% in 2020.
Foreign trade statistics from China surprised positively in December, exports grew 7.6% YoY in USD terms, whilst import growth accelerated to 16.3% YoY. In the meantime, M2 money supply growth accelerated to 8.7% YoY in December, exceeding the median market estimate.
The positive surprise in Chinese foreign trade and credit metrics could have been brought about by the policy support measures by the government and the central bank as well as by the improvement in business sentiment as both the US and Chinese administrations signalled that the Phase One Trade Deal was imminent.
Consumer price inflation in India accelerated to 7.4% YoY in December 2019, up from 5.5% YoY in November. The fact that consumer prices continued to accelerate in the last month of the year was not unexpected. Sharply rising prices of food products (primarily vegetables) remained the primary driver (food accounts for around 50% of the consumer price index). Our in-house core inflation gauge, which excludes the impact of food prices, stood at 3.4% YoY in December.

LATIN AMERICA
MSCI Lat Am 2,925 +0.24%
Investor sentiment in Latin America was mixed. Whilst the Mexican stock index rose 3% in USD, outperforming the majority of its regional peers, the Chilean benchmark lost 2.3% of its value (in USD).
Consumer price inflation in Brazil rose to 4.3% YoY in December — just above the 4.25% mid-point of the 2.75-5.75% target range set by the central bank. The acceleration was predominantly driven by an increase in the food and beverages category due to higher meat prices. This development may reflect a rise in swine exports to meet increased demand in China. This had the effect of decreasing local meat supply and pushing up consumer prices. Meanwhile, core inflation (which excludes food and regulated prices) remained benign throughout the year, reaching 2.8% YoY at end 2019.
Despite the recent uptick in inflation, the central bank will likely remain on an accommodative stance and could consider carrying on with cutting the key policy rate to further stimulate domestic demand.
General economic activity indicators in Colombia were moderately weaker in November, due to the disruptive nature of protests during the month. Retail sales volume growth slowed to 4.4% YoY. Meanwhile, manufacturing output contracted 1.5% YoY.
Despite some expected weakness in November, overall economic activity remains in line with growth close to the potential. According to the latest macro indicators, Colombia’s real GDP could grow by about 3.3% in 2019. Providing there are no further disruptions, the rate of GDP growth could be around 3% in 2020.
Economic activity in Chile contracted 3.4% YoY in November due to the social unrests. Economic weakness was broad-based, as both mining and non-mining output decreased in an annual comparison.

AFRICA
MSCI Africa 807 +0.06%
The majority of African stock indices gained during the week. South Africa’s TOP40 index rose 2% in USD, followed by Egypt (+1.7% in USD) and Morocco (+1.2% in USD).
South Africa’s central bank surprised by delivering a 25bp rate cut reducing the key policy rate to 6.25%. The central bank essentially argued that although lower interest rates could lead to a weaker currency, inflation would not be materially affected by the Rand’s depreciation due to the very weak aggregate demand that characterizes the domestic economy.
President Buhari signed the finance bill for 2020 into law, which amends several of Nigeria’s tax laws with the aim of boosting government income (through raising VAT from 5% to 7.5%) while simultaneously reforming the tax system to encourage private investment and support the growth of small and medium-sized businesses. The law also introduces a graduated scale for corporation tax, eliminates double taxation, hikes excise duties and tax foreign companies providing digital services.
The Kenyan president, Uhuru Kenyatta, carried out a mini-cabinet reshuffle, dismissing the agriculture minister, Mwangi Kiunjuri, and confirming the acting finance minister, Ukur Yatani, as a permanent appointment. The president intends the reshuffle to re-energise his ‘big four’ agenda of food security, health, housing and industry, while quieting the voices opposed to his political initiatives.
This week’s global market outlook is powered by Alquity www.alquity.com