The FTSE 100 gained 1.9% after UK gross domestic product (GDP) unexpectedly grew in November, thanks to a boost from the men’s football World Cup. Germany’s Dax also rallied 3.3% as GDP data pointed to a milder economic slowdown over winter.

In the US, the S&P 500 and the Nasdaq surged 2.7% and 4.8%, respectively, helped by gains in large technology stocks such as Amazon and Microsoft. Signs of easing inflationary pressures also helped to boost investor sentiment.

In China, the Shanghai Composite added 1.2% on hopes that demand will rebound over the next few months following the scrapping of the country’s zero-Covid policy. Economists in a Reuters poll projected growth of 4.9% this year versus an estimated 2.8% in 2022.

Stock markets were generally quiet on Monday (16 January) as US indices were closed for Martin Luther King Day. In Asia, however, the Nikkei 225 fell 1.1% after data showed a higher-than-expected 10.2% increase in wholesale prices in December. This added to speculation that the Bank of Japan (BoJ) could phase out its monetary stimulus and start raising interest rates. It comes less than a month after the BoJ surprised the markets by widening its tolerance range for ten-year government bond yields, as part of its yield curve control policy.

The FTSE 100 started Tuesday’s trading session in the red after data showed UK wages grew at their fastest rate in more than 20 years in the three months to November. Regular pay excluding bonuses rose by 6.4% year-on-year, although they were down 2.6% after adjusting for inflation. The unemployment rate rose slightly from 3.5% to 3.7%.

Last week, figures released by the Office for National Statistics (ONS) raised hopes that the UK may have avoided sliding into a recession in 2022. GDP grew by 0.1% in November, beating analysts’ expectations of a 0.3% contraction. The services sector was the main driver of growth, expanding by 0.2% as football fans headed to bars and pubs to watch the World Cup.

A technical recession is defined as two consecutive quarters of falling economic output. GDP fell by 0.3% in the third quarter and economists were expecting a similar fall in the fourth quarter. However, Darren Morgan, ONS director of economic statistics, told BBC Radio 4’s Today Programme that for the UK to enter a recession in the fourth quarter, GDP in December would need to contract by 0.6%.

The figures could add to pressure on the Bank of England (BoE) to continue raising interest rates. Markets currently expect the BoE to increase the base interest rate by 0.5 percentage points to 4.0% at its February policy meeting.

GDP figures for Germany were also better than expected. Despite the war in Ukraine, high energy prices and supply chain bottlenecks, the economy managed to perform well in 2022, with the services sector benefitting from the lifting of lockdown restrictions.

GDP grew by 1.9% in 2022 and exceeded its pre-pandemic level of 2019 for the first time. The Federal Statistical Office said growth was likely to have stagnated in the fourth quarter, suggesting the economic slowdown over winter will be milder and shorter than previously thought.

It came after a German government economic adviser told Reuters that domestic inflation had probably peaked thanks to falling global energy prices.

US monthly inflation falls for first time since 2020

Over in the US, the highly anticipated consumer price index (CPI) report showed month-on-month inflation fell in December for the first time since May 2020. Headline inflation eased by 0.1%, bringing the year-on-year increase to 6.5%, the lowest since October 2021. 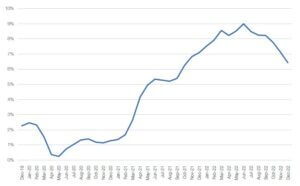 Digging into the details, petrol prices were 1.5% lower in December than a year earlier, while costs for used cars and trucks were down 8.8% year-on-year. Core inflation, which excludes volatile food and energy prices, eased to 5.7% year-on-year, according to the Labor Department.

Elsewhere, the University of Michigan’s preliminary reading of consumer sentiment rose by 8.2% month-on-month in January to its highest level since April 2022. Year-ahead inflation expectations receded for the fourth consecutive month to 4.0% from 4.4% in December. The inflation reading is the lowest since April 2021, but it remains well above the 2.3% to 3.0% range seen in the two years prior to the pandemic. Joanne Hsu, surveys of consumers director, warned that uncertainty over inflation expectations measures remains high, and changes in global factors in the months ahead may generate a reversal in recent improvements.