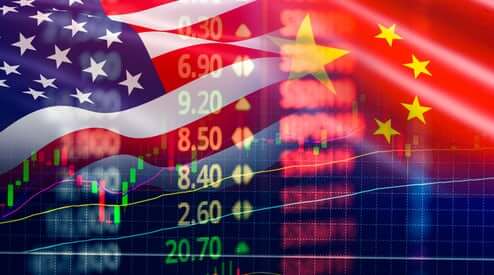 THANK YOU, NEXT…
The US and China have reached an agreement on a Phase One deal in which the US refrains from raising tariffs in December (scheduled for the 15th), whilst halving the 15% tariffs on goods worth about USD 125bn. China also committed itself to buying more agricultural products from the US (about USD 40bn annually), which is a considerable increase over the usual USD 20-25bn range. If everything goes according to schedule,  the final version of the Phase One deal could be signed as early as January or February, when Phase Two can commence (and which might overarch subsidies, cyber-intrusions, data storage and the remaining tariffs).
Whilst the deal could bring some certainty, encourage business confidence and strengthen investor sentiment, underlying global growth is unlikely to benefit from the agreement before 2Q20. Although the tone between the US administration and the Chinese government has become more constructive recently, the new rounds of negotiations could be noisy and the tone of the parties potentially volatile – similarly to what markets experienced throughout 2019.
Looking forward, it is likely the negotiations between the US and China will remain one of the key themes in 2020 as well as the Presidential elections in the US, and the Brexit talks between the UK and the EU. In addition, 2020 should bring answers to the billion-euro question of whether the German government is willing to start spending in order to aid the ailing German economy.

The mood was positive during the week, which in turn benefitted stock markets in the US. Chair Powell hinted that the Fed funds rate could remain on hold throughout 2020 in the context of benign inflation and a strong domestic underlying growth momentum, whilst the US-China trade news flow turned more constructive, citing that the two parties agreed on a Phase One trade deal. In this environment, the S&P500 rose 0.7%, whilst the Treasury curve remained largely unchanged (the 2-year yield at 1.62%, whilst the 10-year yield at 1.83%).

EUROPE
Eurostoxx 3,757 +1.61%, German Bund -0.30% -0.30bps, Xover Credit Index 212 -5bps, USDEUR .899 -0.54%
An improvement in investor sentiment boosted European stock indices, as investors took the view that the great majority of the Conservative government will be sufficient to avoid a disruptive hard Brexit scenario. In addition, the ECB President Lagarde’s dovish remarks also contributed to the improvement in investor sentiment. Consequently, the UK’s FTSE100 index delivered one of the strongest returns within Europe (+3% in USD), whilst stock indices in the Euro Area’s four largest economies gained as well (ranging between 1.2-2.5% in USD). Meanwhile, sovereign bond yields in Germany were broadly flat (the 10-year yield hovering at -0.29%), whilst risk premia on the periphery declined (the Italian 10-year yield decreased 9bp to 1.26%).

ASIA
HSCEI 10,779 +4.58%, Nikkei 23,952.35 +2.20%,10yr JGB- 0.01% 0bps, USDJPY 109.500 +0.64%
The idea that the US and China would reach a Phase One trade deal and cancel raising additional trade barriers on the 15th December boosted investor sentiment, which in turn lifted the MSCI Asia Pacific ex. Japan index (+3.7% in USD). The South Korean market (+5.9% in USD), Chinese “H” shares (+4.6% in USD) and the Taiwanese stock index (+3.4% in USD) were among the strongest performers during the week.
The annual Central Economic Work Conference in China ended on the 12th December. The government acknowledged that China faces a more complicated situation with rising risks and challenges both on the external and the domestic side, whilst also highlighting ‘stabilisation’ as key for economic policies in 2020 (i.e. keeping employment, macro-leverage, consumer prices and the property market stable). Furthermore, the authorities reiterated their commitment to reforms with an emphasis on improving the legal environment to support the developments of the private economy (especially for SMEs), whilst accelerating reforms in the financial system.
Rising food inflation pushed Indian headline CPI inflation to 5.5% YoY in November. The acceleration of food price inflation was primarily driven by vegetable prices (+36% YoY) and pulses (+13.9% YoY). Consumer price inflation of other items remained stable.
The Philippine central bank left the key policy rate stable at 4% in line with the median market estimate. The Monetary Policy Committee left the door open for monetary policy manoeuvre should domestic inflation conditions allow.
Credit rating agency S&P improved Thailand’s credit rating outlook to ‘positive’ from ‘stable,’ whilst keeping the country’s rating at BBB+ (investment grade). The agency noted that ‘political uncertainty in Thailand has begun to ease with the return of an elected government.’ The ratings for Thailand reflect the country’s strong credit metrics, including a solid external balance sheet and liquidity, limited net general government debt, and a track record of orthodox monetary and fiscal policies, S&P said.

LATIN AMERICA
MSCI Lat Am 2,837 +3.81%
Investor sentiment was positive in the Latin American region, as the vast majority of the regional stock markets gained during the week. The Mexican benchmark delivered a very strong performance, as it rose 6.9% in USD. The Mexican index was followed by the Chilean benchmark (+5% in USD) and the Brazilian market (+2.9% in USD).
The Brazilian central bank reduced the key policy interest rate by 50bp to 4.50%, in line with market expectations. Although the Monetary Policy Committee acknowledged that the economic recovery has gained traction, it left the door open for further rate reductions in the future depending on the incoming macroeconomic data. In the meantime, credit rating agency S&P reaffirmed Brazil’s sovereign credit rating at BB- (non-investment grade), whilst revising the outlook to ‘positive’ (from ‘neutral’). According to the agency, there could be an upgrade in the sovereign rating in the next two years if structural reforms keep taking place.
The United States Trade Representative (USTR) and trade negotiators for Canada and Mexico reached an agreement on USMCA changes, with the proposal also accepted by the Democrats. Representatives hinted that the USMCA could be voted in US lower chamber as soon as this week.
In Argentina, incoming President Fernandez addressed the economic and debt situation by reiterating that growth is a precondition to pay the debt, and that Argentina is already in a ‘virtual default.’ Moreover, Mr. Fernandes said that the Macri administration issued a lot of debt without increasing production and generating the necessary dollars to pay it back, and that creditors are responsible for taking the risk of investing in a model that has failed several times.
In Colombia, both retail sales and manufacturing showed strong performance in October. Retail sales increased 7.4% YoY, whilst manufacturing rose 2.1% YoY.

AFRICA
MSCI Africa 769 +3.34%
Investor sentiment in African stock markets was mixed during the week. The MSCI South Africa index rose 3.8%, whilst the MSCI Africa ex. South Africa index was broadly flat. From a country standpoint, the Moroccan stock index rose 2.2% in USD, whilst the Egyptian (-2% in USD) and Nigerian (-1.3% in USD) declined.
Consumer price inflation remained very low in Egypt, as the headline gauge was 3.6% YoY in November. Meanwhile, core inflation – filtering out volatile prices, such as food and household energy – dropped to 2.1% YoY.
The inflation print in December could sharply bounce due to a base effect, which could bring the headline inflation measure to around the midpoint of the central bank’s 6-12% inflation target. Should inflation remain within the central bank’s target range in the coming months, the Monetary Policy Committee will most likely find further room for loosening financial conditions vis-à-vis the reduction of the policy rate.
Inflation in South Africa slowed further and reached 3.6% YoY in November. Slowing inflation was primarily driven by deflation in transport prices, deepening price deflation of fuel prices and a less steep non-alcoholic price increase. Meanwhile, core inflation decelerated to 3.9% YoY. This is the first time in eight years that core inflation fell below 4%.
This week’s global market outlook is powered by Alquity www.alquity.com