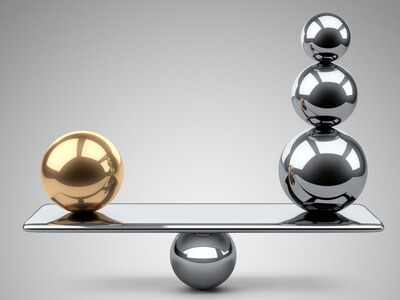 WEIGHING IT UP
Last week, there were a number of important data releases and events for markets:

UNITED STATES
S&P 2,787 +3.54%, 10yr Treasury 0.02% +3.32bps, HY Credit Index- 12 +1bps, Vix- 4.95 -5.21Vol
US equities rallied strongly last week, mostly on Friday post the employment report. Indeed, the Nasdaq touched a new all-time high.
With respect to the jobs’ numbers, payrolls came in well ahead of consensus at 313k, but the unemployment rate was unchanged at 4.1% thanks to a rise in the participation rate (63%, the highest since 2009). Most importantly, average hourly earnings slowed to 2.6%, with the previous month revised down to 2.7% (from 2.9%).
In contrast to equities, bond markets sold off. This is not necessarily contradictory; data is strong, and the FED will need to hike further (potentially 4 times this year), but the key point for equities, was that the data was not consistent with the need to deviate from the committee’s “gradual” mantra. Inflation data on Tuesday, could provide the next flashpoint.
Over on Capitol Hill, Donald Trump lost economic advisor Gary Cohen in protest at new steel and aluminium tariffs. More positively, it was announced that Mexico and Canada will be exempt from the measures (although this remains conditional on NAFTA negotiations), with other countries able to apply for exemption.

EUROPE
Eurostoxx 0 0.00%, German Bund 0.00% -0.80bps, Xover Credit Index- 18 -10bps, EURUSD 1,159.714 -0.93%
After the ECB meeting on Thursday, Mario Draghi confirmed that the governing council had voted unanimously to remove their easing bias (specifically to no longer promise an extension of asset purchases in the event of any deterioration). Growth forecasts were also upgraded, but inflation expectations for 2019 were marked down from 1.5% to 1.4%.
From a data perspective, the moderation in activity from December’s euphoric top was again confirmed with French and German industrial production coming in lower.
The CBT in Turkey left rates on hold at the March meeting.

ASIA
HSCEI 2,108 -1.28%, Nikkei 6,482.00 -2.33%,10yr JGB -0.02% 0bps, USDJPY .010 +0.12%
At their March meeting, the BOJ voted 8-1 to leave monetary policy unchanged, with Kataoka again dissenting in favour of more aggressive purchases. Moreover, BOJ Governor Kuroda suggested that any exit from yield curve control would have to wait until 2019, therefore tempering recent market speculation that better Japanese growth would prompt an early reduction of stimulus. Of course, the BOJ is known for its skittishness and it would not surprise us if Kuroda changes his rhetoric later in the year.
China’s National People’s Congress continued last week, with the key headline being the official annual growth target for 2018 being set at “around 6.5%”. This is similar to the 2017 objective, which was articulated as 6.5% or higher “if possible”. The fiscal deficit target was reduced versus last year, cut from 3.0% to 2.6% of GDP.
Beyond the economy, the National People’s Congress also passed constitutional amendments to remove presidential term limits. President Xi Jinping is now able to serve beyond 2023, the year which would have seen him forced to step down under the previous two-term limit system.
China also published its February data batch this week. CPI inflation accelerated (2.9% YOY vs 1.5% in January) while PPI contracted (from 4.3% to 3.7%). The trade balance rose from a revised US$20.4bn in January to US$33.7bn.
Inflation in the Philippines spiked up to a three-year high of 4.4% YOY in February, from 3.9% in January, partly on account of the impact of tax reform. Communication from the central bank continues to suggest, however, that rates are likely to remain on hold until the transient impacts of tax reform can be understood and isolated from the underlying inflation drivers.
Malaysia kept rates on hold at 3.25% in line with expectations.

LATIN AMERICA
MSCI Lat Am 3,192 -1.61%
Colombia’s CPI inflation dropped remarkably once again, from 3.68% YOY in January to 3.37% in February, its lowest level since October 2014 and further converging towards the Banco de la Republica target. The downward trend is mainly explained by the fading of the VAT hike effect, a stable to appreciating COP, and a large output gap.
This provides further room for the central bank to continue with its easing cycle in the coming months.
In Colombia, polls highlight a surge in voting intentions in favour of market-friendly and centre-right candidate Ivan Duque, the candidate endorsed by former President Álvaro Uribe and member of Centro Democrático party.
A stable to improving macro-economy, rebalancing fiscal and current accounts, and the fading of political risk should be supportive for Colombian assets.
Brazil’s industrial output climbed 5.7% YOY in January, picking up from 4.5% in the previous month.
Mexico’s economic slowdown is confirmed:

Chile’s business confidence keeps cranking up and reached 57.4 points in February 2018, its highest level in almost 5 years.
This is the first step of the virtuous cycle: investments, employment, consumption, profits, and reinvestment. Increasing copper prices also provide a tailwind and indirectly benefit the whole economy.
Peru’s Central Bank lowered its monetary policy rate from 3.00% to 2.75%, as inflation is in the lower part of the target range (1% – 3%) with a downward trend expected to continue.

AFRICA
MSCI Africa 1,068 +4.89%
South Africa’s economy beat expectations in Q4 2017, growing 3.1% QOQ compared to 1.8% expected, and a total of 1.3% in 2017 compared to 0.6% in 2016. The largest positive contributor in the fourth quarter was the agriculture, forestry and fishing industry, which expanded by 37.5% and contributed 0.8% to GDP growth.
The rebound in Q4 2017 was driven by cyclical recovery, particularly in agriculture, where the negative impacts of the drought in 2016 began to fade out and provide a favourable base effect. Given the subsequent change in political leadership which makes passage of economic reforms more likely, and has already seen business confidence hit a 2.5 year high, positive momentum could be expected to continue in to 2018, with positive contributions coming from a broader range of  industries going forward.
The IMF stated that the Kenyan government has committed to policies that will reduce the fiscal deficit and substantially modify interest controls, in order to secure a 6-month extension of the USD 1.5bn standby credit facility currently in place. Elsewhere, in a surprise meeting on Friday, Kenya’s president Uhuru Kenyatta and opposition leader Raila Odinga promised to work together to unite the country after elections last year in which around 100 people were killed, and the results disputed.
Moving on to strong set of data prints across Africa’s main markets: