Stock markets were mixed last week as coronavirus cases rose in China, and the US Federal Reserve vowed to tackle inflation.

The Shanghai Composite fell 0.9% as cities across China reimposed restrictions designed to stem the spread of Covid-19. A senior health official said Shanghai, which recently ended a two-month lockdown, faces a “relatively high” risk of further community transmission of the virus.

The UK’s FTSE 100 edged up 0.4% as prime minister Boris Johnson announced his intention to resign, after more than 50 ministers and several Cabinet members stepped down. Johnson will remain as caretaker prime minister until a new leader of the Conservative Party has been chosen.

In the US, the S&P 500 ended its holiday-shortened trading week up 1.9%, lifting it out of bear market territory. Friday’s payrolls report from the Labor Department showed employers added 372,000 non-farm jobs in June, well above expectations of around 270,000.

* Data from close on Friday 1 July to close of business on Friday 8 July.
1Closed on Monday 4 July.

Stocks started this week in the red amid concerns that a temporary halting of Russian natural gas supplies to Germany could become permanent. Gas supplies via the Baltic Sea pipeline Nord Stream 1 were halted for ten days from Monday for annual maintenance work. However, there are fears the shutdown could be extended and exacerbate Europe’s gas crisis.

Germany’s Dax fell 1.4% on Monday (11 July) while the STOXX 600 declined 0.5%. Hong Kong’s Hang Seng tumbled nearly 3% after Beijing regulators issued fines to several technology firms for non-compliance with anti-monopoly disclosure rules. US stocks were also weaker ahead of the release of the latest inflation data.

The FTSE 100 was down 0.4% at the start of trading on Tuesday following a weak session in Asia overnight.

Last week saw the release of the Federal Reserve’s June policy meeting minutes, in which officials emphasised the need to fight inflation through further interest rate hikes. Members of the Federal Open Market Committee said the July meeting would likely see a further increase in rates of 50 or 75 basis points (bps), following a 75-bps hike in June. Members said the June increase was necessary to control inflation, which is at its highest level since 1981.

“Participants concurred that the economic outlook warranted moving to a restrictive stance of policy, and they recognised the possibility that an even more restrictive stance could be appropriate if elevated inflation pressures were to persist,” the minutes said.

Members acknowledged that raising interest rates could slow the pace of economic growth, but said returning inflation to 2% was “critical to achieving maximum employment on a sustained basis”. Fed officials expect US gross domestic product to rise by just 1.7% this year, down from the March estimate of 2.8%.

There was evidence of a slowing US economy in the latest S&P Global services purchasing managers’ index (PMI). The business activity index dropped for the third month running from 53.4 in May to 52.7 in June. Although business activity remained above the 50-point mark that separates growth from contraction, it was the weakest rise in activity since January. 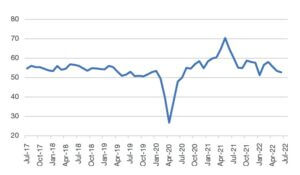 New orders fell for the first time in nearly two years as sustained price pressures and economic uncertainty hit demand. Confidence about the year ahead also dropped to a 21-month low, while the rate of input cost inflation slowed from May’s survey but was still among the fastest since the series began in October 2009.

Meanwhile, the US manufacturing PMI fell from 57.0 in May to 52.7 in June, the lowest for almost two years, led by a near-stagnation of factory output and the first fall in new orders since May 2020.

The volume of retail sales in the euro area rose by a seasonally adjusted 0.2% month-on-month in May, missing economists’ forecasts of 0.5% growth, according to data from Eurostat. This followed a 1.4% drop in April, which was revised down from initial estimates of a 1.3% drop.

The UK housing market defied expectations of a slowdown in June with average property prices rising by 1.8%, the biggest monthly increase since early 2007, according to Halifax. On an annual basis, prices rose by 13% and pushed the typical UK house price to another record high of £294,845.

Russell Galley, managing director at Halifax, said the supply-demand imbalance continued to be the reason behind the sharp increase in house prices. “Demand is still strong – though activity levels have slowed to be in line with pre-Covid averages – while the stock of available properties for sale remains extremely low,” he said.

Galley added that while a slowing of house price growth may come later than previously anticipated, it should still be expected in the months ahead as increased pressure on household budgets and higher interest rates impact affordability.

How to Make the Most of Life in Retirement