Global equities rebounded last week as fears about the spread of Omicron and its impact on economic growth subsided.

The S&P 500 recorded its biggest weekly gain since February, rising 3.8% following news that the first cases of Omicron in the US appeared to be mostly mild. The Dow and the Nasdaq advanced 4.0% and 3.6%, respectively, despite a surge in the latest inflation reading.

The positive sentiment continued in Europe, where the STOXX 600 climbed 2.8% after Pfizer and BioNTech said a booster jab of their coronavirus vaccine appeared to be an effective defence against the new variant. The FTSE 100 added 2.4% despite UK prime minister Boris Johnson confirming a move to ‘Plan B’ restrictions. Stock markets in Asia also rose, with Japan’s Nikkei 225 and China’s Shanghai Composite up 1.5% and 1.6%, respectively.

Investors await central bank policy decisions
Stocks started this week in the red, with the FTSE 100 and the S&P 500 down 0.8% and 0.9%, respectively, at the close of trading on Monday. Fears about the spread of Omicron resurfaced, with cases surging in the UK in particular. Airline shares were hit the hardest amid concerns new travel restrictions could be imposed to stem the spread of the virus. There were also some nerves ahead of this week’s raft of policy meetings, including the Federal Reserve, Bank of England, European Central Bank (ECB) and Bank of Japan. The ECB is expected to halve the amount of assets it buys each month from April.

The FTSE 100 was up 0.6% at the start of trading on Tuesday as investors considered the latest jobs data from the Office for National Statistics (ONS). In the three months to October, UK unemployment fell by 127,000 from the previous quarter to 1.4m, while the unemployment rate declined to 4.2% from 4.3%. The number of workers on company payrolls rose by 257,000 in November from the previous month to 29.4m – almost half a million higher than pre-pandemic levels.

US inflation highest since 1982
The latest US inflation data, published last week, revealed the consumer price index (CPI) hit its highest level in 39
years in November, rising by 6.8% on an annual basis. The figures from the Bureau of Labor Statistics showed
increases across the board, with fuel, housing, food and cars the biggest contributors to growth. Fuel prices were
up by 58.1% from a year ago. 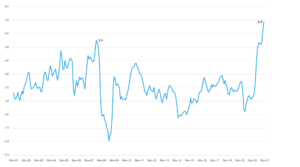 Many investors were bracing themselves for an increase of 7% or more, which meant stocks rose despite the eyecatching
numbers. On a monthly basis, the inflation rate eased slightly, with prices up 0.8% compared to October’s 0.9% gain.

The report came a day after figures showed US weekly jobless claims tumbled to 184,000 for the week ending 4 December. This was the lowest since 1969 and below the 211,000 reading forecast by economists. With employment strong and inflation high, there is growing speculation that the Federal Reserve will increase interest rates as soon as the middle of 2022.

UK GDP growth slows sharply
In the UK, supply chain disruption and a decline in dining out resulted in gross domestic product (GDP) growing by just 0.1% in October from the previous month. This marked a sharp slowdown from the 0.6% growth seen in September and was below expectations of a 0.4% rise.

The construction sector saw its largest fall in output since April 2020, declining by 1.8% following a 1.3% rise in September. The ONS said output is now 2.8% below its pre-pandemic level, which reflects rising input prices and delays to the availability of products such as steel, concrete, timber and glass.

Accommodation and food service activity fell by 5.5%,although overall services output rose by 0.4% as the continued rise in face-to-face appointments at GP surgeries boosted human health activities by 3.5%.

House prices continue to soar
UK house prices continued to soar in November on the back of an ongoing decline in new listings. According to a RICS survey, a net +71% of respondents cited an increase in prices and a net +66% expect prices to keep rising over the next year. RICS said a drought in new listings was holding back the market and driving competition between prospective buyers.

“Unless this trend is reversed soon, transaction levels may flatline in 2022 with limited choice proving more significant than any shift in the interest rate environment for new buyers,” said Simon Rubinsohn, chief economist at RICS.

China CPI rises 2.3%
Over in China, the official CPI rose by an annualised 2.3% in November, up from 1.5% in October, according to the National Bureau of Statistics. This was its highest level since August 2020, but was below economists’ expectations. Excluding volatile food and energy prices, core inflation rose by 1.2% from a year ago. The producer price index, which reflects the prices factories charge wholesalers for products, increased by 12.9% in November, down from the 26-year high of 13.5% in October.

What is Impact Investing, and Is it a Good Investment Strategy?