These hopes were quashed towards the end of the week as signs of labour market strength and a cut to oil production led to renewed inflation fears. After jumping 5.6% on Monday and Tuesday, its biggest two-day gain since 2020, the S&P 500 finished the week up 1.5%. The Dow and Nasdaq added 2.0% and 0.7%, respectively.

UK and European shares also rose, despite a jump in eurozone producer prices and signs of a deepening economic slowdown in Germany. The FTSE 100 gained 1.4% and Germany’s Dax rose 1.3%.

In Asia, Japan’s Nikkei surged 4.6%, although sentiment soured towards the end of the week following hawkish comments from US Federal Reserve officials. China’s stock markets were shut all week for the National Day / Golden Week holiday.

* Data from close on Friday 30 September to close of business on Friday 7 October.

The Bank of England (BoE) announced on Monday (10 October) that it had doubled the size of its temporary bond-buying programme, which it introduced following the market turmoil created by the government’s mini-budget announcements.

The BoE doubled the size of daily auctions to a maximum of £10bn from £5bn previously, in an effort to “support an orderly end” of the scheme, which is due to conclude on 14 October. Chancellor Kwasi Kwarteng also confirmed yesterday that his medium-term fiscal plan would be brought forward from 23 November to 31 October.

The FTSE 100 slipped 0.5% on Monday as Russian attacks on the Ukrainian capital of Kyiv sparked concerns the war could escalate further. Wall Street stocks also declined after JPMorgan chief executive Jamie Dimon warned of a US recession in six to nine months. The downbeat mood continued into Tuesday, with the FTSE 100 down 0.8% at the start of trading.

The release of the closely watched US nonfarm payrolls report last Friday cemented expectations that the Federal Reserve will increase interest rates by another 0.75 percentage points at its next meeting in November. Although the pace of jobs growth cooled in September, the unemployment rate unexpectedly dropped.

According to the Department of Labor, the US economy added 263,000 jobs in September. This was below than the 315,000 positions created in August, but was higher than forecasts for 250,000 new jobs. 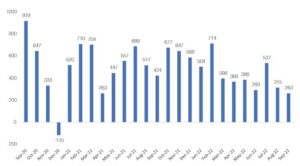 The unemployment rate edged down to 3.5% from 3.7% the previous month, while the participation rate – the percentage of people working or actively looking for work – slipped to 62.3% from 62.4%, suggesting competition for workers is likely to remain high. Average hourly earnings increased by 0.3% month-on-month, but the annualised rise slowed slightly to 5.0% from 5.2% in August.

Economic activity in the US services sector slowed slightly in September, according to the Institute for Supply Management’s (ISM) purchasing managers’ index (PMI). The index measured 56.7 in September, which was 0.2 points lower than August’s reading of 56.9. The new orders index slipped to 60.6 from 61.8, while a gauge of prices paid by services industries for inputs dropped to 68.7, the lowest since January 2021.

It came after separate data from ISM showed US manufacturing activity grew at its slowest pace in nearly two-and-a-half years in September. The manufacturing PMI dropped to 50.9, reflecting “companies adjusting to potential future lower demand”, ISM said. A measure of prices paid by manufacturers dropped to 51.7, the lowest reading since June 2020, largely due to falling commodity prices.

Whereas US economic data showed some signs of easing inflationary pressures, the opposite was true in the eurozone. According to Eurostat, factory gate prices in August rose by 5.0% month-on-month and by 43.3% year-on-year, driven by increasing energy costs. Meanwhile, S&P Global’s eurozone composite PMI showed cost pressures intensified in September for the first time since March, again reflecting sharply rising energy costs as well as higher wages.

S&P Global said output in both the manufacturing and service sectors fell at a quicker rate in September as high inflation, soaring energy costs, rising economic uncertainty and weakening demand drove the euro area economy into a deeper contraction. Total new orders fell at the fastest rate in almost two years, while a considerable drop was seen in export sales.

In Germany, there were further signs the country could be heading for a recession. Retail sales fell by 1.3% in August from the previous month, worse than the 1.1% dip forecast by analysts in a Reuters poll. Meanwhile, import prices in August were 162.4% higher than a year ago, and industrial output declined 0.8% month-on-month, the sharpest fall since March.

The German economy is expected to slide into a recession next year, according to reports by Reuters. Sources told the newswire that the government had cut its growth forecasts to 1.4% for 2022 and -0.4% for 2023, down from 2.2% and 2.5% previously. Official figures are due to be published on Wednesday.

Why Interest Rates Are Soaring (But Not for Savings Accounts)