Most global stock markets fell last week on concerns that rising inflation and interest rate hikes could push economies into a recession.

Shares in Europe also fell as eurozone inflation accelerated to a new record high. The STOXX 600 fell 1.4% and Germany’s Dax lost 2.3%. The FTSE 100 declined 0.6%, with a fall in the pound versus the dollar helping to limit losses.

Recession fears spread to Japan, where the Nikkei shed 2.1% as sentiment among large manufacturers deteriorated in the second quarter and factory output fell sharply in May. In contrast, China’s Shanghai Composite rose 1.1% as an easing of Covid-19 restrictions led to a bounce back in manufacturing and services activity.

* Data from close on Friday 24 June to close of business on Friday 1 July.

Stock markets rose on Monday (4 July) as supply concerns pushed up the price of oil, boosting energy shares. The FTSE 100, which has a heavy weighting towards the energy sector, rose 0.9%. The STOXX 600 gained 0.6%, giving back some of its earlier gains on news Germany’s trade balance fell into a surprise deficit of €1.0bn in May – its first monthly deficit since 1991. Analysts had been expecting a surplus of around €2.7bn.

US markets were closed on Monday for Independence Day.

The FTSE 100 was 0.1% lower at the start of trading on Tuesday. The S&P Global / CIPS UK composite purchasing managers’ index (PMI) edged up to 53.7 in June from 53.1 in May. However, new order growth was the weakest since early 2021, input prices were the second highest since the PMI started 26 years ago, and respondents were the gloomiest since May 2020 because of recession fears, high inflation and rising interest rates.

The closely watched US personal consumption expenditures (PCE) index, released last week, indicated a pullback in consumer spending. According to the Commerce Department, spending, which accounts for more than two-thirds of US economic activity, edged up by just 0.2% month-on-month in May – the smallest rise in five months. After being adjusted for inflation, spending declined by 0.4% following a 0.3% gain in April.

Encouragingly, the data showed a slight easing of inflationary pressures. Core PCE prices were 4.7% higher than a year ago, marking a 0.2% softening from the previous month. On a monthly basis, core prices increased by 0.3%, slightly less than the 0.4% rise forecast in a Dow Jones poll. Headline inflation rose 0.6% month-on-month following a 0.2% gain in April, which meant year-over-year headline inflation held at 6.3%.

Elsewhere, The Conference Board’s index of consumer confidence fell for a second consecutive month from 103.2 in May to 98.7 in June, the lowest level since February 2021. The expectations index, based on consumers’ short-term outlook for income, business, and labour market conditions, decreased sharply from 73.7 to 66.4, the lowest level since March 2013.

“Consumers’ grimmer outlook was driven by increasing concerns about inflation, in particular rising gas and food prices. Expectations have now fallen well below a reading of 80, suggesting weaker growth in the second half of 2022 as well as growing risk of recession by year end,” said Lynn Franco, senior director of economic indicators at The Conference Board.

Inflation in the eurozone hit a new record high of 8.6% in June as energy and goods prices soared, according to Eurostat. This was higher than the 8.4% annual increase forecast by economists in a Reuters poll and above the 8.1% rise seen in May. 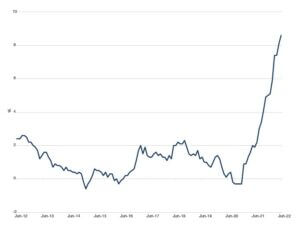 European Central Bank president Christine Lagarde reiterated guidance for a 25-basis-point increase in interest rates in July, which will be followed by another hike in September. Speaking about the potential path of interest rate hikes at the bank’s conference in Portugal, Lagarde said: “If the inflation outlook does not improve, we will have sufficient information to move faster. This commitment is, however, data dependent.”

Separate data showed economic sentiment in the euro area slipped to 104.0 in June from 105.0 in May. Consumer confidence and retail trade sentiment both declined, and households had a more pessimistic view on the economy and their prospects of making major purchases and savings.

China’s factory activity rose in June after three months of decline as the authorities ended the lockdown in Shanghai. The official manufacturing PMI rose above the 50-point mark that separates growth from contraction, increasing to 50.2 from 49.6 in May. A sub-index for production measured 52.8, up from 49.7 in May, while the new orders index rose to 50.4 from 48.2. The non-manufacturing PMI rebounded to 54.7 in June from 47.8 in May.

Meanwhile, the Caixin/Markit PMI, a private survey that focuses more on smaller firms in coastal regions, showed manufacturing activity expanded at the fastest pace in 13 months in June, rising to 51.7 from 48.1 the previous month.