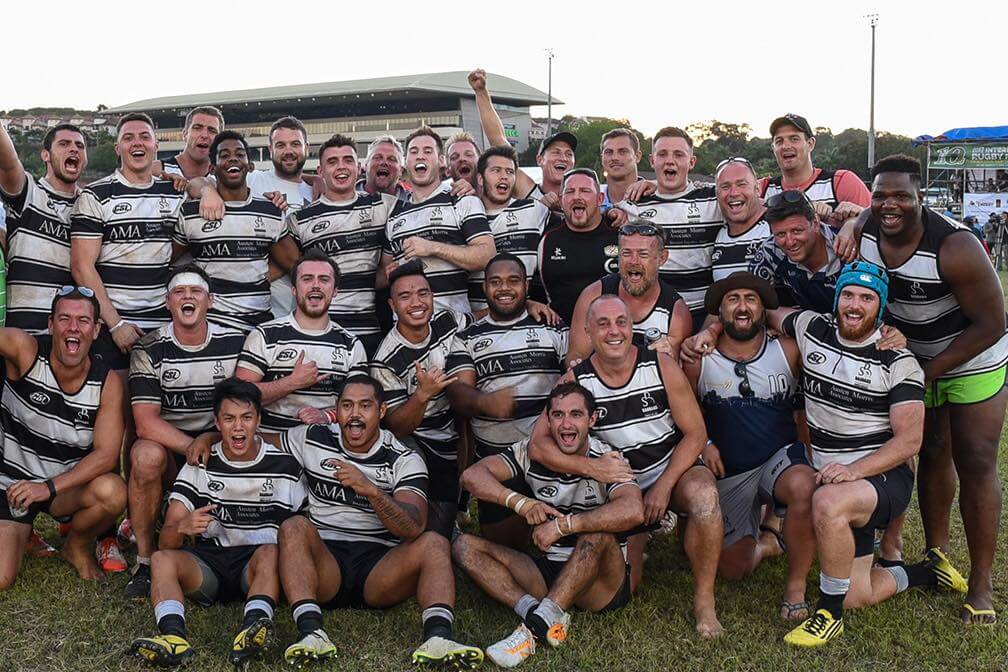 On Sunday 26th March 2017, in the late afternoon, the Austen Morris Associates Barbarians were crowned the 2017 Manila10s CUP CHAMPIONS with their 24-0 win in the final against the B2Gold Larriniks.
“The best social rugby tournament in the world”, as dubbed by ESPN, the Manila10s was recently held in Manila on 25th and 26th March 2017 at San Lazaro Leisure Park – a mixed-used venue which features a racetrack in Carmona, Cavite which is also home to the Manila Jockey Club. This was a new venue for 2017, and the event has been running since 1989.

This year’s event for the Manila10s featured a whopping 29 teams in 4 divisions of varying skill levels (Cup, Plate, Bowl, and Shield) as well as a separate veteran’s division for teams featuring only players over 35 that played through pool and qualifying rounds in the hope of making the Shield and Cup game playoffs.
Of these teams, AMA were proud sponsors of the Austen Morris Associates Barbarians and Vets teams who were part of the ‘visiting’ teams for this year’s Manila10s events. Austen Morris Associates has been in attendance at The Manila10s, sponsoring the Barbarians for the last three years. An annual event, we have come to love this weekend, which provides spectators with some seriously good sports, fantastic fun in the sun, and nail-biting action over two days.
Our AMA team from the Manila office spent the weekend there

cheering the Barbarians and vets on, where the sun was shining, beer was flowing, and the competition was fierce. Playing in Division 1, Group B, the Barbarians were able to keep ahead of the pack on Saturday winning 7-0 against the Alabang Eagles, and 17-7 against The Blues, Malaysia, with a final game 20-0 in the pool games.

The AMA Barbarian Vets team also featured in the Saturday pool games, where they faced some tough competition. Playing against The Extinct Volcanoes, it was a close game of 7-5 to the opposing team and although they brought some brute to the footy field, The Flatplanet Fiji Golden Oldies also won 12-0. We would like to congratulate the entire AMA Barbarian Vets on games well played!

Moving into Sunday, the pressure was on for the Barbarians team to continue their winning streak. And with The New Zealand Warriors remaining the dominant Cup winners over the past years, and who have met with the Austen Morris Associates Barbarians in previous years at the finals, where we have placed 3rd overall, we had big shoes to fill to bring the cup ‘home’.
Sun blazing, and facing some tough competition with teams at this year’s event, the Austen Morris Associates Barbarians remained strong throughout, and their determination paid off. They did not disappoint. The halftime score in the CUP FINAL for the AMA Barbarians against the Larrikins was a nail-biting 7-0.
We would like to extend our congratulations to the entire team for their superb skills on the field and these fantastic results. CHAMPIONS for 2017, we look forward to being back in Manila to defend our title at the Manila10s next year.

We would also like to thank everyone from partners to clients and friends who made it to the San Lazaro Leisure Park to support not only the Austen Morris Associates Barbarians & Vest, but all of The Manila10s teams.