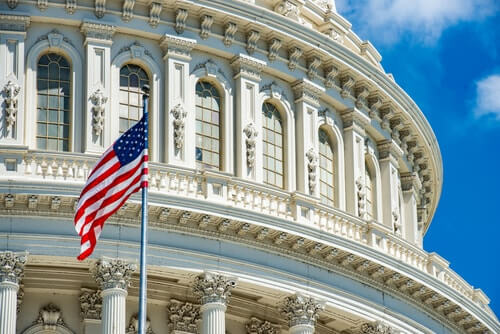 After battles with the courts and with Senate, it’s started to look like President Trump will struggle to generate any real change domestically. Last week suggests that the US President might switch his attention to geopolitics.
Markets responded to Trump’s new effort at exerting his influence with apprehension rather than panic. The VIX index (measuring implied variance) jumped to the highest level since November (north of 16%). However, realised volatility remained very low at around 5% for the week. Similarly, risk aversion prompted a rally in bonds, with the US 10-year yield at a 2.23% 5-month low, but the S&P 500 lost only 1.13%.The first round of the French Presidential election is on Sunday.
UNITED STATES
S&P 2,349 -1.13%, 10yr Treasury 2.24% -14.48bps, HY Credit Index 344 +11bps, Vix 14.66 +3.09Vol
Ahead of the Easter holiday break, equity volumes were extremely low, with Monday the lowest volume day of the year. Consumer sentiment data for April continued the blockbuster confidence regime, whilst PPI inflation declined – inflationary pressures globally appear to be receding after a few months of strength. The Bank of Canada left overnight interest rates unchanged at 0.50%. This was despite upgrading its growth projections for 2017 (2.5% from 2.1%) and instead highlights expectations for inflation “to dip in the months ahead” and “material slack” in the labour market, in contrast to the US. Elsewhere, Moody’s said Canada is one the four countries most vulnerable to a housing correction (alongside Australia, New Zealand and Sweden). The Bank’s Governor (Poloz) implied agreement commenting “I think it’s timely to remind folks that prices can go down as well as up”.

EUROPE
Eurostoxx 3,448 -1.15%, German Bund 0.19% -4.10bps, Xover Credit Index 295 -11bps, EURUSD 1.065 -0.22%
Ahead of the first round of the French Presidential elections, polls suggest Le Pen and Macron are sitting in pole position to face off in round two, with approximately 23% of the vote. In the background, far left candidate Mélenchon has seen a significant rise in popularity and now sits level with conservative candidate Fillon in third place. The “black swan” outcome is for Mélenchon to reach the second round, at which he would have a much better chance of winning than Le Pen.
Eurozone Industrial Production fell in February, in another example of hard data contradicting buoyant surveys. UK unemployment for February hit 4.7% (lowest since 1975). However, average weekly earnings reported the slowest rate of growth since 2014 at 2.3%. Given rising CPI inflation, this suggests pressure on real wages across Britain.
In a result that prompted the Foreign Policy Group to pen an obituary for the country and CNN to declare “democracy died”, Turkey voted to support President RecepTayyipErdogan’s push for an executive presidency with 51.4% of the vote. The result will be contested – for example unsealed ballots were counted (in contravention to rules) and there was evidence of intimidation. As such the opposition has yet to concede defeat. In any case, the result will turn Turkey’s parliamentary system into a presidential one via 18 amendments to the constitution. These include scrapping the post of Prime Minister and immunity from prosecution for the President alongside largescale control of the judiciary. Erdogan has also said the country should hold a referendum to reintroduce the death penalty, thus ending any remaining prospects of joining the EU.
The Ukrainian Central Bank cut rates to 13% on the basis that recent inflation is likely to be transitory

ASIA
HSCEI 1,008 -0.74%, Nikkei 1,841.00 -0.52%, 10yr JGB 0.05% +0bps, USDJPY 109.040 -2.20%
The Chinese economy grew faster than expected in Q1 2017, registering a growth rate of 6.9% YOY. Consensus expectations were for growth to register at 6.8% during the first three months of 2017, in line with Q4 2016.  The granular activity data points also made for bullish reading, with March industrial production (+7.6% YOY), retail sales (+10.9% YOY), fixed asset investment (+9.2% YOY) all coming out ahead of market expectations. The systemically important property sector also continues to perform strongly, despite targeted tightening measures designed to take froth out of the market (though misinterpreted by some as the government attempting to engineer a broad-based deceleration across one of the most important sectors in the Chinese economy), with floor space sold up 14.7% YOY in March and new housing starts up 13.1% YOY.  On the external side, trade data also came out strong (exports +16.4% YOY, imports +20.3% YOY) whilst credit growth began to show the impacts of the central bank’s measures to de-risk the system by disincentivising the most risky forms of lending and punishing institutions with the riskiest funding models, with loan growth slowing moderately to 12.4% YOY in March from 13.0% in February. Inflation data contained no surprises, with March CPI +0.9% YOY slightly below expectation of +1.0%, while PPI came in at +7.6% YOY, in line with expectation.
The Bank of Korea left interest rates on hold as expected at 1.25% for the 10th consecutive meeting. The MPC guided that the stance of monetary policy was likely to remain accommodative for the rest of 2017, though released positive forecasts for economic growth, revising up its GDP outlook for 2017 by 10bps to 2.6% YOY.  India’s consumer price inflation rate rose slightly, from 3.7% YOY in February to 3.8% in March. This remains in keeping with the central bank’s medium term inflation target of 4% and does little to change the outlook for stable rates in India for the next 2-3 quarters.

LATIN AMERICA
MSCI Lat Am 2,651 -1.61%
The central bank of Brazil cut the SELIC interest rate by 100 bps to 11.25%, as expected. The decline in inflation and firmly anchored long-term inflation expectations allowed the BCB to operate the largest real rate cut of any major economy globally. The market is now expecting nominal interest rates around 8.5% by the end of the year.  Inflation in Brazil is now almost at the target (4.5% ± 1.5%), since the IPCA declined to 4.57% YOY in March from 4.76% in February.
Argentina’s Central Bank increased the reference rate by 150bps to 26.25%, as inflation is not decelerating as fast as expected. The pace of deceleration was encouraging in 2H16 but subsidy cut and tariff normalisation slowed down the disinflationary trend.  Real interest rates have always remained in positive territory; the central bank is building its credibility implementing an orthodox inflation-targeting regime. Credible institutions bode well for the long-term economic prospects of the country. Put into perspective, the disinflationary trend remains a reality but may take a bit longer than expected before reaching the central bank target. Inflation numbers will also be influenced by a currency close to overvaluation.
S&P cut to CCC-, close to default, from B- the foreign and local currency sovereign credit rating of El Salvador, while placing on negative the credit watch, after the Central American state missed a pension payment.

AFRICA
MSCI Africa 829 +5.32%
Egypt’s annual headline inflation came in at 32.5% in March, driven by food and beverages prices, which increased by 43% YOY. Although this is the second rapid MOM deceleration in CPI, authorities must react to curb inflation, which is constraining the normalisation prospects of the economy.span style=”color: #00264b;”>Finally, Egypt is thinking of tightening its monetary policy. Following Sisi’s visit to the IMF in Washington, Lagarde said: “The IMF is working to help the government and the Central Bank bring inflation under control.” Sisi said Egypt is committed to pushing ahead with the reform program and cooperating with the IMF. The IMF will talk with the government and the central bank about how best to use budgetary restraint and tighter monetary policy to contain demand and so bring down inflation. As we’ve been advocating for a while, a stricter monetary policy is the main missing piece of the reform agenda in Egypt. Keeping real rates positive will anchor the currency; attract foreign capital and curb inflation. Over the longer run, Egypt must adopt the right policy mix (fiscal and monetary) and keep the current and budget balances under control.
South Africa’s manufacturing sector contracted 3.6% YOY in February. This contrasted positive signals from the manufacturing PMI index for February, which recorded 52.5 from 50.9 in January. While the PMI has been supported by the better terms of trade and declining inflation; new political risks have emerged as well as increasing interest rates (following debt downgrade from 2 of the 3 large rating agencies). This is likely to negatively impact business and investor confidence, challenging the current pace of a domestic economic cyclical rebound.
East Africa’s three biggest economies will likely suffer from the downturn in the credit cycle. Bank credit to the private sector in Kenya, Tanzania and Uganda is growing at the slowest pace in well over a decade. In Kenya, private lending growth was at 4.9% in December 2016, the slowest pace since 2003 and far below the record of 35.9% in 2011. In Tanzania, the increase was 5.2% in January, the lowest since 2000, while in Uganda it was 7.5% in February. This led the IMF and the World Bank in February cut their growth forecast for Kenya’s economy to 5.3% and 5.5% respectively in 2017/18 from a prior estimate of 6.1% and 6%, citing the credit slump and factors including drought. The World Bank also reduced its GDP estimate for Tanzania to 6.9% in 2016 from 7.2% in 2015, due to uncertainty over government policies and a slowdown in the private sector  After several years of excessively high credit growth and favorable external factors (floods of liquidity in international markets, low oil prices), it seems that on all fronts, East African economies are at the top of the cycle. Over the long-term, leverage cannot compensate for productivity growth and institutional strength.

How to plan your financial future