Global equities rose last week as major central banks struck a dovish interest rate, and US jobs data proved far stronger than expected. The FTSE 100 added 0.9% after the Bank of England surprised the markets by voting to keep interest rates unchanged. Germany’s Dax also rallied 2.3% as the European Central Bank (ECB) indicated that interest rates would stay low for some time. In the US, the S&P 500, Dow and Nasdaq added 2.0%, 1.4% and 3.1%, respectively, as the Federal Reserve stuck to its view that high inflation would prove transitory and would not necessitate an immediate rise in interest rates. Over in Asia, the Liberal Democratic Party’s solid win in Japan’s general election boosted the Nikkei 225 by 2.5%. In contrast, China’s Shanghai Composite lost 1.6% amid renewed Covid-19 restrictions and ongoing concerns about the country’s property sector.

* Data from close on Friday 29 October to close of business on Friday 5 November.

US stocks rise on passing of infrastructure bill.

Wall Street stocks started this week on a strong footing, with Congress’ approval of President Joe Biden’s infrastructure spending package leading to gains across the industrial and material sectors on Monday.
(8 November). The $1trn package, which was passed by the House of Representatives late on Friday, will provide new funding for transport, utilities and broadband, among other infrastructure projects. UK and European equities started the week on a more subdued note following a mixed session in Asia overnight. The FTSE 100 slipped 0.1% on Monday after a survey showed UK consumer confidence in October fell to its lowest level since March. However, the upbeat mood in the US boosted sentiment at the start of trading on Tuesday, with the blue-chip index managing a 0.1% gain.

The Bank of England surprised investors last week by voting to hold the base interest rate at its historic low of 0.1% despite surging inflation. Andrew Bailey, the Bank’s governor, said he was ‘very sorry’ that households were feeling the impact of rising prices, but that the Bank wanted to see what impact domestic and global issues were having on the cost of living before deciding on whether to raise rates. He told the BBC that current conditions were different because inflation was being driven by global supply shocks rather than demand pressure in the UK economy. The Bank signalled that the base rate could rise in the coming months amid forecasts that inflation is likely to hit 5% next year. Nevertheless, the pound fell against the dollar by 1.5% following the decision.

Investors were also speculating that the ECB would raise interest rates next year amid a 13-year high in the rate of inflation. However, ECB president Christine Lagarde said a rate increase would be ‘very unlikely’ to take place in 2022. She was quoted by Reuters as saying that despite the current surge in prices, the outlook for inflation over the medium term remains subdued, and therefore the ECB’s three conditions for a rate hike are unlikely to be satisfied next year. Lagarde also pushed back on expectations of a tightening in monetary policy, saying the ECB would continue to use emergency asset purchases to keep borrowing costs down. “An undue tightening of financing conditions is not desirable at a time when purchasing power is already being squeezed by higher energy and fuel bills, and it would represent an unwarranted headwind for the recovery,” she stated.

The Federal Reserve also announced it would keep its main policy rate near zero for now, but said it would begin scaling back its $120bn monthly bond-buying programme this month. The Federal Open Market Committee said it could start withdrawing stimulus because it had achieved ‘substantial further progress’ towards its twin goals of maximum employment and inflation that averages 2%. Fed chair Jerome Powell added that the bar for raising interest rates was higher than that for tapering. “It is time to taper, we think, because the economy has achieved substantial further progress toward our goals,” Powell was quoted by the FT as saying. “We don’t think it’s time yet to raise interest rates. There is still ground to cover to reach maximum employment, both in terms of employment and in terms of participation.”

The policy meeting came a couple of days before the latest US nonfarm payrolls report showed the jobs market bounced back in October. Nonfarm payrolls increased by 531,000 from the previous month, according to the Labor Department, compared with the Dow Jones estimate
of 450,000. 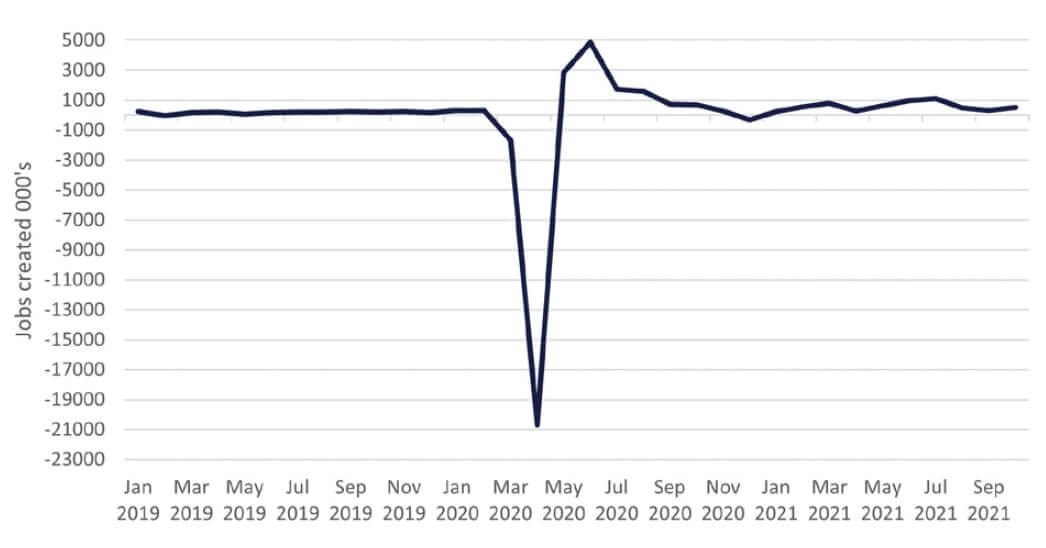 Private payrolls showed even stronger growth, rising by 604,000. This was far higher than 312,000 gain seen in September – a figure that was revised up from the Labor Department’s previous estimate of 194,000. Leisure
and hospitality drove gains as the number of Covid-19 infections declined. Meanwhile, the unemployment rate fell to 4.6%, marking a new pandemic low. Elsewhere, figures showed US factory orders unexpectedly rose in September by 0.2% from the previous month. Economists polled by Reuters had forecast orders to remain unchanged. On a year-on-year basis, orders were up by 17.6%. However, manufacturing is still constrained by shortages of labour and materials, with manufacturing activity slowing in October, according to the latest survey from the Institute for Supply Management.

What is Risk Tolerance and Why It’s Important