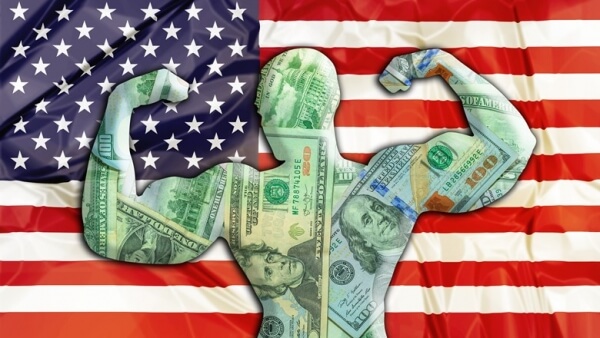 A STRONG US ECONOMY STEAMS AHEAD
The latest release of GDP statistics in the US confirmed that the world’s largest economy was able to sustain a pace broadly matching its trend-growth in 3Q19, as the annualised rate of real GDP growth hit 2.1%. The print proves bearish investors wrong, whose long-standing view had envisioned the US slipping into a recession in 2019-2020 (implied by the shape of the Treasury curve months ago, incorrectly so far). It was no surprise that household spending was one of the key drivers of economic activity. However, the fact that business investment activity was stronger than estimated by most (although there is still room for improvement) shows that the US’ economy is more resilient to external headwinds (such as the trade tensions) than what the broad market implied a couple of months ago. It remains to be seen however what the actual GDP growth number will be the end of 2020 and will likely depend on how the US-China trade negotiations progress and if world trade volumes recover.

ASIA
HSCEI 10,364 -2.00%, Nikkei 23,529.50 +0.12%, 10yr JGB- 0.05% +0bps, USDJPY 109.680 +0.66%
Investor sentiment in most Asian stock markets was pessimistic, weighing on the MSCI Asia Pacific ex. Japan index, which declined 0.3%. Chinese “H” shares (-2% in USD) was among the underperformers. As opposed to the general investor sentiment in Asia, the Pakistani (+3.6% in USD) and Indian (+1.2% in USD) stock indices gained.
Annual real GDP growth in India was 4.5% in CY3Q19, matching Bloomberg consensus. In CY3Q19, industrial production decreased 0.4% YoY, whilst the performance of the rest of the economy did not cause any surprise, as agricultural activity grew at a healthy 2.1% YoY, construction output increased by 3.3% YoY, whilst services activity growth remained strong, at 6.9% YoY, matching the pace seen in the previous quarter.
In China, industrial production was up 5.4% YoY in November, slower than the pace seen in the previous month, when industrial activity increased 9.8% YoY. The slowdown was predominantly due to the fact that Nghi Son oil refinery was shut down for planned maintenance. Although inflation accelerated to 3.5% YoY in November, the overall picture remained benign, since the pick-up in inflation was largely driven by food prices, especially pork prices, which was negatively impacted by the tightening supply brought about by the African swine flu. Core inflation – a gauge which filters out volatile prices – remained low and stable at 2.2% YoY in November.
The data confirms that economic activity could be very strong again in 4Q19 and as a result full-year real GDP growth could be as strong as 7% in 2019. Looking forward, real GDP could grow in the range between 6.5-7% in 2020, due to the inflow of FDIs and strong domestic dynamism.
The South Korean central bank held the policy rate stable at 1.25%, whilst revising down its GDP growth (2.3% in 2020) and inflation projection (1% in 2020). The Governor added that the central bank’s projections assume no worsening (and no improvement) in the US-China trade relations and concluded that the Monetary Policy Council keeps analysing the impact of the two (50bp in total) rate cuts delivered in 2019 on the real economy.

LATIN AMERICA
MSCI Lat Am 2,657 -2.04%
The vast majority of Latin American stock markets declined during the week. In this environment, the Chilean index underperformed its peers decreasing 4.6% in USD. In contrast, Peru’s stock market delivered a strong performance by increasing 0.8% in USD.
Unemployment rate in Brazil declined to 11.6% in October, from 11.8% in September. On a seasonally adjusted basis, the print meant a stable unemployment rate at 12.0%. Wage growth accelerated to 0.8% YoY in October.
Labour market metrics reflect the on-going recuperation in the Brazilian underlying economy. As the recovery continues, unemployment rate will further decline, whilst wage growth could keep accelerating – both underpinning the idea of a strengthening domestic economy.
The minutes from the central bank of Mexico’s last monetary policy meeting, when the Monetary Policy Council reduced the key rate by 25bp, showed that all members agreed on the idea to loosen financial conditions. However, there was a disagreement on the degree of accommodation, as two members (out of the total five) voted for a 50bp cut claiming that inflation outlook granted room for a greater-than-25bp cut.
Economic activity in Chile markedly slowed in October, when operations shut down due to civil unrest. Manufacturing activity contracted 5.8% YoY, whilst weakness in mining output persisted (-1.7% YoY). As a result, overall industrial production decreased 3.4% YoY in October.
Argentine President-elect Fernandez talked about the public debt during his speech to the Argentine Industrial Union. According to Mr Fernandez, he did not want to haircut the debt, and the rest of the world was not responsible for the excessive amount of debt issued by a democratic government (i.e. the Macri administration). Mr Fernandez claimed that he would not allow that external debt to take its toll on the national industrial sector and employment. He added that Argentina was going to pay after a period of sustained economic growth, which helped generate enough income to repay its obligations.

AFRICA
MSCI Africa 746 -3.90%
Investor sentiment deteriorated in African stock markets during the week. The South African market delivered one of the weakest performances compared with its regional peers, as the country’s index declined 2.3% in USD.
Egypt’s parliament approved central bank governor Amer for a second four-year term. Amer’s reappointment came ‘in light of the good results achieved in order to monitor the performance of the banking system and ensure its safety,’ according to Parliament Speaker Abdelaal.
In his second term, Mr Amer will most likely build on the foundations he has laid in his first term when his job was to come to an agreement with the IMF and to manage the country in a period of economic crisis.
Kenya’s central bank cut its benchmark interest rate for the first time in 16 months. The Monetary Policy Committee lowered the rate to 8.5% from 9% to prop an economy ‘operating below its potential,’ claimed Governor Njoroge. The committee noted the ongoing tightening of fiscal policy and concluded there was ‘room for accommodative monetary policy to support economic activity.’
Nigeria’s central bank held its benchmark interest rate at 13.50% in a unanimous decision. The fact that inflation rose to 11.6% YoY in October barred the Monetary Policy Committee to opt for easing financial conditions in the domestic economy.
This week’s global market outlook is powered by Alquity www.alquity.com