Shares in Europe fell for a fourth consecutive week, with the STOXX 600 finishing down 1.9%. Germany’s Dax slumped 1.8%, while the UK’s FTSE 100 slipped 0.4%. Bond yields rose amid ongoing concerns about inflation and interest rate increases.

Over in the US, indices briefly moved into correction territory – falling by more than 10% from recent highs – as investors feared the Federal Reserve would raise short-term interest rates more quickly than expected. Late gains helped the S&P 500 and the Dow end the week up 0.8% and 1.3%, respectively.

Interest rate fears spilled over into Asia, where the Nikkei 225 slid 2.9% and the Shanghai Composite slumped 4.6%.

Most major indices ended January on a positive note as investors looked ahead to this week’s slew of US earnings reports, as well as interest rate decisions in the eurozone and UK. The S&P 500 added 1.9% on Monday (31 January), although January as a whole proved to be its worst month since March 2020.

The STOXX 600 rose 0.8% whereas the FTSE 100 was flat. Economists expect the Bank of England to increase interest rates to 0.5% on Thursday in a bid to halt rising inflation. Price pressures are also expected to dominate the agenda at the European Central Bank’s (ECB) meeting on Thursday. No immediate policy action is expected, but investors will be looking for any shift in the ECB’s inflation rhetoric.

The FTSE 100 was up 0.8% at the start of trading on Tuesday, ahead of the latest UK manufacturing and lending data.

Last week’s economic headlines focused on a press conference held by Federal Reserve chair Jerome Powell, in which he declined to rule out more than four interest rate hikes this year. When asked whether the Fed could raise
rates at every subsequent meeting in 2022, Powell said the central bank would be nimble and “guided by the data”. He also declined to rule out the idea of a 0.5% rate hike at some point this year.

In comments reported by the Financial Times, Powell noted that the economy was much stronger than in 2015 (when the Fed last embarked on a rate rising cycle), inflation was well above the 2% target, and the labour market was robust. “These differences are likely to have important implications for the appropriate pace of policy adjustment,” he said.

He added that the committee was “of a mind” to raise the federal funds rate at the March meeting – comments which have been taken as confirming that the first rate hike will indeed occur next month.

The Fed’s apparent pivot towards raising interest rates was supported by data from the Commerce Department showing US gross domestic product (GDP) surged in the fourth quarter of 2021. GDP grew by an estimated 6.9% when compared to the previous year, following 2.3% growth in the third quarter. Barring the 33.8% surge seen in the third quarter of 2020 as the economy opened from the initial pandemic lockdowns, this was the fastest rate of expansion since 2000. 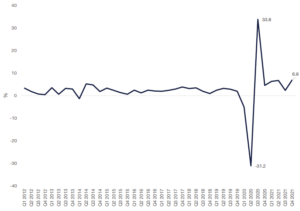 In 2021 as a whole, GDP grew by 5.7%, marking the strongest year since 1984 and lifting GDP to 3.1% above its pre-pandemic level. However, there are signs economic activity slowed in January as Covid-19 infections surged. IHS Markit’s flash US composite purchasing managers’ output index, which tracks the manufacturing and services sectors, fell sharply to 50.8 from 57.0 in December. This was the lowest since July 2020.

“Output has been affected by Omicron much more than demand, with robust growth of new business inflows hinting that growth will pick up again once restrictions are relaxed,” said Chris Williamson, chief business economist at IHS Markit.

Here in the UK, retail sales were viewed as poor for the time of year in January for the first time since September, according to a survey by the Confederation of British Industry (CBI). The survey was conducted between 22 December and 18 January, when the UK was operating under tightened Covid-19 restrictions.

Sales grew at an above average pace in the year to January, but this was compared with January 2021 when pandemic restrictions required non-essential retail stores to close. Despite this base effect, growth in orders placed with suppliers eased markedly.

“Even as cases fall and Omicron-related restrictions are rowed back, retailers will be looking to the year ahead with a degree of concern,” said Ben Jones, lead economist at the CBI. “The sector faces an inflation double whammy, as rising energy and transport costs erode households’ spending power and retailers’ own costs continue to mount.”