In Europe, the STOXX 600 lost 0.2% and the Dax slipped 0.7% as heavy fighting continued in Kyiv and Ukraine rejected a demand to surrender Mariupol. The

FTSE 100 gained 1.1% despite weak retail sales and a higher-than-expected increase in inflation.

Over in Asia, Japan’s Nikkei 225 surged 4.9% on news the government will introduce an additional package of measures to support the economy.

Investors eye next round of ceasefire talks

US and European stocks were mostly in the green on Monday (28 March) as investors eyed the next round of Russia-Ukraine peace talks in Turkey. The STOXX 600 added 0.1%, the S&P 500 gained 0.7% and the Nasdaq rose 1.3%. The FTSE 100 slipped 0.1% as Bank of England governor Andrew Bailey warned the shock to real incomes from rising energy prices could be worse than in the 1970s.

In China, the Shanghai Composite edged up 0.1% as data showed industrial profits rose by 5.0% year-on-year in the first two months of 2022. However, this was overshadowed by the start of a city-wide lockdown in the financial and manufacturing hub Shanghai – news that led to a slide in global oil prices.

UK and European stocks rose at the start of trading on Tuesday ahead of further peace talks and the latest US consumer confidence data.

UK inflation figures, released last Wednesday, showed prices rose at their fastest rate for 30 years in February as the cost of electricity, gas and other fuels soared. The consumer price index (CPI) increased by 6.2% in the 12 months to February, up from 5.5% in January. On a monthly basis, the CPI rose by 0.8%, the largest monthly increase between January and February since 2009, according to the Office for National Statistics (ONS).

On the same day, chancellor Rishi Sunak delivered his spring statement in which he warned the war in Ukraine was having a significant impact on the cost of living in the UK. Inflation is expected to reach a 40-year high of 8.7% in the fourth quarter. Sunak announced that fuel duty would be reduced by 5p a litre for the next 12 months, and raised the threshold at which earners start paying National Insurance by £3,000 from July. He also promised a one percentage point reduction in the basic rate of income tax from April 2024. However, the Office for Budget Responsibility warned in its economic and fiscal outlook that households were on course for the biggest fall in living standards in any single financial year since the ONS records began in 1956/57.

UK retail sales unexpectedly fell in February as online sales declined and stormy weather deterred some people from hitting the shops. ONS data showed the volume of sales dropped by 0.3% between January and February, a sharp fall from the 1.9% expansion seen the previous month. Economists in a Reuters poll had expected sales to grow by 0.6%. 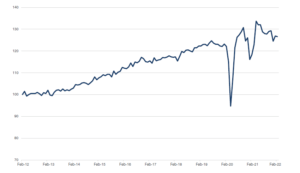 The figures have raised concerns that the cost-of-living crisis is causing people to tighten their belts. Indeed, separate data from GfK showed UK consumer confidence dropped to a 17-month low in March, falling by five points to -31. Joe Staton, client strategy director GfK, said “a wall of worry” is confronting consumers this month.

“Consumers across the UK are experiencing the impact of soaring living costs with 30-year-high levels of inflation, record-high fuel and food prices, a recent interest rate hike and the prospect of more increases to come, and higher taxation too – all against a background of stagnant pay rises that cannot compensate for the financial duress,” he said.

US jobless claims at lowest level since 1969

Over in the US, the number of people applying for unemployment benefits fell to the lowest level since 1969 in the week ending 19 March. Just 187,000 people filed for unemployment, down by around 28,000 from the previous week, according to the Labor Department’s figures. The four-week average for claims fell to 211,750 from 223,250.

The decline in claims has been partly attributed to the lifting of Covid-19 restrictions across the country. The figures have led to speculation the Federal Reserve will raise interest rates by half a percentage point at its policy meeting in May. Jerome Powell, chair of the central bank, recently described the current job market as “tight to an unhealthy level”.

In other US economic news, sales of new single-family homes unexpectedly fell in February as mortgage rates and house prices rose. Sales fell by 2.0% month-on-month to a seasonally adjusted annual rate of 772,000 units. On an annual basis, sales were down by 6.2% while the median new house price increased by 10.7% to $400,600, according to the Commerce Department.

German business confidence dropped sharply in March as Russia’s invasion of Ukraine and high energy prices dampened the outlook for Europe’s largest economy. The ifo Institute’s business climate index fell from 95.8 points in February to 90.8 points in March, a 14-month low. The drop was driven by a record collapse in expectations of 13.3 points, a larger drop than seen at the outbreak of the coronavirus crisis in March 2020. Businesses also assessed their current situation as worse, although the fall was comparatively moderate at 1.6 points. Clemens Fuest, president of the ifo Institute, said companies were expecting tough times and that “sentiment in the German economy has collapsed”.