In the US, the S&P 500, Dow and Nasdaq ended their holiday-shortened trading week around two percentage points lower, after scientists in South Africa said the Omicron variant seemed to be spreading more quickly than previous strains.

The pan-European STOXX 600 tumbled 4.5% as the spread of Omicron stoked fears of a fresh hit to the global economy. Travel stocks suffered the most as countries moved to suspend travel to southern Africa. The FTSE 100 and Germany’s Dax slid 2.5% and 5.6%, respectively. The sombre mood continued in Asia, where Japan’s Nikkei
225 and Hong Kong’s Hang Seng lost 3.3% and 3.9%, respectively.

Last week started on a fairly strong note, with encouraging economic data from both the US and Europe. In the US, the Commerce Department said gross domestic product (GDP) growth slowed to an annual rate of 2.1% in July to September, slightly better than its initial estimate of 2.0%. Weekly jobless claims dropped to 199,000, the lowest level since 1969.

In Europe, business activity growth unexpectedly accelerated in November after slipping to a six-month high the previous month, according to IHS Markit’s provisional flash PMI data. The index’s reading of 56.6 was the highest for three months, and was accompanied by a further marked increase in firms’ costs and average selling prices.

Chris Williamson, chief business economist at IHS Markit, said: “A stronger expansion of business activity in November defied economists’ expectations of a slowdown, but is unlikely to prevent the eurozone from suffering slower growth in the fourth quarter, especially as rising virus cases look set to cause renewed disruptions to the economy in December.”

Stocks suffer worst day since June 2020
The upbeat mood was quickly overshadowed by news of the Omicron variant. On Friday, the World Health Organization warned the new variant may spread more quickly than other forms and that preliminary evidence suggested there was an increased risk of reinfection.

Concerns about the virus and its impact on the global economy drove investors out of riskier assets on Friday, with European equities hit the hardest. The STOXX 600 recorded its worst session for 17 months, losing 3.7%. Europe had already seen an increase in the number of new coronavirus cases and hospitalisations, resulting in several countries reimposing restrictions the previous week.

The travel and leisure sector bore the brunt of the selloff, losing 8.8% in its worst day since March 2020, as England imposed a temporary ban on flights from southern Africa. Oil
and gas producers and miners also fell, as the new variant triggered concerns about a slump in demand.

Wall Street ‘fear gauge’ jumps
Over in the US, the S&P 500 saw its biggest one-day fall in nine months on Friday, while the CBOE Volatility Index, known as Wall Street’s ‘fear gauge’, surged to its highest level since early 2021. 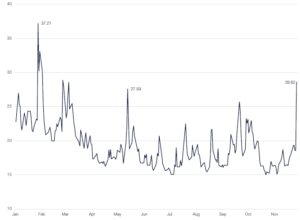 The yield on the benchmark US ten-year Treasury note fell by around 0.16 percentage points, marking its biggest decline since March 2020, as investors turned to traditionally lower risk assets. Elsewhere, the price of West Texas Intermediate crude oil plummeted by around 10% on concerns the Omicron variant will spark an economic slowdown.

Moderna boss casts doubt over vaccine efficacy
Indices managed to claw back some of last week’s losses on Monday (29 November), with the S&P 500 and the FTSE 100 finishing the trading session up 1.3% and 0.9%, respectively. However, markets fell sharply again on Tuesday after the chief executive of Moderna warned Omicron than earlier strains of the virus. Stéphane Bancel told the Financial Times that the high number of Omicron mutations on the spike protein, which the virus uses to infect human cells, and the rapid spread of the variant suggested existing vaccines may need to be modified next year.

Bancel’s comments rattled markets in Asia, with the Nikkei 225 finishing down 1.6% on Tuesday, and resulted in the price of oil dropping to its lowest level since mid-September. The FTSE 100 and the STOXX 600 opened their trading sessions around 1.5% lower, as investors feared further restrictions and lower demand in the weeks ahead.

What is Impact Investing, and Is it a Good Investment Strategy?