The S&P 500 ended its holiday-shortened trading week up 6.5%, lifting it out of bear market territory, amid signs the Federal Reserve’s monetary tightening was helping to moderate inflation. The Dow and the Nasdaq climbed 5.4% and 7.5%, respectively.

In China, the Shanghai Composite gained 1.0% after the country’s president Xi Jinping said it would adopt “more forceful measures to deliver the economic and social development goals for the whole year and minimise the impact of Covid-19”.

* Data from close on Friday 17 June to close of business on Friday 24 June.

UK and European indices started this week in the green as an easing of Covid-19 restrictions in China boosted investor sentiment. The FTSE 100 climbed 0.9% on Monday (27 June) with miners leading gains after G7 leaders pledged a $600bn boost to global infrastructure. In contrast, the Dow, S&P 500 and Nasdaq gave back some of last week’s gains, ending the trading session down 0.2%, 0.3% and 0.7%, respectively.

In economic news, US pending home sales unexpectedly rebounded in May after declining for six consecutive months. Sales rose by 0.7% from the previous month but were down 13.6% on a year-on-year basis.

The FTSE 100 was up 1.1% at the start of trading on Tuesday as hopes of an economic rebound drove commodity prices higher and boosted mining stocks.

The UK consumer price index, published last Wednesday, showed inflation hit a new 40-year high in May as food and energy prices soared. The Office for National Statistics (ONS) said prices rose by 9.1% in the 12 months to May, slightly higher than the 9.0% increase recorded in April. Prices for food and non-alcoholic drinks rose by 8.7% year-on-year, the biggest jump since March 2009.

Encouragingly, core inflation – which strips out food and energy prices – eased to 5.9% in May from 6.2% in April. On a monthly basis, consumer prices rose by 0.7% in May, much less than the 2.5% monthly increase seen in April.

The latest UK retail sales data suggests rising prices are resulting in consumers reining in their spending. Sales volumes fell by 0.5% between April and May, reversing the expansion seen in the previous month.

The decline was driven by a 1.6% fall in food store sales, which the ONS said seemed to be linked to the impact of rising food prices and the cost of living. 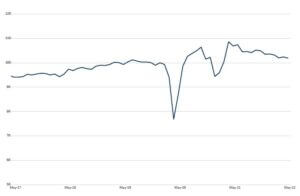 Separate figures showed UK consumer confidence fell to its lowest level since records began. GfK’s consumer confidence index slipped by one point to -41 in June, with a particularly large drop in expectations around personal finances. “With prices rising faster than wages, and the prospect of strikes and spiralling inflation causing a summer of discontent, many will be surprised that the index has not dropped further,” said Joe Staton, client strategy director at GfK.

Last week’s economic data also showed a slowdown in business growth in the eurozone. The S&P Global flash eurozone PMI composite output index fell from 54.8 in May to 51.9 in June, a 16-month low. Manufacturing output contracted for the first time in two years and service sector growth cooled considerably, particularly among consumer-facing services.

Companies also scaled back their business expectations for output over the coming year to the lowest since October 2020. Both the stagnation of demand and worsening outlook were widely blamed on the rising cost of living, tighter financial conditions and concerns over energy and supply chains.

Chris Williamson, chief business economist at S&P Global Market Intelligence, said: “Eurozone economic growth is showing signs of faltering as the tailwind of pent-up demand from the pandemic is already fading, having been offset by the cost-of-living shock and slumping business and consumer confidence. Excluding pandemic lockdown months, June’s slowdown was the most abrupt recorded by the survey since the height of the global financial crisis in November 2008.”

Signs US inflation is moderating

Over in the US, data suggested inflation could be moderating. The University of Michigan’s consumer sentiment survey showed consumers expect inflation to rise at an annualised rate of 5.3% in June, below forecasts and the peak rate of 5.4% recorded in March and April. Meanwhile, S&P Global’s flash PMI data for June showed the pace of input price inflation eased to the lowest for five months, and output charges rose at the softest pace since March 2021.

However, the data also revealed the weakest upturn in US private sector output since January’s Omicron-induced slowdown. The rise in activity was the second softest since July 2020, with slower service sector output growth accompanied by the first contraction in manufacturing production in two years. Meanwhile, business confidence slumped to the lowest since September 2020. “Business confidence is now at a level which would typically herald an economic downturn, adding to the risk of recession,” said Williamson.