Stock markets suffered another bout of steep losses last week as a series of interest rate hikes intensified fears of a global recession.

US indices recorded a second week of losses after the Federal Reserve indicated that short-term interest rates are likely to continue increasing sharply over the next few months. The S&P 500 fell 4.7%, the Dow lost 4.0% and the Nasdaq tumbled 5.1%.

Fears of a slowdown in global economic growth weighed on stock markets in Asia, with the Nikkei and Shanghai Composite losing 1.5% and 1.2%, respectively.

*Data from close on Friday 16 September to close of business on Friday 23 September.

The pound hit a record low of $1.033 early on Monday (26 September) as investors reacted to Kwarteng’s ‘growth plan’ for the UK economy. The so-called mini-budget included a much bigger package of tax cuts than had been expected and raised concerns about a surge in government borrowing.

Several lenders pulled mortgage deals from the market amid speculation the BoE will be forced to hike interest rates at a more aggressive pace. The Bank’s governor Andrew Bailey ruled out an emergency rate hike this week, but said it would “not hesitate to change interest rates by as much as needed”. The Treasury announced that a fiscal plan would be published on 23 November, setting out details of the government’s fiscal rules “including ensuring that debt falls as a share of [gross domestic product] in the medium term”.

In the US, the Dow slid into bear market territory on Monday, down more than 20% from its recent peak, and continued to decline on Tuesday as fears of a recession grew. The FTSE 100 slipped 0.5% on Tuesday, with housebuilders hit especially hard by interest rate concerns. The blue-chip index was 1.4% lower at the start of trading on Wednesday after the International Monetary Fund criticised the UK’s tax-cutting plans. The BoE has now said it will start a temporary programme of bond purchases from 28 September to stabilise the market.

The mini-budget came the day after the Bank of England lifted interest rates by 0.5 percentage points for the second month running. The base rate now stands at 2.25%, its highest level since 2008.

Bank of England base interest rate 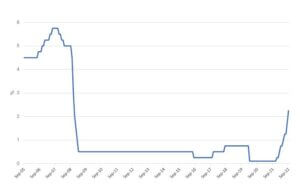 The BoE’s monetary policy committee (MPC) noted that while annual inflation fell slightly from 10.1% in July to 9.9% in August, it is still expected to near 11% when energy bills rise in October and remain above 10% over the following few months.

“The labour market is tight and domestic cost and price pressures remain elevated. While the [energy price] guarantee reduces inflation in the near term, it also means that household spending is likely to be less weak than projected in the August report over the first two years of the forecast period. All else equal, and relative to that forecast, this would add to inflationary pressures in the medium term,” the committee said.

The MPC forecast a 0.1% decline in UK gross domestic product (GDP) in the third quarter, as opposed to its previous forecast of 0.4% growth. GDP already declined by 0.1% in the second quarter and another drop in Q3 would mean the UK is in a technical recession.

Over in the US, the Federal Reserve announced its third-consecutive 0.75 percentage point interest rate hike in its quest to tame inflation. The federal funds rate is now in the 3.0-3.25% range, the highest since early 2008.

Fed chairman Jerome Powell said the central bank was “strongly resolved” to bring inflation down to 2% and “will keep at it until the job is done”. In comments reported by CNBC, Powell admitted that interest rate hikes could spark a recession. “No-one knows whether this process will lead to a recession or, if so, how significant that recession will be,” he said.

Fed officials expect US GDP growth to slow to 0.2% for 2022, down sharply from June’s expectation for 1.7% growth.

The eurozone’s economic downturn deepened in September, according to S&P Global’s flash purchasing managers’ index (PMI). The composite output index fell from 48.9 in August to 48.2 in September, and has now registered below the neutral 50.0 level for three successive months.

Manufacturing led the downturn, with factory output falling for a fourth straight month. Service sector output also fell, down for a second consecutive month. The service sector decline was the sharpest since 2013 excluding the falls seen as a result of pandemic containment measures.

Chris Williamson, chief business economist at S&P Global Market Intelligence, warned that a eurozone recession was on the cards. “The early PMI readings indicate an economic contraction of 0.1% in the third quarter, with the rate of decline having accelerated through the three months to September to signal the worst economic performance since 2013, excluding pandemic lockdown months,” he said.

Regulation for FinTech Firms is Intensifying