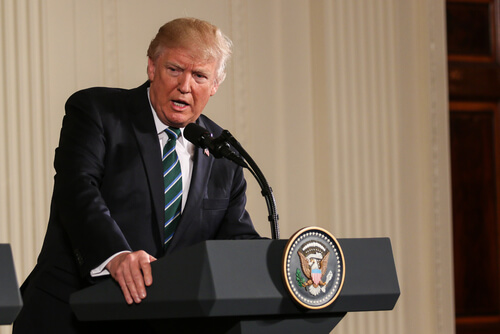 PLAYING THE TRUMP CARD
On the face of it, last week’s equity market sell-off, the worst in 2 years for the US, was all about the threat of Donald Trump starting a trade war. The reality is a little more nuanced:

The danger of US led geopolitical upheaval should not be ignored, and it appears that we are in a new more volatile regime, given marginal headwinds are building, but global growth is expected to continue. Greater uncertainty is particularly the case in the US, which appears to be as a later cycle than its global peers.
Bucking the risk-off trend last week, were oil markets. Crude prices hit seven-week highs, following the biggest weekly gain in 8 months, after increased tension in the Middle East and speculation OPEC could extend output limits.

UNITED STATES
S&P 2,588 -5.95%, 10yr Treasury 2.85% -3.10bps, HY Credit Index 343 +14bps, Vix 22.52 +9.07Vol
The S&P 500 experienced its worst week in over 2 years after big falls on Thursday and Friday. Technology stocks fared even worse as Facebook fell almost 15% after data breaches were discovered. This means most indices are now down on the year. Bond yields finished modestly lower.
In terms of Trump’s China protectionism, on Thursday the administration announced its intention to impose USD 60bn of tariffs alongside restrictions on technology transfers and acquisitions of U.S. firms by Chinese competitors. The Chinese Commerce Ministry branded the plans a “vile precedent” and declared they would target USD 3bn of imported US goods with their own levies. There is now a 30-day window during which politicians in Washington can lobby the U.S. Trade Representative’s office. This may lead to a watering down of proposals.
Away from replacing core members of his staff and antagonising the world’s biggest economy, Trump also raised pulses on Friday by threatening (by tweet) to veto the USD 1.3tn spending bill, which will fund government for the next 6 months. This would have prompted another government shutdown.
Passing virtually unnoticed, Jerome Powell’s first meeting as FED Chair delivered the 6th rate hike of this cycle, with the Fed Funds Target Rate now set between 1.5%-1.75%. The accompanying press conference and projections highlighted an improved economic outlook, with unemployment expected to drop to 3.6% by 2019. Although the committee made upward adjustments to its projected interest rate path, the 2018 forecast remained for 3 hikes during the calendar year. As such, the meeting could be characterized as neutral and in line with market expectations.

EUROPE
Eurostoxx 3,314 -3.48%, German Bund 0.54% -4.40bps, Xover Credit Index 290 -39bps, USDEUR .806 -0.52%
European equities sold off and bonds rallied with the broader “risk-off” sentiment, whilst both the EUR and the GBP strengthened against the USD. Economic (soft) data was unambiguously weaker; the March PMI, German IFO and French business climate all pointing towards a moderation in activity.
In the UK, the BOE monetary policy committee voted 7-2 to leave rates on hold as expected. However, the bank confirmed its intention to raise rates in May commenting that “given the prospect of excess demand over the forecast period, an ongoing tightening of monetary policy over the forecast period will be appropriate to return inflation sustainably to its target at a more conventional horizon.”  Elsewhere, a technical agreement was reached between the EU and the UK regarding a 21-month transition period for Brexit. This will start in March 2019 and was hailed as a “new dynamic” by PM Theresa May.

ASIA
HSCEI 12,198 -4.34%, Nikkei 20,766.10 -3.92%, 10yr JGB 0.02% 0bps, USDJPY 105.130 -1.21%
Chinese equities underperformed last week, on account of rate hike announcements and hostile trade rhetoric coming out of the US.
The People’s Bank of China raised the seven-day repo rate by five basis points to 2.55%. The SLF and MLF rates were left unchanged. There were a number of factors driving the decision.
Chinese equities sold off on Friday after the latest protectionist announcements from the Trump administration. H shares finished the week down -2.4%, while mainland A shares fared better, down -1.0%.
While announcing punitive trade measures under the Section 301 investigation, Trump appeared to leave the door open for a deal to be made to avoid an all-out trade war.
China’s early responses to the US have been steadfast. Vice Premier Liu He reportedly warned US Treasury Secretary Steve Mnuchin of China’s preparedness to fight back with its own trade restrictions during a phone call with the White House over the weekend. This follows an announcement from Beijing on Friday of plans to impose controls on 128 American imports.
Moody’s released comments, warning Pakistan of the risk of a sovereign downgrade. A widening fiscal deficit, persistent external imbalances and political instability were highlighted as the main calls for concern. The agency declined, however, to adjust its current B3 rating on Pakistan, and left the outlook unchanged at stable.
The Philippines central bank remained dovish at its most recent meeting, leaving rates on hold at 3.0% while playing down inflationary risks, emphasising their view that the recent increase in CPI is transitory and driven largely by tax reform.
Sri Lanka’s economic growth rate fell to a 16-year low in 2017 of 3.3% YOY, down from 4.4% in 2016.  According to the Department of Census and Statistics, the agricultural sector underperformed due to unfavourable weather conditions while services, which account for 55% of GDP, also dragged on headline growth.

LATIN AMERICA
MSCI Lat Am 3,001 -1.16%
Brazil cut the SELIC rate once again, by 25bps to 6.5%, the lowest in history. In the context of low inflation and anchored expectations, consistent recovery of economic activity, which is becoming increasingly widespread, the central bank signalled the possibility of another rate cut at the next meeting. It acknowledged that its monetary policy turned dovish from neutral (making clear that the neutral real interest rate for Brazil is currently at 3.5-4% and can decline further with more structural reforms).
Argentina’s numbers came in mixed:

Argentina will target a primary fiscal deficit of 3.2% of GDP in 2018 (from 3.9% in 2017 and 4.3% excluding extraordinary revenue from the repatriation). The current account deficit for 4Q17 came in at USD 8.7bn (compared to USD 4.2bn in 4Q16) and 4.8% of GDP for 2017 as a whole, its worst level in 20 years.
Chile’s GDP expanded by 3.3% YOY during 4Q17, its biggest expansion in more than 4 years. The current account deficit closed 2017 at USD 4.1bn (1.5% of GDP).
PPK resigned Peru’s presidency and announced an orderly transition. The move came after Fuerza Popular (opposition party with a majority in Congress) leaked a video showing how Kenji Fujimori’s congressmen (brother of Fuerza Popular’s leader Keiko Fujimori and son of former president Alberto Fujimori) and lesser government officials promised public works (and bribes) in lieu of votes for PPK to remain in power in the vacancy vote that was scheduled for last week. Vice President Martin Vizcarra will become successor and will take over in next few days and finish out the mandate through 2021.
Markets were left undeterred: PEN strengthened 0,46% and the local index +0.88% on the news, while Fitch ratified Peru’s sovereign rating at BBB+ stable outlook. Peruvian gross sovereign debt reached 23.9% of GDP in 2017 and with FX reserves of USD 62bn; the country is in a very comfortable position.

AFRICA
MSCI Africa 1,013 -1.20%
Moody’s affirmed South Africa’s investment-grade credit rating and revised its credit outlook to stable, citing a reversal in the erosion of strength of South Africa’s institutions and a new resolve to put the economy on a new and positive path.
A downgrade to non-investment grade by Moody’s would have seen South Africa removed from Citi’s World Government Bond Index and could have triggered up to USD 9bn in asset sales by foreign investors. The decision is a vote of confidence for the steps taken by the new Ramaphosa administration.
South Africa’s headline consumer inflation slowed to 4.0% YOY in February from 4.4% in January. On a MOM basis, inflation rose to 0.8% in February from 0.4% in January. Core inflation was unchanged at 4.1% YOY in February.
The positive data prints and developments over the last couple of months include:

Collectively, this makes it highly likely that monetary policy will become accommodative from the committee’s next sitting on 28th March.
Kenya surprisingly cut rates to boost growth. Kenya’s central bank cut its base interest rate 50bps to 9.5% to boost economic growth, after a combination of drought, prolonged elections, high and rising government debt, and slow private sector growth saw growth fall 100bps to 4.8% in 2017.
The rates cut is most likely a signal for the removal/modification of the cap on commercial lending rates (set at 4% above base rate) which has choked out private sector lending to 2.1% YOY in February, compared to the central bank’s target rate of 12-15%.
Morocco’s central bank kept its benchmark interest rate unchanged at 2.25%.
Nigeria’s senate approved the appointment of two deputy central bank governors and three members of the Monetary Policy Committee. This gives the rate setting committee sufficient numbers to meet for the first time this year. The next MPC meeting is scheduled for April 3-4.