Most major stock markets rose last week as second quarter earnings season kicked off in the US and economic data showed signs of easing inflationary pressures.

The S&P 500 rose 2.6% as corporate earnings reports proved to be better than expected. Netflix, for example, lost around 970,000 subscribers during the second quarter – a much smaller loss than the two million it had previously projected. The Dow added 2.0% and the Nasdaq gained 3.3%.

Investor sentiment was also strong in Europe, despite the European Central Bank’s (ECB) decision to raise interest rates for the first time in over a decade. The STOXX 600 rose 2.9% and Germany’s Dax surged 3.0% as Russia restarted Nord Stream gas flows to Europe, albeit at levels well below the pipeline’s capacity. The UK’s FTSE 100 added 1.6%, despite inflation rising to a new 40-year high.

*Data from close on Friday 15 July to close of business on Friday 22 July.

Stock markets were mixed on Monday (25 July) as investors looked ahead to the Federal Reserve’s two-day policy meeting and a busy week of corporate earnings reports. The S&P 500 ended the day flat, the FTSE 100 gained 0.4% and the STOXX 600 edged up 0.1% ahead of an expected 75 basis point rate hike by the US central bank. The Dax slipped 0.3% on news Gazprom had cut its natural gas supplies to Germany through the Nord Stream 1 pipeline by half.

In economic news, a survey by the Ifo Institute found business sentiment in Germany deteriorated significantly in July because of surging energy prices and concerns about gas supply. Ifo president Clemens Fuest warned that Germany “is on the cusp of a recession”.

Last week saw the release of the UK consumer prices index (CPI), which showed inflation hit a fresh 40-year high of 9.4% in the 12 months to June, after rising by 9.1% in May. This was higher than economists’ expectations of 9.3%. On a monthly basis, prices rose by 0.8% compared with a 0.5% increase in the same month a year earlier. 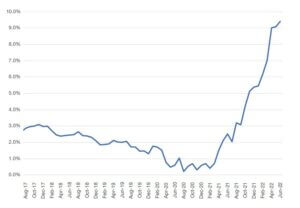 The main driver was a 42.3% annual increase in the price of motor fuels, the highest rate since before the series began in 1989. Prices for food and non-alcoholic drinks also soared by 9.8%, the steepest rise since March 2009, according to the Office for National Statistics (ONS).

More encouragingly, core CPI, which strips out volatile energy and food prices, edged down from 5.9% in May to 5.8% in June, in line with expectations.

The latest ONS retail sales data suggests rising prices are causing consumers to tighten their purse strings. Sales volumes fell by 0.1% in June following a downwardly revised drop of 0.8% in May. The only sector to see an increase was food, which rose by 3.1% as a result of the Queen’s Jubilee celebrations. Sales of fuel, clothing and household goods all fell sharply.

A separate report by the ONS found 50% of adults in the UK bought less food in the first half of July than usual, up from 18% in October 2021. Meanwhile, GfK’s survey revealed UK consumer confidence remained at -41 in July, the lowest since records began in 1974.

Over in Europe, the ECB raised interest rates for the first time in 11 years in an effort to rein in inflation. The central bank lifted the base rate by 0.5 percentage points to 0.0%, higher than the 0.25 percentage point hike forecast by economists.

ECB president Christine Lagarde said inflation is expected “to remain undesirably high for some time owing to continued pressure from energy and food prices and pipeline pressures in the pricing chain”.

The announcement came as the eurozone economy showed signs of slowing. The S&P Global manufacturing purchasing managers’ index (PMI) fell to 49.6 in June, down from 52.1 in May and below the 50-point mark that separates growth from contraction. The services PMI declined to 50.6 from 53.0, while business expectations for the year ahead fell to the lowest since May 2020.

US jobless claims higher than expected

In the US, weekly jobless claims rose to their highest level since mid-November, suggesting the historically tight labour market is beginning to slow. Initial claims totalled 251,000 for the week ending 16 July, up 7,000 from the week before.

Meanwhile, US private sector output contracted for the first time in over two years, according to the latest flash PMI data from S&P Global. The downturn was led by a steep decline in service sector activity, although production at manufacturers also fell marginally.

Chris Williamson, chief business economist at S&P Global Market Intelligence said: “Excluding pandemic lockdown months, output is falling at a rate not seen since 2009 amid the global financial crisis, with the survey data indicative of [gross domestic product] falling at an annualised rate of approximately 1%.”