Stocks in Europe and the US recorded strong gains last week as Liz Truss resigned as UK prime minister and many of her fiscal policies were scrapped.

The FTSE 100 gained 1.6%, Germany’s Dax added 2.4% and the pan-European STOXX 600 advanced 1.3% as Truss resigned after only 45 days in office. The announcement came after new UK chancellor Jeremy Hunt reversed almost all the tax-cutting measures contained in last month’s mini-budget.

In the US, the S&P 500 enjoyed its best weekly gain in nearly four months, rising 4.7%. Strong third quarter earnings results and a suggestion that the Federal Reserve might moderate its pace of interest rate hikes helped to boost investor sentiment.

In Japan, the Nikkei declined 0.7% as the yen hit a 32-year low against the US dollar and Japanese core annual inflation accelerated to 3.0% in September. China’s Shanghai Composite fell 1.1% after the country’s statistics bureau said it was delaying the release of third quarter gross domestic product (GDP) data, leading to speculation that China is on track to miss its official growth target of 5.5% this year.

* Data from close on Friday 14 October to close of business on Friday 21 October.

Stocks rose on Monday (24 October) as Rishi Sunak was named the UK’s next prime minister. The announcement came shortly before the Conservative Party leadership nominations deadline, with Sunak’s rival Penny Mordaunt pulling out of the race and backing him in the final minutes. The FTSE 100 ended the trading session up 0.6%, while Germany’s Dax gained 1.6%. In the US, the S&P 500 added 1.2% ahead of a big week for third quarter earnings, including Microsoft, Alphabet, Meta Platforms, Apple and Amazon.

Inflation in the UK rose above 10% for the second time this year in September, according to figures from the Office for National Statistics (ONS). The headline consumer prices index (CPI) measured 10.1%, matching July’s 40-year high after dipping slightly to 9.9% in August. 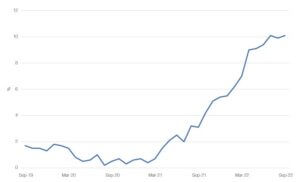 Food and non-alcoholic drinks were the biggest contributor to the increase, with prices soaring by 14.6%, a 42-year high. Of this, the largest upward effects came from bread and cereals, meat products, and milk, cheese and eggs. This more than offset price declines at petrol pumps. Motor fuels inflation eased to an annual rate of 10.9%, down from a peak of 15.2% in June.

Core inflation, which excludes energy, food, alcohol and tobacco, rose to 6.5% in September from 6.3% in August, adding to expectations of a large interest rate rise on 3 November.

The latest retail sales data suggests high inflation is resulting in UK shoppers reining in their spending. Retail sales volumes fell by 1.4% in September from the previous month, according to the ONS. This was much worse than the 0.5% fall forecast by economists in a Reuters poll. Retail sales in September were below pre-pandemic levels for the first time since February 2021. However, the ONS emphasised that data had been affected by the bank holiday for the funeral of HM Queen Elizabeth II. In the three months to September, sales volumes were down by 2.0% when compared with the previous three months, although the amount spent was up 0.5%, reflecting higher prices.

“But the biggest danger by far is inflation, now rising at its fastest rate for 40 years,” said Staton. “Households are not just running scared of burgeoning energy and food prices, and the prospect of further base rate rises increasing mortgage costs. They are now facing the likelihood of tax rises and even austerity measures.”

US homebuilder sentiment at a decade low

Over in the US, an index of homebuilder sentiment hit a ten-year low in October as rising mortgage rates and supply chain bottlenecks for building materials made new housing less affordable. The National Association of Home Builders / Wells Fargo Housing Market index dropped eight points to 38. That marked the lowest reading since August 2012, excluding a short-lived drop in spring 2020 when the US went into lockdown.

Meanwhile, mortgage applications fell by 4.5% in the week ending 14 October from a week earlier, and housing starts dropped 8.1% in September to a seasonally adjusted annual rate of 1.439 million units. The average 30-year fixed mortgage rate has hit 6.94%, the highest since 2002, according to the Mortgage Bankers Association.

The Effect of Worldwide Inflation on Your Investments