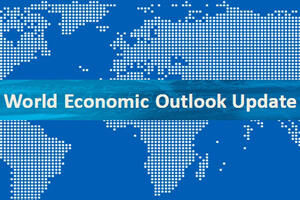 NO FREE LUNCH
Last week, the IMF released its updated “World Economic Outlook”. Just as in January, the fund believes global growth will continue at a cyclical peak of 3.9% until 2020 (an acceleration from 3.8% last year). However, the forecast came with a caution that “momentum is not assured”, particularly in light of “waning support for global integration”, and “despite the good near-term news, longer-term prospects are more sobering.” The cycle is not yet over but the structural issues facing developed countries are starting to rear their heads again, whilst those countries that overly rely on natural resources also face a pressing need to diversify.
With respect to the commodity space, the WTI oil price came close to USD 70 per barrel (69.56) before falling back later in the week. This prompted President Trump to tweet, “Looks like OPEC is at it again. With record amounts of Oil all over the place, including the fully loaded ships at sea, Oil prices are artificially Very High! No good and will not be accepted!” Following sanctions on Russia, metal prices have also surged over the last 2 weeks, aluminium because Rusal has been banned from selling in a number of countries and palladium and nickel because of worries Norilsk Nickel could be targeted next.

UNITED STATES
S&P 2,670 +0.52%, 10yr Treasury 2.98% +13.35bps, HY Credit Index 340 +1bps, Vix 16.88 -0.53Vol
After a strong start to the week, as Russia chose not to retaliate to coalition strikes in Syria, stocks trimmed gains on Thursday and Friday with the S&P 500 finishing roughly flat on the year (-0.13%). Meanwhile in fixed income, the US yield curve traded at its flattest levels since 2007 (2-10s trading at 41bps) before a selloff brought the 2-year bond to its highest yield since the crisis (2.46%) and the 10-year bond to its highest yield since 2014 (2.96%). From a rate rise perspective, this translates to no chance of a hike priced in by futures for May, but near 100% probability of a 25bps increase in June and a 50% probability of 4 hikes for the whole of 2018.
At the corporate level, earnings season started in earnest with 69 companies in the S&P 500 now having reported. Thus far, 80% have beaten consensus estimates with earnings growth of 18.2% YOY. An exception to the positive tone was Philip Morris, the tobacco company, whose shares dropped around 17% on the week after declining cigarette sales and stalling growth in the e-cigarette market in which it has invested heavily.
Ahead of the “blackout period” before the May FED meeting, during which governors are unable to speak publicly, a number of FED members spoke cautiously including:

From a data perspective, retail sales came in better than expected (led by autos) alongside better housing starts.
At the geopolitical level, it was confirmed that CIA director Mike Pompeo met with North Korean leader Kim Jong Un in Pyongyang over Easter in order to prepare a summit between North Korea and Donald Trump later in Q2. South Korea will also meet with its neighbour, which may lead to a peace treaty that would replace the current armistice.
Given the about turn in North Korea’s messaging (from threats of war to suggestions of denuclearisation in only a few months) the optimism around upcoming meetings is cautious.
The Bank of Canada left rates unchanged at 1.25% as it weighs unemployment at its lowest level since the 1970s and inflation at its 2% target, against weaker than expected growth in Q1 and risks to trade, investment and housing.

EUROPE
Eurostoxx 3,494 +0.97%, German Bund 0.63% +7.90bps, Xover Credit Index 275 -1bps, USDEUR .814 +0.35%
European equities and bonds followed their US peers higher and lower respectively. Final inflation data came in lower (1.3% for March), with price pressures still lacking across the currency zone. This week will be interesting as the PMI and German Ifo surveys will help to measure to what extent the Q1 slowdown has persisted through April. There is also an ECB meeting at which Mario Draghi may choose to moderate his bullishness given recent geo-political wrangling.
In the UK, retail sales for March fell sharply (-1.2% MOM) after the cold weather affected most sectors of the economy. In addition, CPI inflation slowed (2.5% YOY in March vs. 2.7% YOY in February). Whilst this set the tone for a decline in GBP, it was comments by Bank of England Governor Mark Carney in an interview with the BBC that pushed the currency to its worst weak in several months. Not for the first time, Carney changed his tone stating recent data “have been a bit softer” and “we’ll sit down calmly and look at it all in the round…I am sure there will be some differences of view but it is a view we will take in early May, conscious that there are other meetings over the course of this year.” As a consequence, the probability of an interest rate hike at the next meeting fell from over 90% to around 50%.
The Bank of Israel left rates on hold at 0.10% as expected.

ASIA
HSCEI 12,035 -1.62%, Nikkei 22,088.04 + 1.66%, 10yr JGB 0.06% +0bps, USDJPY 107.870 +0.30%
China’s economic growth rate surprised on the upside in Q1 at 6.8% YOY, unchanged from Q4 2017 and ahead of the 6.5% full year target. Real estate and consumption remained key areas of strength for the economy. Conversely, according to the March data release, industrial production growth weakened at the end of the quarter to 6.0%, down from 6.2% in February. Year to date fixed asset Investment growth also tapered off, falling from 7.9% to 7.5%.
On the policy front, the People’s Bank of China cut the reserve requirement ratio for the banking sector from 17% to 16%, representing a marginal loosening of monetary conditions. Commercial banks must now hold reserves with the central bank equal to 16% of total deposits outstanding, a lower percentage that now frees up greater funds for lending.
In India, wholesale price inflation was flat in March at 2.5% YOY slightly ahead of expectations. The monthly trade balance also swung from a deficit last month (-$53m) to surplus (+$1.1bn) on account of stronger exports.
Bank of Indonesia left rates unchanged at 4.25%, in line with expectations. The central bank laid out a rigidly neutral outlook, describing how inappropriate a rate cut would be in the current environment, while warning that a rate hike would damage growth in an economy already expanding below potential.
Inflation in Malaysia fell from 1.4% YOY in February to 1.3% in March, coming in below expectations on account of lower food prices.

LATIN AMERICA
MSCI Lat Am 3,031 +0.14%
Populist candidate Andrés Manuel López Obrador is widening his advance in Mexico’s presidential election polls. The MXN gave back some of its YTD gains, last week, after several polls confirmed that AMLO now gathers more than the sum of his 2 closest rivals Anaya (PAN) and Meade (PRI). AMLO’s rejection rate keeps on falling to 23% in April 2018, from 33% in October 2017.
Analysts are revising downward their expectations for Brazil’s economy in 2018 with GDP expectations falling from 2.9% a few weeks ago to 2.76% now and the BRL depreciating from 3.14 (vs. USD) at the end of January to 3.41 currently.
Coming into 2018, many were optimistic based on:

However, construction remains lethargic and so far job creation is mostly made up of informal and self-employed workers, who are less likely to spend. Consequently, consumer credit is not yet expanding.
Argentina’s primary fiscal deficit continued to shrink in March to 3.4% of GDP (from 3.6% a year ago). However, the nominal deficit remains high at 5.8% of GDP. Tax revenues (excluding extraordinary revenues linked to the tax amnesty in 2017) increased 2.2% in real terms in Q1 (28.2% YOY nominally), in line with the strong performance of the economy. During the same period, primary expenditures fell by 5.5% YOY in real terms (18.5% YoY nominally) as cuts in energy subsidies (-20.3%) and capital expenditures (-23.1%) were partially offset by higher pension payments (30.5%), and an increase in wages (18.7%).
Colombia’s leading indicators points to a healthy recovery:

2017 was a tough year for the Colombian economy, which adjusted to a 3pp VAT increase. The recovery underway in 2018 benefits from a statistical effect, however the economy is likely to still grow below its potential.
One can remain optimistic as uncertainty fades around the presidential election, decreasing interest rates and consumer confidence reaching its highest level since Q3 2016 should translate into higher growth over the coming years.
These factors have translated into the COP advancing 10.2% YTD, the best currency performance globally. More broadly, it can be explained by:

AFRICA
MSCI Africa 986 +2.03%
South African consumer price inflation slowed to its lowest rate in seven years. Headline annual consumer inflation slowed to 3.8% in March from 4.0% in February, the lowest figure since January 2011. MOM, inflation slowed to 0.4% from 0.8%, while food price inflation, a major concern for the Reserve Bank in the last two years due to drought, slowed to 3.5% YOY from a recent high of 11.8% in December 2016.
South Africa’s retail sales rose 4.9% YOY in February compared to 3.0% consensus estimate. Seasonally adjusted retail trade sales increased 1.8% MOM in February. This followed MOM changes of -1.4% in January 2018 and -3.3% in December 2017.
The IMF, in its April World Economic Outlook for 2018, highlighted the improving outlook for the South African economy. In its report, the IMF raised its growth forecast for South Africa from 0.9% in 2018 and 2019, to 1.5% and 1.7%, respectively. This follows similar upward revisions by the World Bank and S&P in recent weeks.
The medium-term outlook is still subdued, weighed down by structural bottlenecks. However, the Ramaphosa administration is committed to reforming the economy and unlocking the 3+ percent GDP growth required to reduce the country’s high unemployment.
Morocco’s annual consumer price inflation rose to 2.5% in March, up from 1.8% in February, driven by higher food prices. Annual food inflation rose to 3.3% from 1.7% in the 12 months through March. Non-food price inflation slowed marginally to 1.4% from 1.5% YOY. MOM, CPI rose to 0.1% in March compared to 0.5% in February.
This week’s global market outlook is powered by Alquity www.alquity.com