In the US, the S&P 500 recorded its biggest fall in more than 14 months, ending the holiday-shortened trading week down 5.7%. The Nasdaq suffered its steepest weekly drop since the start of the pandemic, tumbling 7.6% as technology stocks bore the brunt of rate hike fears.

European indices declined amid expectations the European Central Bank (ECB) and Bank of England (BoE) would tighten monetary policy. The STOXX 600 fell 1.4%, the Dax lost 1.8% and the FTSE 100 slipped 0.7%.

Over in Asia, the Nikkei 225 fell 2.1% as surging coronavirus infections resulted in Tokyo and 12 other prefectures being placed under Covid-19 quasiemergency measures.

UK and European shares remained in the red on Monday (24 January) as tensions grew between Russia and Ukraine. The STOXX 600 plunged 3.8% and the FTSE 100 slid 2.6%. Disappointing economic data also weighed on investor sentiment. The flash IHS Markit / CIPS UK composite output index fell to an 11-month low of 53.4 in January, as services activity was hit by the spread of Omicron.

The S&P 500 and the Dow both added 0.3% on Monday to recover some of last week’s sharp selloff. Investors are now looking ahead to the Federal Reserve’s two-day policy meeting on Wednesday, which will hopefully provide much needed clarity on US interest rates.

Last week’s economic headlines focused on mounting expectations that central banks will increase interest rates in the face of rising inflation. In the US, where inflation is running at its fastest annual pace in nearly 40 years, there is widespread speculation the Federal Reserve will hike rates in March, possibly by as much as 0.5%.

The likelihood of the BoE increasing the base interest rate in February also rose after the Office for National Statistics published the latest UK inflation numbers. The consumer prices index (CPI) surged by 5.4% in the 12 months to December – the highest in nearly three decades. On a monthly basis, the CPI rose by 0.5%, driven by price increases in transport, food and non-alcoholic beverages, furniture and household goods, and housing and household services.

Andrew Bailey, governor of the BoE, told MPs that inflationary pressures could prove more persistent than expected. He said energy prices are not expected to start easing until the second half of 2023 – a year later than previously forecast – partly because of tensions between Russia and Ukraine. He also warned there could be a ‘wage-price spiral’, where wages and prices keep chasing each other higher.

The latest UK consumer confidence index from GfK shows the impact surging inflation is having on people’s views of their personal finances and of the general economic situation. The overall index fell four points to -19 in January, the lowest reading since February 2021 and below analysts’ expectations of no change from December. 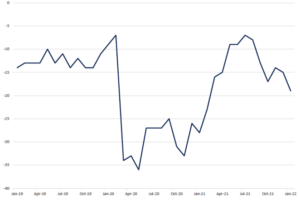 All five measures were down when compared with the previous month. People’s opinions of the economy were especially poor, with an eight-point decrease in how they viewed the past year and the year to come.

“Despite some good news about the easing of Covid restrictions, consumers are clearly bracing themselves for surging inflation, rising fuel bills and the prospect of interest rate rises,” said Joe Staton, client strategy director at GfK. “The four-point fall in the major purchase index certainly suggests people are ready to tighten their belts.”

Also weighing on the markets last week was an unexpected jump in US weekly jobless claims. These rose by 55,000 to 286,000 for the week ending 15 January, the highest level since mid-October and the steepest increase since last July.

The winter wave of Covid-19 infections is thought to be one of the drivers behind the increase. There was also discouraging housing market data, with figures from the National Association of Realtors (NAR) showing a 4.6% decline in existing home sales in December from the previous month. On an annual basis, sales were down by 7.1%. Lawrence Yun, chief economist at NAR, said the pullback was more a sign of supply constraints than weakened demand for housing. However, he added
that existing home sales would slow slightly in the coming months due to higher mortgage rates.

In contrast to the US and the UK, China last week stepped up its monetary stimulus by lowering mortgage lending benchmark rates. This came after data showed further weakening in the property sector, a downturn which is expected to persist into 2022.

Are We Heading Towards a Cashless Society?