Most major stock markets fell last week amid more negative inflationary data around the world, and ahead of a crucial meeting of central bankers and finance ministers around the world.

The S&P 500, Nasdaq, and Dax fell -1.21%, -2.62%, and -0.16% respectively last week as, despite some positive economic data, minutes from the Federal Reserve’s July meeting revealed markets should prepare for further rate hikes in the near term.

The picture was similar in Europe where rising inflation continued to unsettle markets. In Continental Europe, the Dax and Stoxx Europe fell -1.82% and -0.80% respectively, while the FTSE 100 managed to measure a small increase of 0.66%.

Markets were down in Asia – with the Hang Seng and Shanghai Composite indexes falling -2.0% and -0.57% respectively – but the Nikkei produced standout positive gains, rising 1.34% last week. This was off the back of encouraging economic data, with Japan’s economy growing in the summer.

A week of mixed news in the US

Last week, US markets were forced to react to a number of data points – both positive and negative – as the S&P 500 closed the week -1.21% down, ending a four-week long rally.

In terms of positive data, US weekly jobless claims were 15,000 lower than consensus expectations, which showed signs of returning strength to the labour market. There was also good news in a survey from the Philadelphia Federal Reserve, which showed manufacturing activity improving strongly – with a figure of 6.2 in August compared to the previous month’s -12.3.

Positive data like this caused some gains in the middle of the week but was soon offset by other metrics. For instance, the New York Federal Reserve painted a very different picture of manufacturing activity with a 42-point plunge in the same month. Minutes of the Federal Reserve’s July meeting were also published. These all but confirmed the likelihood of further interest rate hikes in the near term in a continued bid to suppress inflation. Fears of further hikes caused investors to flock to the dollar. The US dollar is often seen as a safe haven asset that investors go to when preparing for rate hikes. As of 22 August, the US dollar index – which measures the US currency against six others including the euro – edged up to 108.26 for the first time since July.

The timing of the Federal Reserve’s calendar has added to this movement to the dollar, with the crucial Jackson Hole symposium of central bankers and finance ministers due to take place this Thursday in Wyoming. The meeting will be closely watched by economists and investors around the world.

Last week, the UK’s inflationary environment continued to worsen as the consumer prices index (CPI) rose to 10.1% in the year to July, up from 9.4% the year before. The last time inflation was this high in the UK was in 1982, sparking fresh concerns about the cost of living as prices of food and domestic fuels continued to push higher. Many had been expecting inflation to continue climbing but the speed of this has surprised many economists as the consensus forecast had predicted only an increase of 9.8 %. 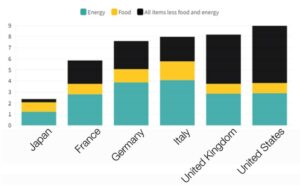 The largest companies in the UK continued to do well with the FTSE 100 posting gains by the end of the week, though many of these companies’ revenue streams are not dependent on the UK domestic market. Examples included AstraZeneca and Unilever, which rose 2.3% and 1.8% respectively. Investors also took confidence from the progress of the UK leadership race with poll data suggesting Liz Truss will beat Rishi Sunak to the role of prime minister, potentially giving greater certainty for investors.

A surprise rate cut in China

This was the first rate cut by the central bank since mid-January in a bid to support the economy as it has struggled to grow during widespread Covid-19 restrictions. On Monday, the country’s National Bureau of Statistics revealed that retail sales had slowed to 2.7% in July, down from 3.1% the previous month.

Despite the negative outlook for Chinese economic growth, some markets responded positively to the supportive stance taken by the central bank. On 22 August, the Shanghai Composite Index rose 0.61% though the Hang Seng Index in China fell 0.6%.

The economic picture was rosier in Japan last week, when data showed the country’s economy grew at an annual rate of 2.2% between April and June, largely driven by a rebound in consumer spending.

This was partly behind the Nikkei’s weekly gain of 1.34%. In Japan, inflation is creeping up and reached 2.6% for July – above the Bank of Japan’s 2% target but still significantly behind the figures seen in the US and Europe.

Why Investors Should Consider Adding Tech Stocks to Their Portfolio

5 Tech Investment Trends to Keep Your Eye On