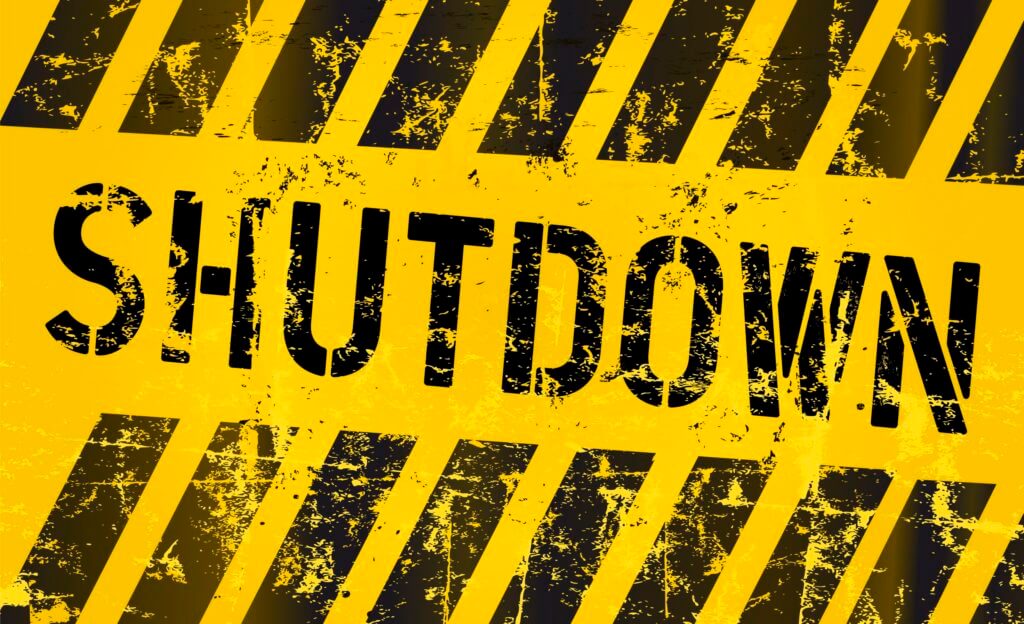 SHUTDOWN
Oil prices took a breather from their recent rally last week. Given the production caps in place for OPEC member, the IEA in Paris published an interesting report, which forecasts the US could surpass Saudi Arabia as an oil producer in 2018 as shale production comes on-line at higher prices. US production in 2017 was the highest for almost 50 years.
This week we have central bank meetings in Europe and Japan and ongoing discussions in the US to unlock the government shut down.

UNITED STATES
S&P 2,810 +0.86%, 10yr Treasury 2.64% +11.30bps, HY Credit Index 299 +5bps, Vix 11.27 +1.11Vol
There was not a great deal of news for markets to digest last week and therefore the status quo prevailed, with equities rising and bonds continuing to sell-off. Indeed, Tuesday was the best day for the S&P 500 since November, albeit given recent low volatility this was only a 0.94% gain.
From a data perspective, the release of most note was weekly US jobless claims, which fell to 220,000, the lowest reading since 1973 when the US population was some 30% smaller than today.
Elsewhere, the US Senate fell 10 votes short of backing a 4-week funding bill agreed by Congress sending the US government into shutdown. Since 1976, this is the 18th time the US government has failed to secure funding. The average shutdown has lasted 7 days, with the last one occurring in 2013. Interestingly, this is the 1st to occur when a single party controls both the House and the Senate. Whilst there is no agreement, 750,000 federal employees will be “furloughed”, which means they will not work and not be paid for the period they are at home. The impasse has prompted furious sniping from both sides, with Donald Trump aiming his “twitter gun” firmly at the opposition Democrats. However, members of his own party, voted against an extension, and discussions on Sunday were unable to break the stalemate. A key issue in the discussions is immigration, with Republican’s seeking funding with a border wall with Mexico. The next vote occurred on Monday 22nd January at 12:00 EST.
Last week, the Bank of Canada raised rates for the 3rd time since mid-2017 (to 1.25%) on the basis of stronger than expected economic growth. The central bank indicated that more rate hikes are likely over time, but noted uncertainty related to NAFTA renegotiation. This week, Montreal hosts a round of NAFTA trade talks.

EUROPE
Eurostoxx 3,649 +1.82%, German Bund 0.57% -1.30bps, Xover Credit Index 232 -4bps, EURUSD 1.224 -0.13%
European equities outperformed developed market peers, despite continuing Euro strength.
On Sunday, at a special SPD party congress, party officials voted in favour of joining a grand coalition with Angela Merkel’s CDU, in order to unlock a 4-month political deadlock in Germany. The vote was, however, closer than expected (362 voted in favour vs. 280 against) and a coalition agreement will now have to be put to the party’s 450,000 strong membership.
This week there is an ECB meeting where, although no change to policy is expected, investors will be extremely focused on the accompanying press conference. Given the acceleration of growth and recent Euro strength, Mario Draghi will be quizzed on the potential for changes to forward guidance (as soon as March or April) and the end of QE (in September). He will have to tread a careful path, as although governors of the ECB appear minded to dial back policy easing, they are also concerned about the strength of the Euro. In this sense, the January PMIs (also released this week) will be important.
Retail sales in the UK for December disappointed, confirming a weakening trend that has been in evidence since the end of 2016.
The CBT in Turkey left all rates unchanged, but tightened its forward guidance to add a hawkish slant to its policy decision.

ASIA
HSCEI 1,321 +5.76%, Nikkei 2,381.00 +1.23%, 10yr JGB 0.08% 0bps, USDJPY 110.770 -0.20%
On Tuesday, there is a Bank of Japan meeting, at which no change to policy is expected, but during which the central bank may upgrade its GDP forecast. There is some debate as to whether the BOJ will raise its long-term interest targets this year, given the better economic environment. 40% of economists surveyed by Reuters expect a change, and it would be in keeping with past behaviour.
China’s economy grew 6.8% YOY in Q4, coming in ahead of expectations. The outperformance was driven by strong investment and export growth.
The higher than expected growth rate in Q4 drove up the full year pace of expansion to 6.9% YOY for 2017, versus 6.7% for 2016. This is the first year in which China’s economy has accelerated, on a full year basis, since 2010.
India’s controversial tax reform efforts continue to hold the interest of investors. This week, the government announced plans to reduce the tax rates charged on 29 categories of goods and 53 categories of services.
Bank of Korea left rate son hold at 1.50%. The rates decision was in line with expectations, though the rhetoric was more dovish than expected, with the central bank’s 2018 inflation forecast reduced by 10bps. The change in tone was likely a bid to reduce the growing appreciation pressure on the Won.
Indonesia’s central bank left the reverse repo rate on hold at 4.25%. The statement reduces the probability of any further easing in the near term, commenting that “the window for a lower rate is closing”.
After 2017’s modest attempt to depreciate the rupee to a more competitive level, further evidence is emerging that Pakistan’s policymakers are finally waking up to smell the coffee. In an acknowledgement that significant action is still required to correct the country’s dire foreign reserve situation, the government official announced plans for a tax amnesty programme later this year.

LATIN AMERICA
MSCI Lat Am 3,073 +2.89%
Peru’s GDP grew 1.8% YOY in November. This unexpected underperformance seems to be due to a delayed fishing season and disappointing manufacturing output.
Argentina published a better than expected primary deficit for 2017, coming at 3.9% of GDP, below the 4.2% committed target. However, because of the recent borrowings and high domestic interest rates, the fiscal deficit (including interest payments) increased to 6.1% in 2017.
Colombia’s consumer confidence came in at -6% in December, yet again in contractionary territory (below 0) but improving form the -10% a month prior.

AFRICA
MSCI Africa 1,043 +3.90%
The South African central bank kept its benchmark repo rate unchanged at 6.75%, in line with expectations. The central bank governor noted that inflationary risks have subsided but the ZAR (which has strengthened 13% against the dollar since the last MPC) remains sensitive to political developments and the prospect of a ratings downgrade.
Nigeria’s inflation eased for the 11th consecutive month to 15.37% in December from 15.90% in November, driven by a decline in food inflation from 20.30% to 19.42%. On a MOM basis, the headline index increased by 0.59% in December 2017 compared to 0.78% in November.
In Egypt, average yield on 10-year EGP treasury bond fell over 300bps to 15.31% in 6 months.
Elsewhere in Egypt, President Abdel Fattah Al-Sisi ratified a Universal Healthcare Act designed to address the chronic underspend in Egyptian healthcare. The EGP600bn coverage plan will be funded through a range of taxes and will be slowly rolled out over 15 years from July 2018.
Lastly, 45% of Kenya’s tax revenue is to be used for debt repayment. The country will pay Sh658.2bn for loans in the current financial year, its single-largest expenditure and 45% of the Sh1.44 trillion that the Kenya Revenue Authority is expected to collect in taxes in the period to June.
This week’s global market outlook is powered by Alquity www.alquity.com