The S&P 500 recorded its worst weekly decline since the onset of the pandemic, sliding 5.8% and officially entering bear market territory (down more than 20% from its January peak). The Dow and the Nasdaq both fell 4.8% as the Federal Reserve announced its most aggressive rate hike since 1994.

In Europe, the STOXX 600, Dax and FTSE 100 all lost more than four percentage points as the European Central Bank (ECB) called an emergency meeting and the Bank of England (BoE) and Swiss National Bank both raised interest rates.

Fears of a global recession weighed on Japan’s Nikkei 225, which plummeted 6.7%. In contrast, the Shanghai Composite added 1.0% on news China had approved ten fixed-asset investments worth 121 billion yuan – a more than six-fold jump from April – in an effort to boost economic growth.

* Data from close on Friday 10 June to close of business on
Friday 17 June.

UK and European indices started this week in the green, with the FTSE 100 and STOXX 600 up 1.5% and 1.0%, respectively, at the close of trading on Monday (20 June). US markets were closed on Monday for a public holiday.

Figures from Rightmove showed UK house prices hit a record high for the fifth consecutive month in June to reach £368,614. However, the 0.3% month-on-month rise was the smallest increase since January and suggests the pace of price growth is slowing. Rightmove said price rises are expected to slow further in the second half because of worsening affordability challenges, bringing the annual rate of price growth down from the current 9.7% towards 5.0%.

The FTSE 100 was up 0.6% at the start of trading on Tuesday following a rebound in Asian markets overnight.

Last week’s economic headlines were dominated by the US Federal Reserve’s decision to increase interest rates by 75 basis points (bps), its steepest rate hike for nearly three decades. This takes the level of its benchmark funds rate to a range of 1.5-1.75%, the highest since just before the pandemic hit. 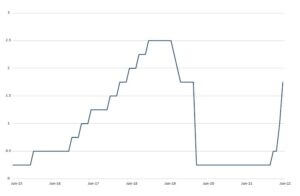 Fed chair Jerome Powell said the increase was “an unusually large one, and I don’t expect moves of this size to be common”. However, he added that the July meeting is likely to see an increase of 50 or 75 bps.

Members of the Federal Open Market Committee (FOMC) expect the benchmark rate to end the year at 3.4% and rise to 3.8% in 2023 – one percentage point higher than anticipated in March. The FOMC also cut its outlook for gross domestic product (GDP) growth for 2022 to 1.7%, down from 2.8% previously. Inflation, measured by personal consumption expenditures, is expected to measure 5.2% this year, up from 4.3% previously, before falling sharply to 2.6% in 2023.

US retail sales weaker than expected

Fears that interest rate hikes could spark a recession were exacerbated by disappointing US retail sales data. Sales fell unexpectedly in May by 0.3% from the previous month, driven by a steep decline in auto sales and a drop in furniture sales, according to the Department of Commerce. Economists had expected a rise of 0.3%.

Here in the UK, the BoE increased its base interest rate from 1.0% to 1.25%, the highest level in 13 years. This was the fifth time in a row that the Monetary Policy Committee voted to increase rates. It came after annual inflation rose to 9.0% in April amid large increases in global energy and goods prices, fuelled by the Ukraine war and the pandemic.

The Bank said inflation is expected to be over 9.0% during the next few months and top 11.0% in October, following an additional large increase in the Ofgem energy price cap. Meanwhile, GDP is expected to fall by 0.3% in the second quarter, worse than previously expected. The Bank did not update its outlook for the third quarter, but it has previously said it expects the economy to grow in July to September, meaning the UK would avoid a recession (defined as two consecutive quarters of shrinking GDP).

The ECB held an emergency meeting last week to address rising borrowing costs in some member states. This followed a surge in bond yields in countries like Italy and Spain and growing fears that the eurozone could be on the cusp of another debt crisis.

Noting the widening gap in the cost of borrowing between stable countries like Germany and other more vulnerable member states, the ECB said it would accelerate plans to create a “new anti-fragmentation instrument”. It also said its governing council had approved plans to apply flexibility in the way it reinvests bond proceeds from its Pandemic Emergency Purchase Programme – in other words, focusing on buying the bonds of vulnerable member states like Italy.