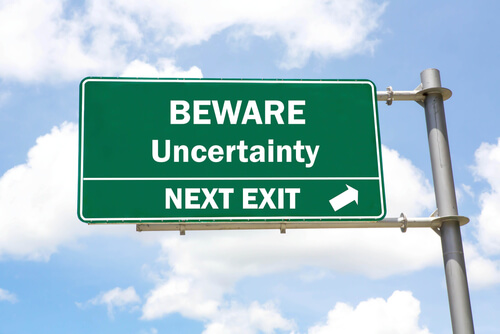 INTENSIFYING POLITICAL UNCERTAINTIES WEIGH ON INVESTORS’ RISK APPETITE
The Trump administration took the markets by surprise as the Office of the US Trade Representative announced that tariffs on Chinese imports to the US will be delayed to the 15th December on a range of goods such as mobile phones, computers and video game consoles. However, markets remain unsure how to interpret this move in the context of sluggish German economic activity, inverting yield curves in developed markets, protests in Hong Kong, Brexit-related economic and market jitters and increasing probability of the return of a populist government in Argentina. The combined impact of these developments triggered massive capital flows seeking safe haven assets. As a result of intensifying risk aversion, sovereign bond yields plummeted and hit new historical lows in Germany and Switzerland, where the 10-year yields decreased to -0.7% and -1.1%, respectively. It will be more relevant than ever to listen carefully to the speech by Fed Chair Jerome Powell at the annual Jackson Hole Symposium (23-24 August), as the Chair’s speech will most likely shape global investor sentiment.

UNITED STATES
S&P 2,889 -1.03%, 10yr Treasury 1.59% –19.09bps, HY Credit Index 357 +3bps, Vix 18.18 +.50Vol
Risk-aversion intensified during the week, as the majority of stock indices declined, whilst Treasury yields significantly decreased. The S&P500 lost 1% of its value, decreasing the year-to-date gain to 15.2%. The whole Treasury curve shifted downwards, as the 2-year yield decreased 17bp to 1.50% and the 10-year declined 19bp to 1.58%. The pricing by the Fed funds futures market continues to imply a large-scale monetary stimulus by the Fed, as the broad market foresees the end of the rate cutting cycle at 1.00-1.25% by 2Q20, i.e. 100bp lower than the current rate.
Core CPI inflation was 2.2% YoY, whilst retail sales volume grew 0.7% MoM in July. Both inflation and retail sales metrics suggested that domestic economic activity remained strong in the US. In contrast, industrial production volume contracted 0.2% MoM in July. The decline in industrial production was in line with soft indicators, such as the manufacturing PMI, etc.
Real GDP growth in the US could be around its long-term potential in 3Q19 primarily led by strong consumer spending, which is supported by real wage growth and a low unemployment rate.

EUROPE
Eurostoxx 3,353 -1.19%, German Bund -0.66% -10.90bps, Xover Credit Index 274 -1bps, USDEUR .901 +1.05%
European stock markets strongly declined during the week, including the stock indices in the Eurozone’s four largest economies: the Italian index lost 1.1% of its value, the French benchmark decreased 1.6%, the Spanish one declined 2%, whilst the German index edged down 2.2% (all in USD). As stock indices headed south, bond prices significantly rose on the back of capital flows searching for safe haven assets. Consequently, the 10-year German Bund yield eased 11bp to -0.69%, whilst the Italian 10-year yield decreased significantly by 41bp to 1.40%.

The Chinese central bank (PBoC) announced the reform of monetary policy framework, including the formation of the market interest rate. According to the PBoC, the new mechanism is more market-oriented, thus helping lower banks’ lending interest rate.
Inflation in India remained benign, as the headline CPI inflation gauge was 3.2% YoY in July. Food inflation remained contained, which accounts for almost half of the consumption basket.
As the amount of monsoon rains are around historical normal levels, the risk of a sharp pick up in food inflation has decreased. As a result, the RBI will find further room for policy manoeuvre to decrease the policy rate, which is currently at 5.40%.
Malaysian real GDP growth was 4.9% YoY in 2Q19, stronger than in the previous quarter when headline growth was 4.5% YoY. The strengthening was broad-based with household consumption remaining the primary driver.
Real GDP growth will be between 4.5-5% in full-year 2019. Should the Malaysian economy show (unexpected) weaknesses, the central bank will provide impetus by reducing the policy interest rate.

LATIN AMERICA
MSCI Lat Am 2,610 -5.67%
The degree of risk-aversion intensified in the Latin American space, which was also captured by the MSCI EM Latin America index (-5.7% in USD). Investor sentiment was strongly disrupted by the trade spat between the US and China as well as by the Argentine political news flow. During the week, the Argentine market delivered the poorest performance, as the country’s stock index declined 44.7% in USD on the week. Despite the market-positive domestic news flow from Brazil (i.e. the release of the timeline for the pension reform bill in the Senate), the benchmark index decreased 5.7% in USD. Colombia’s stock market was the most resilient during the week, as the country’s stock index decreased to the smallest extent (-1.2% in USD).
The central bank of Mexico opted for a 25bp rate cut reducing the policy rate to 8%. The decision, however, was not unanimous. The MPC argued that slower inflation, weaker economic activity and the Fed’s rate cut allowed for policy manoeuvre.
Economic activity in Peru strengthened to 2.6% YoY in June, bouncing from 0.7% YoY in May. Construction, commerce and services activity contributed to the strengthening of economic activity.  Overall, economic activity increased 1.2% YoY in 2Q19.
Colombian economic activity was robust in 2Q19, when the economy expanded by 3% YoY primarily driven by domestic drivers, such as construction and services. Overall, GDP growth was 3% YoY in 1H19.
Fitch downgraded Argentina’s sovereign debt rating from ‘B’ to ‘CCC.’ The credit rating agency highlighted the uncertainty following the results of the primary elections, coupled with a severe tightening of financing conditions and an expected deterioration in the macroeconomic environment. Additionally, Fitch argued that a victory by the opposition in the October elections increases risks of discontinuation of policies agreed with the IMF.

AFRICA
MSCI Africa 718 -2.19%
Egypt was one of the brightest spots in Africa during the week, as the country’s stock index was up 0.6%, whilst other African markets were down. The South African market delivered the weakest performance during the week, as it declined 4.4% in USD.
Consumer price inflation in Nigeria was 11.1% YoY in July, slowing from 11.2% YoY in June, as food price inflation slightly eased to 13.4% YoY.
Retail sales volume grew 2.4% YoY in South Africa in June, matching the pace seen in May. Details revealed that a bounce in clothing and footwear sales contributed to the sustained pace of growth. Since the beginning of the year, volume of retail sales increased by 1.7% YoY, suggesting a muted demand environment.
Inflation in Egypt slowed to 8.7% YoY in July, despite a round of fuel subsidy cuts.
Broad-based disinflation in the domestic economy and a more dovish Fed could allow the central bank to deliver a policy rate cut, which is currently at 15.75%. By loosening financial conditions, Egyptian economic activity will further strengthen.
This week’s global market outlook is powered by Alquity www.alquity.com