Stock markets were volatile last week as US inflation rose at a faster rate than expected and the European Commission lowered its growth forecasts.

US indices fell sharply on Wednesday after the Labor Department reported that the consumer price index (CPI) had hit a new 41-year high in June. However, separate inflation data released on Friday was interpreted as good news by investors and helped to limit losses for the week. The S&P 500 finished the week down 0.9%, while the Dow and Nasdaq slipped 0.2% and 1.6%, respectively.

The pan-European STOXX 600 fell 0.8% and Germany’s Dax declined 1.2% amid ongoing concerns that Russia may extend the closure of the Nord Stream 1 gas pipeline to Germany. The FTSE 100 eased 0.5% as an unexpected expansion of UK gross domestic product (GDP) helped to limit losses.

In China, the Shanghai Composite fell 3.8% as GDP in the second quarter grew by just 0.4% from a year earlier, down from a 4.8% expansion in the first quarter.

*Data from close on Friday 8 July to close of business on Friday 15 July.

The price of Brent crude oil rose 2.6% on Monday (18 July) after a meeting between US president Joe Biden and Saudi Arabia’s Crown Prince Mohammed bin Salman didn’t result in a pledge to raise oil output. This boosted energy shares and helped the FTSE 100 climb 0.9% on Monday. In the US, the S&P 500 slid 0.8% after Bloomberg reported that Apple was planning to slow hiring and spending growth next year.

The FTSE 100 started Tuesday’s trading session in the red as investors digested the latest UK jobs data. The unemployment rate held at 3.8% in the three months to May, while the number of people in employment rose by 296,000 – the biggest increase since the three months to August last year. However, regular pay in real terms (excluding bonuses and adjusted for inflation) was 2.8% lower than a year ago.

Last week saw the release of the closely watched US CPI, which showed consumer prices rose by 9.1% in the 12 months to June, the fastest pace since 1981. This was higher than the 8.6% jump seen in May and the 8.8% rise forecast by economists. 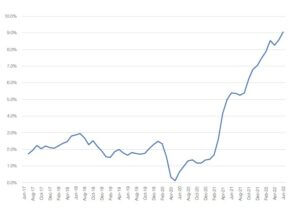 Gasoline prices surged by 59.9%, while the price of food and shelter increased by 10.4% and 5.6%, respectively. Core CPI, which strips out volatile food and energy costs, rose by 5.9% from a year ago, higher than the 5.7% estimate but lower than the March peak of 6.5%.

On a monthly basis, consumer prices increased at a faster-than-expected rate of 1.3% after advancing by 1.0% in May. Adjusted for inflation, workers’ hourly wages fell by 1.0% month-on-month or 3.6% from a year ago.

Fears that inflation could result in the Federal Reserve hiking interest rates by 100 basis points at its next policy meeting were somewhat alleviated by a drop in consumers’ inflation expectations. The University of Michigan’s consumer sentiment survey for July showed Americans expect inflation to measure 2.8% in five years’ time, down from 3.1% previously and the lowest level in over a year.

Over in Europe, the European Commission lowered its GDP growth forecast for 2023, saying the war in Ukraine had set the economy “on a path of lower growth and higher inflation” when compared with its spring forecast. The EU economy is expected to grow by 1.5% next year, while the euro area is expected to grow by 1.4%, both down from the previous 2.3% projection.

Valdis Dombrovskis, European commissioner for trade, said: “Russia’s war against Ukraine continues to cast a long shadow over Europe and our economy. We are facing challenges on multiple fronts from rising energy and food prices to a highly uncertain global outlook.”

Inflation is expected to peak at 8.4% in the third quarter in the euro area, before declining steadily and falling below 3% in the last quarter of 2023. However, the commission said this will depend on the evolution of the war – in particular, its impact on Europe’s gas supply.

Here in the UK, the economy returned to growth in May, with GDP expanding by 0.5% from the previous month, following a 0.2% decline in April. This was mainly driven by a large rise in GP appointments. Economists had been expecting zero growth in May because of the rising cost of living.

Consumer-facing services fell by 0.1% as retail trade declined. However, this was better than the 0.8% contraction in April thanks to a surge in holiday bookings. Production grew by 0.9% while construction expanded by 1.5%, the seventh consecutive month of growth.

How to Make the Most of Life in Retirement

The Top 4 Things You Should Do as You Approach Retirement