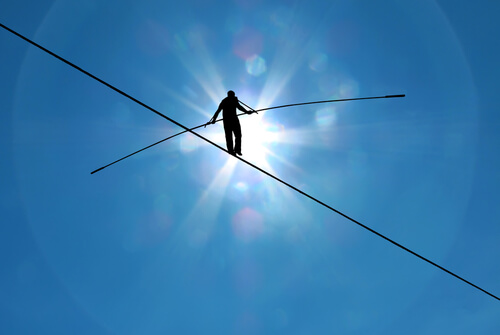 WALKING THE TIGHTROPE
Last week the potential for greater monetary policy uncertainty given the FED’s Board of Governors is due to change almost entirely over the next 6 months was highlighted. Indeed, investors everywhere are walking a “Goldilocks tightrope” – the combination of strong near-term growth but low inflation and confidence about longer-term economic conditions means it is “not too hot” to worry about rising rates and “not too cold” to raise concern about slower earnings.
After a summer rally, global bonds sold-off sharply over the past 10 days on a combination of a hawkish Bank of England, declining risk-aversion and reasonable data. For now, this did not upset the unstable equilibrium, with equity markets rallying alongside falling bond prices. It is expected that central banks will tighten, but only gradually. In other words, despite the potential for crosswinds, monetary policy will not be the lever that knocks markets off balance.
Elsewhere, the UN Security Council unanimously voted to adopt a watered-down US resolution to impose new sanctions on North Korea. The resolution includes limits on imports of crude oil, a ban on textile exports (the country’s 2nd largest export worth USD 700m per year) and a ban on new visas for North Korean workers (estimated to cost USD 500m in tax revenue). North Korea’s ambassador to the UN stated, “The forthcoming measures by the Democratic Republic of Korea will make the US suffer the greatest pain it has ever experienced in its history.”

UNITED STATES
S&P 2,500 +1.58%, 10yr Treasury 2.21% +15.16bps, HY Credit Index 325 -9bps, Vix 10.17 -1.95Vol
The US 10-year gave back much of its recent gains with the yield shifting from 2.06% to 2.20%. Moreover, the market implied probability of a December rate hike increased to nearly 60% from 30% a week ago. Contributing to the move, CPI inflation for August came in higher than expected, with the biggest one-month gain since January (albeit the headline and core measures were still below target at 1.9% and 1.7% respectively).  Other data was, however, weaker including below expectations or moderating readings for industrial production, retail sales, Empire State manufacturing and Michigan consumer sentiment. This week there is an FOMC meeting at which it is expected that balance sheet normalisation will begin as the FED allow a certain USD amount of bonds to mature each month without reinvestment. More pertinent for the market, will be the discussion around inflation and the likelihood of a rate hike before the end of the year.

EUROPE
Eurostoxx 3,516 +1.28%, German Bund 0.44% +12.10bps, Xover Credit Index 224 -9bps, EURUSD 1.194 +0.75%
The GBP was the best performing currency in the world last week and the 10 year gilt yield rose 32bps, after the Bank of England delivered a much more hawkish statement than expected. In particular, “all MPC members continue to judge that, if the economy follows a path broadly consistent with the August Inflation Report central projection, then monetary policy could need to be tightened by a somewhat greater extent over the forecast period than current market expectations.” As a consequence, the FTSE 100 fell to a 4-month low in GBP terms as the value of exports was marked down.
Next weekend, Germany holds a general election. There has been little attention on this event, given polls suggest a clear victory for Angela Merkel’s CDU. The incumbent Chancellor is likely to enter a coalition with either the SPD or FDP with, in both cases, a promise of fiscal stimulus.
Greek equities continued to buck the broader positive trend – bank shares are down between 15-20% over the past month as the IMF insists on its own review of asset quality as part of the 3rd bailout (this is despite opposition from the EU who carry out their own stress tests).
The Central Bank of Turkey left policy on hold whilst the Central Bank of Russia cut rates by 0.50% to 8.50%. As the oil price and Rouble stabilise, prices pressures are again declining, which should allow a cutting cycle to continue. This week, the National Bank of Hungary is likely to hold interest rates at 0.90%.

ASIA
HSCEI 1,119 -0.86%, Nikkei 1,990.00 + 0.55%, 10yr JGB 0.03% +0bps, USDJPY 111.330 +2.79%
China’s latest batch of activity data came in softer than expected, though the property sector remained firm. Retail sales slowed from 10.4% YOY in July to 10.1% in August, while fixed asset investment (from 8.3% to 7.8%) and industrial production (from 6.4% to 6.0%) also decelerated. This was in contrast to the strong August PMI numbers and the latest property data, which showed nationwide sales in August rose 6.4% YoY.
As for the weaker broader activity data in August, softer exports and mining production were among the most significant causes. Inflation data also came out slightly faster in August, with CPI and PPI now running at 1.8% and 6.3% respectively.
India’s consumer price inflation rate jumped in August to 3.4%, up from 2.4% in July, reaching a 5-month high. Wholesale prices were also firmer, with WPI increasing from 1.9% YOY to 3.2%. The cost of food was the standout source of price pressure, and, given that food prices in India have a high degree of volatility, there is little to suggest that we are entering any kind of inflationary cycle in India, with agricultural factors being the key driver at this point.
Industrial production in India picked up in July. From June’s 0.2% YOY contraction, July saw growth of 1.2% YOY. This trend is in line with the strength of India’s most recent manufacturing PMI data, suggesting that GST-related destocking had a short term impact on activity levels and that a bounce back can reasonably be expected on a 1-2 quarter view.
India’s trade deficit was largely unchanged month on month in August, while the Q2 current account deficit came in at 2.4% of GDP, the highest quarterly deficit since Q2 2013. While export growth was an impressive 10.3% YOY in August, imports grew even faster at 21.0%.
Elsewhere in Asia, Indonesia reported a 69-month high trade surplus of US$1.2bn for August, while Philippines remittance growth accelerated to 7.1% YOY.

LATIN AMERICA
MSCI Lat Am 2,988 +1.56%
Brazil Prosecutor-General Rodrigo Janot filed a new accusation against President Michel Temer of crimes of criminal organisation and obstruction of justice.
According to the law, for the Brazilian President to go on trial, Congress must grant permission in a plenary vote requiring a 2/3 majority. This prosecution is likely to be rejected once again as, last week, new evidence has emerged which strengthened Temer’s position versus the Attorney General’s office.
Mexico’s industrial production fell 1.6% YOY in July, surprising to the downside. A pronounced deterioration of construction activity (which reflects the weakness of investment) explains most of the fall.
Chile’s consumer confidence rose to 41.1 in August from 41 in July and up 9.6 points compared to last year.
Colombia’s recovery is underway as retail sales gained 3.1% YOY in July and industrial production grew 6.2% YOY, well above the market consensus (4%). After a sluggish start to the year following the fiscal reform and the peace process, 2H17 growth should come higher.
Argentina’s central bank kept the benchmark interest rates unchanged at 26.25% as expected.
Peru’s central bank cut the benchmark interest rate to 3.5% from 3.75%. From now on, the central bank will become inflation-dependent and will closely watch how the economy reacts to the fiscal stimulus from reconstruction works (following floods and El Nino).
Peru’s government will be reshuffled as Congress denied the vote of confidence to Fernando Zavala’s cabinet. Prime minister, Fernando Zavala asked for a vote of confidence because the Fujimori controlled Congress called to vote for a censorship for Minister of Education Marilú Martens on alleged mismanagement of a 2-month long teacher’s union strike.

In Kenya, rumblings this week were all about rate caps with the Kenyan central bank signalling a repeal of the year-old interest rate cap (government capped commercial lending rates at 4% above the central bank rate). This would be to encourage more lending from banks and make them more responsive to monetary policy. Legislators however remain unsupportive and have warned that any attempt to change the law is doomed to fail.
In Nigeria, the administration of President Buhari and the 36 states of the federation have borrowed N7.51tn (USD 20.8bn) in the last two years, taking Nigeria’s total debt to N19.63tn (USD 64bn).
Staying in Nigeria, external reserves rose to USD33bn (a 31-month high) on the back of rising oil prices, increased production and relative stability in the Niger Delta. Also, annual inflation slowed for a seventh month in August, easing to 16.01% compared to 16.05% in July.