Stock markets were mixed last week as US inflation proved higher than expected and the UK government announced its second major mini-budget U-turn.

The S&P 500 dropped sharply on Thursday morning as the latest US consumer prices data was released, before surging 5.5% in its largest intraday move since March 2020. The index ended the week down 1.6% after data on Friday showed consumer inflation expectations had worsened.

In the UK, the FTSE 100 lost 1.9% and yields on ten-year gilts retreated from near 14-year highs after the government reversed its decision to scrap a planned increase in corporation tax. The Dax gained 1.3%, despite Germany’s economy minister predicting a 0.4% decline in the country’s gross domestic product (GDP) next year.

In China, the Shanghai Composite rose 1.6% after the governor of the People’s Bank of China said the central bank would step up the implementation of prudent monetary policy and provide stronger support for the real economy.

* Data from close on Friday 7 October to close of business on Friday 14 October.

New UK chancellor Jeremy Hunt announced on Monday (17 October) the reversal of almost all the tax-cutting measures contained in last month’s mini-budget. The planned reduction in basic-rate income tax and the reversal of the dividend tax rate hike will no longer go ahead. Plans to freeze alcohol duty, introduce VAT-free shopping for tourists and reverse off-payroll working rules have also been overturned.

The emergency statement came just one working day after UK prime minister Liz Truss announced the departure of former chancellor Kwasi Kwarteng following weeks of market turmoil. Truss also overturned plans to cancel next year’s increase in corporation tax. Together with the decision to scrap proposals to axe additional-rate income tax, the changes are expected to save the Treasury around £32bn a year.

The pound rose, gilt yields fell and the FTSE 100 rose 0.9% on Monday as investors welcomed Hunt’s emergency statement. The positive sentiment continued in Europe and the US, with the pan-European STOXX 600 and S&P 500 climbing 1.8% and 2.7%, respectively.

Investors will now be looking ahead to a big week for US corporate earnings, including from the likes of Netflix, Tesla and IBM. 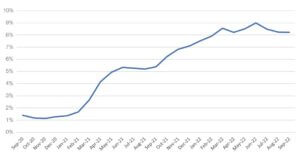 More concerning was a 6.6% annual rise in core inflation, which strips out volatile energy and food costs. This was higher than the 6.3% rate in August and the fastest pace in four decades. On a monthly basis, core CPI was up 0.6%. President Joe Biden said Americans were being squeezed by the cost of living and that there was “more work” to do to fight inflation.

The CPI was followed a day later by the University of Michigan’s consumer sentiment index, which showed expectations for price rises over the next 12 months had risen to 5.1% in October from 4.7% in September. Five-year inflation expectations increased to 2.9% after falling to 2.7% the previous month. Consumer sentiment improved modestly, with the index rising to 59.8 from 58.6 in September. The current economic conditions index jumped to 65.3 from 59.7.

The UK’s GDP shrank by 0.3% in August from the previous month, led by a 1.6% decline in manufacturing. GDP also fell by 0.3% over the three months to August, suggesting the 0.1% increase in July reflected a rebound from the Queen’s platinum jubilee celebrations the previous month. Services fell by 0.1% in August, driven by cuts to health service spending and a 5.0% drop in arts, entertainment and recreation activities. Output in consumer-facing services declined by 1.8% following a 0.7% rise in July, according to the Office for National Statistics.

China celebrated a weeklong National Day holiday – known as Golden Week – at the beginning of October. The week is typically a peak period for travel and consumption, but tourism revenue this year was down 26.2% from a year ago and equal to just 44.2% of the revenue in 2019’s Golden Week. Some popular tourism destinations remain subject to strict Covid curbs, resulting in many people choosing to stay close to home.

Authorities in cities such as Beijing and Shanghai tightened restrictions ahead of the Communist Party’s congress, which began on Sunday. The congress will lay out the party’s policy for the next five years. It is expected that president Xi Jinping will win a third term as party general secretary.