The pan-European STOXX 600 bounced back from its earlier losses to finish the week up 0.8%, while Germany’s Dax rose 2.6%. The FTSE 100 added 0.4%, notwithstanding data showing UK gross domestic product (GDP) unexpectedly contracted in March.

Chinese stocks also rose as the number of Covid-19 cases declined and the China Securities Regulatory Commission pledged to boost confidence in the Shanghai Composite, which is Asia’s worst-performing index so far this year. The index ended the week up 2.8%.

In contrast, US indices fell amid fears the Federal Reserve’s attempts to rein in inflation by increasing interest rates would spark a recession. The Dow fell 2.1% in its seventh consecutive week of losses, while the Nasdaq and S&P 500 slipped 2.8% and 2.4%, respectively.

Stocks were mixed on Monday (16 March) after data from China showed the country’s zero-Covid policy had hit economic activity. The Shanghai Composite slipped 0.3% as retail sales slumped 11.1% year-on-year in April – much worse than the 6.1% decline forecast by economists in a Reuters poll. Industrial production fell 2.9% from a year ago, while unemployment in China’s 31 largest cities jumped to 6.7%.

US indices were mostly in the red on Monday, whereas the FTSE 100 managed to reverse earlier losses to finish the trading session up 0.6%.

The FTSE 100 was up 0.4% at the start of trading on Tuesday as investors mulled the latest jobs data from the Office for National Statistics (ONS).

Last week’s economic headlines focused on the unexpected contraction in the UK economy. Figures from the ONS showed GDP slipped by 0.1% in March, driven by a 0.2% decline in services as consumers cut back on spending. Consumer-facing services plunged by 1.8%, led by a sharp 2.8% fall in wholesale and retail trade. Production also fell by 0.2%, whereas construction grew by 1.7%.

The fall in GDP came as a surprise to investors who had been expecting a small rise from the previous month. Figures for February were also revised down from 0.1% growth to no growth, which meant the economy expanded by just 0.8% in the first quarter, less than the 1.0% growth forecast by economists. 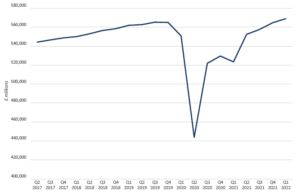 The data has exacerbated fears that the UK could slide into a recession – defined as two consecutive quarters of declining GDP – later this year. It comes as households face the biggest cut in real incomes since the 1950s as inflation outpaces wage gains. The ONS is expected to announce that inflation topped 8.0% in the 12 months to April when it releases the next consumer prices index report on Wednesday (18 May).

US inflation moderates less than hoped

Over in the US, inflation slowed in April to an annual rate of 8.3%, down from 8.5% in March, according to the Labor Department. While the data suggests price increases may be peaking, the rate of inflation was higher than consensus estimates of around 8.1%. Core inflation, which excludes food and energy, also pulled back less than expected to 6.2% versus estimates of 6.0%.

On a monthly basis, prices rose by 0.3% in April, the smallest increase in eight months. However, prices for services surged by 0.7% and airline fares jumped by 18.6%, the largest increase on record. The price gains mean workers continue to lose out, with real wages falling by 0.1% month-on-month despite a nominal increase of 0.3% in average hourly earnings. Over the past year, real earnings have dropped by 2.6%.

The inflation report came in the same week as data showing US consumer sentiment slumped to its lowest level for nearly 11 years in early May. The University of Michigan’s preliminary results showed the index of consumer sentiment fell to 59.1 in May from 65.2 in April. The gauge of current economic conditions dropped to 63.6, the lowest reading since 2013, with 36% of consumers attributing their negative assessment to inflation. Buying conditions for durables reached the lowest reading since the question began appearing on the monthly surveys in 1978, again primarily due to high prices. Meanwhile, the measure of consumer expectations fell to 56.3 from 62.5.

Christine Lagarde, the president of the European Central Bank (ECB), said in a speech last week that she expected the bank to stop expanding its balance sheet through bond purchases early in the third quarter and to raise interest rates “some time” after that, which “could mean a period of only a few weeks”. The comments have led several economists to declare that the first rate hike for more than a decade will go ahead in July. A growing number of governing council members are calling for a 25-basis-point rise in the ECB’s deposit rate at the 21 July policy meeting. The deposit rate is currently -0.5% and has been negative since 2014.

It comes amid concerns that Russia’s invasion of Ukraine could keep inflation high for longer than initially expected. According to comments reported in the Financial Times, Lagarde said the war was “likely to accelerate two ongoing structural changes which, during the transition they entail, could lead to further negative supply shocks and cost pressures”. She added that the ECB’s new quarterly forecasts to be published in June were “increasingly pointing towards inflation being at least on target over the medium term”.