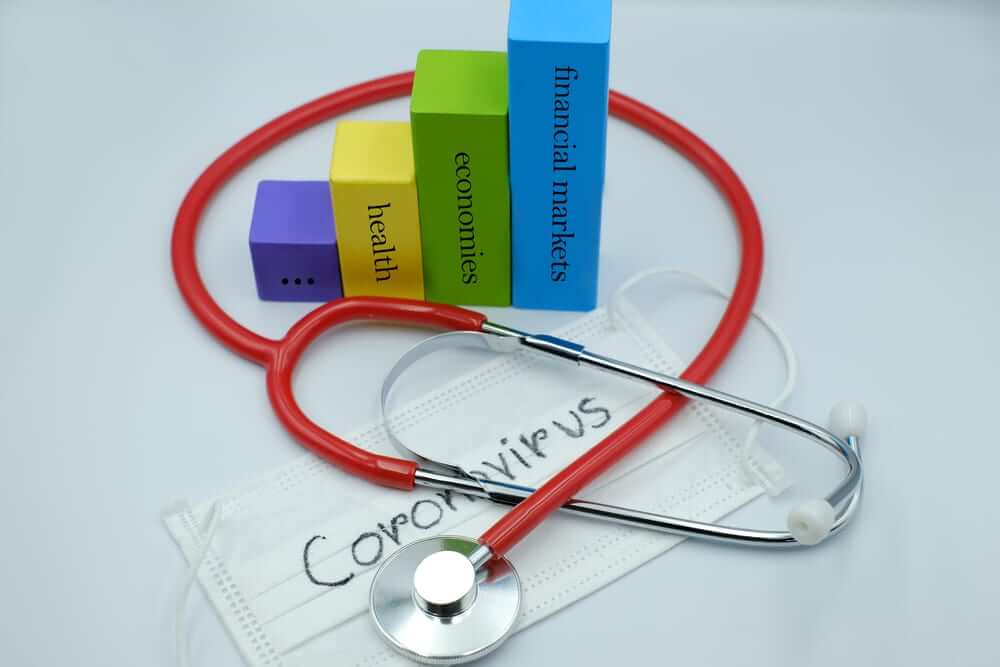 THE FED HAS GONE ALL IN ON SUNDAY
Despite the positive start of the year, the economic disruption caused by the Covid-19 has most likely led to a significant weakness across multiple industries globally. Although the range of available hard data remains limited to gauge actual activity, it is a foregone conclusion that we will probably see evidence of a weakening global economy in the first half of 2020.
To cushion the (expected) economic slowdown and to try ensure global financial stability, the Federal Reserve on Sunday reduced the Fed funds rate to its zero lower bound, committed to an open-ended asset purchase programme (at least USD 500bn US Treasuries and USD 200bn mortgage-backed securities) and opened USD swap lines with five major central banks. However, the monetary policy itself may not be a panacea for the underlying issue brought about by the Covid-19.  This idea was also echoed by the Fed Chair’s cautious words during his press conference on Sunday.
The trillion-dollar question is when the US administration will finally present a comprehensive fiscal plan in the amount of at least 0.5% of GDP.

UNITED STATES
S&P 2,711 -8.79%, 10yr Treasury 0.78% +19.80bps, HY Credit Index 555 +164bps, Vix 57.83 +15.89Vol
Financial asset prices in the US exhibited a very high level of volatility by end of trading hours on Friday, as the global spread of the coronavirus dented investor sentiment. Major stock indices declined (e.g. the S&P 500 lost 8.8% of its value during the week). Financial markets switched to overdrive, as fear spread, certain segments of the Treasury, credit and mortgage-backed securities markets became too illiquid triggering unwarranted yield spikes, which abruptly raised the 10-year Treasury yield by 20bp to 0.96% by the end of Friday. In order to restore the orderly functioning of the funding markets, the Federal Reserve brought forward its monetary policy decision meeting from Wednesday to Sunday and delivered an extraordinary stimulus package (including reducing interest rates to the zero lower bound, starting a large-scale asset purchase programme and opening USD swap lines with five major central banks globally).

EUROPE
Eurostoxx 2,474 -21.57%, German Bund -0.58% +16.60bps, Xover Credit Index 610 -149bps, USDEUR .893 +2.05%
European stock markets were hit badly during the week, as many of the major stock indies declined by over 20% (in USD terms). The European Central Bank had a scheduled monetary policy meeting on Thursday after which Governor Lagarde provided forward guidance. Due to an unfortunate mistake the Governor made during her speech, investors did not find comfort in the ECB’s policies and guidance. Later, the Governor herself and other senior ECB officials, tried to correct the policy error. As a result of the combination of risk-averse investor sentiment and the Governor’s faux pas, German sovereign yields rose (the 10-year by 17bp to -0.54% by the end of Friday), whilst periphery spreads spiked (e.g. the 10-year Italian yield increase 71bp to 1.79% by the end of Friday).

ASIA
HSCEI 9,210 -7.76%, Nikkei 17,002.04 -17.69%,10yr JGB 0.02% +0bps, USDJPY 106.410 +2.07%
Asian stock markets faced a challenging week, as the global spread of the coronavirus weighed on investor sentiment. In this environment, Chinese “A” shares (-5.9% in USD) were one of the most resilient, followed by the Pakistani benchmark (-7.4% in USD) and the Chinese “H” shares (-7.8% in USD).
The Chinese economy weakened significantly in January and February. The fact came as no surprise; however, the magnitude is unexpected. Industrial production declined 13.5% YoY YTD in January-February. Nominal retail sales shrank 20.5% YoY YTD, whilst fixed asset investments contracted 24.5% YoY YTD in January-February. Furthermore, unemployment rate rose to 6.2% in February, up from 5.2% in December, according to the official figures published by the Chinese Statistics office.
Industrial production in India grew 2% YoY in January, improving relative to December, when industrial activity decreased 0.3% YoY. Meanwhile, consumer price inflation moderated to 6.6% YoY in February, slowing from 7.6% YoY in January. The deceleration is primarily driven by food prices, which decreased 2% MoM, whilst the annual rate of price growth slowed to 9.5% (as vegetable, fruit and egg price inflation moderated). Later the balance of payments statistics were released, which revealed that the current account deficit significantly narrowed in CY4Q19, to USD 1.4bn.
The central bank of Philippines remains upbeat on economic growth prospects for 2020. Despite the adverse impact of the coronavirus, the central bank continues to expect a real GDP growth rate north of 6%.

LATIN AMERICA
Latin American stock markets declined during the week, as global risk aversion further intensified due to the coronavirus. The Chilean stock index decreased to the smallest extent (-12.3% in USD) compared with its regional peers.
The Minister of Economy in Brazil announced a stimulus package to help contain the adverse impact of the coronavirus on the economy. Measures include lowering interest rates for payroll loans for retirees and a BRL 5 billion package in extra resources to the Ministry of Health. However, the government’s efforts to keep fiscals account as stable as possible, whilst creating room for further future fiscal manoeuvre was overturned by Congress by easing the eligibility criteria for granting welfare benefits.
The government and the President still have options on how to reverse the move by Congress. However, due to the uncertainty of the outcome, the volatility of Brazilian financial asset price has increased.
The central Bank of Peru held its reference rate unchanged at 2.25%. The Monetary Policy Council’s (MPC) official statement highlighted risk factors to monitor going forward, such as inflationary developments, inflation expectations, downside risks to domestic demand, etc. The statement also noted that public investment by the government increased in the first two months of the year and indicators of economic activity have showed a modest recovery, whilst business expectations deteriorated in February. The MPC emphasized that risks on global and local economic activity have deepened due to the coronavirus shock.
President Duque in Colombia announced a set of economic measures to mitigate the shock from the coronavirus. Measures specifically target the hospitality and air travel industry, including tax payment delays, changing deadlines for VAT and income tax payments in these industries. The government will open a COP 250bn (ca. USD 65mn) credit line for tourism companies.
Industrial production in Mexico decreased 1.6% YoY in January, as manufacturing activity kept weakening.

AFRICA
As global investor sentiment deteriorated, and risk appetite weakened during the week, African stock indices declined. In this environment, the Egyptian stock index was a relative outperformer in the African region, as the Hermes stock index decreased 9.5% in USD. Other benchmarks, such as the Nigerian one (-13.9% in USD) and the South African TOP40 (-18.7% in USD) declined to a greater extent by the end of the trading week.
Consumer price inflation in Egypt was 5.3% YoY in February, slowing from 7.2% YoY in January. Food price inflation, which account for third of the consumer basket in Egypt, decelerated to 2.3% YoY. Meanwhile, core inflation – a gauge which filters out food and fuel prices – eased to 1.9% YoY.
Although inflationary developments would allow for rate cuts, the central bank may stay put as long as global risk appetite recovers in order to promote financial stability.
South African state power utility Eskom said that it would cut up to 4,000 megawatts (vs. the previously planned 2,000 megawatts) from the national grid after a fault at its Koeberg nuclear power station outside Cape Town. The latest blackouts, referred to locally as loadshedding, were triggered by breakdowns at a score of generating units, including at Koeberg nuclear plant in Cape Town. Eskom added in a statement on Twitter that the fault at Koeberg was ‘on the turbine side’ and that the nuclear reactor remained safe. Later, the 1Q20 business confidence indicators was released, which sank to a 21-year low. The survey pointed out that loadshedding by Eskom and the economic uncertainties brought about by the coronavirus significantly dented prospects for businesses.
Nigeria’s merchandise trade balance fell to a deficit of NGN 579.1bn (ca. USD 1.9bn) in 4Q19 from surpluses of NGN 1.4tn in 3Q19 and NGN 873.9bn in 4Q18. In a separate event, the Nigerian central bank released a statement, in which the monetary authority stated that ‘market fundamentals do not support a devaluation of Nigeria’s naira currency at this time.’ The central bank added that it ‘remains able and willing to meet all genuine demand for foreign exchange for legitimate transactions.’
As the country relies on crude oil sales, which make up around 90% of the country’s foreign exchange earnings, the central bank did its best to reassure market players that exchange rate stability can be sustained. However, recent asset price movements reflect investors’ scepticism.
Morocco’s economic growth is expected to be revised downwards to near 2% in 2020 from an initial forecast of 3.5% due to drought weighing on agricultural output and fewer tourists due to the coronavirus outbreak, according to the head of Morocco’s planning agency.
This week’s global market outlook is powered by Alquity www.alquity.com

Our Response to COVID-19