Equities fall as US inflation surges to 7%

Concerns about rising inflation and its impact on central bank policy continued to weigh on global equities last week.

In the US, the S&P 500 and the Dow lost 0.3% and 0.9%, respectively, as consumer prices rose at their fastest annual pace in almost 40 years. Disappointing fourth quarter earnings from major banks weighed on the financials sector, whereas energy stocks rallied as oil prices increased.

Weak investor sentiment was also evident in Asia, where the Nikkei 225 and Shanghai Composite shed 1.2% and 1.6%, respectively.

The FTSE 100 extended gains on Monday (17 January), rising 0.9% to 7,611. GlaxoSmithKline was among the top performers after it rejected a £50bn offer from Unilever for its consumer healthcare business, saying it “fundamentally undervalued” the business and its prospects. In economic news, figures from Rightmove showed the average price of property coming to market rose by 7.6% in January from a year ago – the highest annual rate since May 2016.

The Shanghai Composite gained 0.6% after figures showed the Chinese economy grew faster than expected in the final quarter of 2021, with GDP growth of 4.0% compared with a year earlier. In 2021 as a whole, GDP grew by 8.1%.

US markets were closed on Monday for Martin Luther King, Jr Day.

At the start of trading on Tuesday, the FTSE 100 was down 0.7% as investors digested the latest jobs data from the Office for National Statistics (ONS). The UK unemployment rate fell to 4.1% from 4.5% in the September to November period, while vacancies hit another record high as employers struggled to fill positions. Wage growth fell behind inflation in November, meaning real wages shrank for the first time since July 2020.

The closely watched US consumer price index (CPI), released last Wednesday, did little to calm fears about inflation and interest rates. The data from the Labor Department showed inflation rose by 7.0% year-on-year in December, marking the fastest annual pace since 1982. 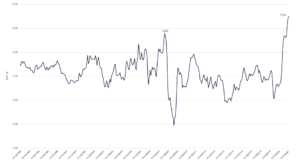 On a monthly basis, the CPI rose by 0.5% following a 0.8% gain in November. There were continued strong gains in rental accommodation and used car prices, and a smaller 0.5% rise in food prices. Gas prices declined by 0.5% after surging by 6.1% in both the previous two months.

Separate data showed inflation is having an impact on consumer sentiment. The University of Michigan’s preliminary index showed consumer sentiment slipped by 2.5% in early January from the previous month, and now stands at its second-lowest level in a decade. The top concern among respondents was inflation, and the percentage who said they were worse off financially than a year ago reached its highest since 2014.

The latest inflation reading has boosted expectations that the Federal Reserve will start increasing interest rates from March, with four or even five rate hikes this year.

In contrast to the US, inflation in China slowed more than expected in December, fuelling speculation that policymakers could loosen monetary policy further and cut interest rates. The CPI increased by an annualised 1.5%, down from 2.3% the previous month and lower than the 1.8% rise expected in a Reuters poll. Food prices fell by 1.2% year-on-year.

The producer price index, which hit a 26-year high in October, rose by 10.3%, down from 12.9% in November. This came after the government took measures to stabilise high raw material prices.

Here in the UK, data released last week showed the economy finally surpassed its pre-pandemic size in November, after growing by a bigger-than-expected 0.9% from the previous month. The economy was 0.7% larger than in February 2020, the month before the country went into its first lockdown, the ONS said. The UK economy shrank by more than 9% in 2020, one of the biggest slumps among the world’s richest nations. The ONS said services, production and construction output all increased in November. Services and construction are now 1.3% above pre-coronavirus levels, while production remains 2.6% below.

Many economists expect to see a fresh hit to GDP growth for December, when the spread of the Omicron variant resulted in Plan B measures being introduced and severe staff shortages. This could then hinder overall fourth quarter GDP growth. The ONS said GDP in the fourth quarter will either reach or surpass its pre-coronavirus level, provided the December 2021 estimate does not fall by more than 0.2% and there are no downward revisions to the October and November figures.

On Thursday, data showed there were record levels of staff absence around the turn of the year and a slump in restaurant bookings. Across the private sector, 2.7% of staff were absent in late December because of Covid symptoms or self-isolation, the highest since the ONS began collecting these figures. Meanwhile, 44% of businesses in the food and hotel sector saw an increase in cancellations in December, rising to 64% for businesses in the ‘other services’ category, which includes firms such as
beauty parlours.

Are We Heading Towards a Cashless Society?