Equities rally as US inflation starts to ease

Most major stock markets rose last week as data suggested the rise in US consumer prices may have peaked.

The S&P 500, Dow and Nasdaq surged 3.3%, 2.9% and 3.1%, respectively, as lower-than-projected inflation figures led to renewed optimism that the Federal Reserve will raise interest rates at a less aggressive pace.

Stocks in Europe rallied as industrial production in the eurozone rose by more than expected. Germany’s Dax added 1.6% and France’s CAC 40 gained 1.3%. The FTSE 100 climbed 0.8% as data showed UK gross domestic product (GDP) fell by less than feared in June.

Investor sentiment was also strong in Japan, where the Nikkei added 1.3%. The reshuffling of Japan’s Cabinet signalled policy continuity, with top figures retained in key posts. The Shanghai Composite advanced 1.6% on news China’s trade surplus rose to a new record of $101.3bn for the month July, surpassing the $100bn threshold for the first time ever.

*Data from close on Friday 5 August to close of business on Friday 12 August.

Stocks started this week in the green, with the FTSE 100 and S&P 500 edging up 0.1% and 0.4%, respectively, on Monday (15 August). Gains were held back by disappointing manufacturing and retail sales data from China. Industrial production rose 3.8% year-on-year in July, below the 3.9% expansion in June and a 4.6% increase forecast by analysts in a Reuters poll. Retail sales rose 2.7% year-on-year, below the 3.1% growth in June and forecasts for 5.0% growth. China’s central bank responded by lowering interest rates on key lending facilities for the second time this year.

The FTSE 100 rose 0.4% at the start of trading on Tuesday as investors digested the latest UK jobs data. According to the Office for National Statistics (ONS), the real value of workers’ pay dropped by 3.0% in the three months to June, the fastest rate since comparable records began in 2001, as wage increases were outstripped by inflation. Unemployment rose by 0.1 percentage points to 3.8% and the number of new job openings fell for the first time since summer 2020.

Figures released last week raised hopes that inflation in the US has peaked and started to decelerate. On a monthly basis, the US consumer price index (CPI) was unchanged in July as a fall in gasoline prices offset increases in shelter and food. Food prices rose by 1.1% over the month, whereas gasoline prices declined by 7.7%.

On annual basis, CPI eased to 8.5% in July from 9.1% in June, below economists’ expectations of 8.7%. Core CPI – which excludes volatile food and energy prices – was unchanged at 5.9% year-on-year. 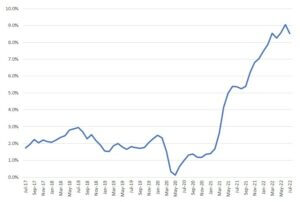 Nevertheless, San Francisco Federal Reserve Bank president Mary Daly said it was too early for the US central bank to declare victory in its fight against inflation. In an interview with the Financial Times, she did not rule out a third consecutive 0.75 percentage point rate rise at the next policy meeting in September, although she signalled support for the Fed to slow the pace of its interest rate increases.

“There’s good news on the month-to-month data that consumers and business are getting some relief, but inflation remains far too high and not near our price stability goal,” she stated.

Here in the UK, figures from the ONS showed the UK economy contracted by 0.1% in the second quarter, led by a large reduction in coronavirus activities, such as NHS Test and Trace and lateral flow orders. Real household expenditure also declined by 0.2%, driven by falls in net tourism, clothing and footwear, food and non-alcoholic beverages, and restaurants and hotels.

The decline in GDP was sharper at the end of the quarter, falling by 0.6% in June. However, this was better than the 1.3% contraction forecast by economists and partly reflected the fact that June saw two fewer working days as a result of the Queen’s Platinum Jubilee.

The Bank of England has forecast that the UK will enter into a recession in the fourth quarter of this year, with output falling in each quarter until the end of 2023.

Industrial production in the eurozone rose by 0.7% in June from the previous month, following an upwardly revised 2.1% increase in May. This was well above consensus expectations for a 0.2% rise. On an annual basis, production expanded by 2.4%, above the 0.8% increase expected by economists. The rise was driven by an expansion in capital goods and energy output, which more than offset declines in consumer goods output, according to Eurostat.

Elsewhere, however, it was reported that droughts in Europe were hindering energy production, agriculture and river transport. According to Sky News, water levels in reservoirs for hydropower are down in nine countries, including Italy, Serbia, Montenegro and Norway. Water levels in Germany’s Rhine River fell to a new low on Friday, further restricting the distribution of coal, petrol, wheat and other commodities.