Stocks rise as US inflation eases

Signs of easing US inflation also boosted stocks in Europe and Asia, with Germany’s Dax and Japan’s Nikkei 225 advancing 5.7% and 3.9%, respectively. China’s Shanghai Composite added 0.5%, with gains held back by the first decline in Chinese exports for two years.

The FTSE 100 was the weakest performer among the major indices, declining 0.2% on the back of disappointing UK gross domestic product (GDP) numbers.

* Data from close on Friday 4 November to close of business on Friday 11 November.

Investors look ahead to autumn statement

The FTSE 100 started this week in the green, rising 0.9% on Monday (14 November) as investors looked ahead to UK chancellor Jeremy Hunt’s autumn statement on Thursday. Hunt is expected to announce a range of tax increases and spending cuts to help plug a hole in the public finances. In economic news, data from Rightmove showed the average UK house price declined by 1.1% in November following a 0.9% increase the previous month.

US stocks fell on Monday following reports that e-commerce giant Amazon is considering laying off 10,000 employees – roughly 1% of its global workforce. The S&P 500 slipped 0.9% and the tech-heavy Nasdaq lost 1.1%.

The FTSE 100 was up 0.2% at the start of trading on Tuesday, as investors digested the latest labour market data from the Office for National Statistics (ONS). The unemployment rate was an estimated 3.6% in July to September, 0.2 percentage points lower than the previous three-month period and 0.4 percentage points below pre-pandemic levels.

US inflation lower than expected

Last week’s economic headlines were dominated by the surprise drop in US inflation. The headline CPI rose by 7.7% year-on-year in October – the slowest rate since January and below the 8.0% figure expected by economists. On a monthly basis, the CPI rose 0.4%, below expectations of around 0.6%. 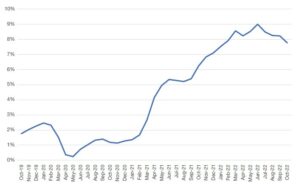 Even more encouraging was an easing in core inflation, which strips out food and energy prices. This fell back to an annual rate of 6.3% from a 40-year high of 6.6% in September. Shelter was the dominant factor driving core CPI, rising by 0.8% month-on-month in October – the biggest increase in over 32 years. When food, energy and shelter are stripped out, the CPI declined by 0.1% from the previous month.

Following the release of the data, several Federal Reserve officials appeared to signal their support for a slower pace of interest rate hikes. Patrick Harker, president of the Philadelphia Fed, was quoted in the Financial Times as saying: “In the upcoming months, in light of the cumulative tightening we have achieved, I expect we will slow the pace of our rate hikes as we approach a sufficiently restrictive stance.” And Lorie Logan, president of the Dallas Fed, said: “While I believe it may soon be appropriate to slow the pace of rate increases so we can better assess how financial and economic conditions are evolving, I also believe a slower pace should not be taken to represent easier policy.”

On a less positive note, a report on Friday showed US consumer sentiment fell in November to its lowest level since July. The University of Michigan’s preliminary reading dropped to 54.7 from 59.9 the previous month. Economists polled by Reuters had forecast a reading of 59.5. One-year inflation expectations edged up to 5.1% from 5.0% in October, while buying conditions for durable goods fell 21% due to high interest rates and continued high prices.

“Instability in sentiment is likely to continue, a reflection of uncertainty over both global factors and the eventual outcomes of the election,” said survey director Joanne Hsu.

Here in the UK, figures released on Friday showed UK GDP shrank by 0.2% in the third quarter, marking the first quarterly decline since the start of 2021. Output slowed in services, production and construction, while real household expenditure declined by 0.5% as prices soared. GDP in September alone fell by 0.6%, although the ONS noted that data for the month was affected by the bank holiday for the state funeral of HM Queen Elizabeth II. Regardless, it leaves the UK economy, unlike its developed European peers, smaller than it was before the pandemic.

The data came a week after the Bank of England warned the UK was heading for its longest recession since records began a century ago. GDP is expected to continue falling through 2023 and into the first half of 2024.

Chancellor Jeremy Hunt said he would try to make any recession “shallower and quicker” than predicted, adding that there is “a tough road ahead”.

The eurozone and most EU countries are also heading for an imminent recession, according to the European Commission. EU economy commissioner Paolo Gentiloni said at a press conference that the economic situation had “deteriorated markedly” and the eurozone was heading into two consecutive quarters of contraction – the technical definition of a recession.

The commission said that while GDP growth in the EU is likely to be better than expected this year – at 3.3% rather than 2.7% – a weaker external environment and tighter financing conditions are expected to tip the EU, the euro area and most member states into a recession in the last quarter of the year. “As inflation keeps cutting into households’ disposable incomes, the contraction of economic activity is set to continue in the first quarter of 2023,” the commission added. “Growth is expected to return to Europe in spring, as inflation gradually relaxes its grip on the economy.”

Buy Now, Pay Later (BNPL): What Is It and Should You Use It?