In the US, the Nasdaq moved into bear market territory, falling to a level that was more than 20% below its recent peak. The S&P 500 remained in correction territory at roughly 14% below its recent high. For the week, the indices were down 3.5% and 2.9%, respectively. It came after President Joe Biden said the US was banning imports of Russian oil and gas, and that Americans should be prepared for higher gas prices.

In contrast, stock markets in Europe rebounded as Russian President Vladimir Putin said there had been “certain positive shifts” in talks with Ukrainian negotiators. The pan-European STOXX 600 rose 2.2%, Germany’s Dax added 4.1% and the UK’s FTSE 100 gained 2.4%.

UK and European stocks started this week in the green on hopes of a breakthrough in talks between Russia and Ukraine. The STOXX 600 and Germany’s Dax added 1.2% and 2.2%, respectively, on Monday (14 March) despite Russia continuing to shell several cities in Ukraine.

The FTSE 100 gained 0.6% as sharp falls in oil prices helped to alleviate fears about inflation.

A fresh Covid-19 outbreak in China weighed on stocks in Asia, with the Shanghai Composite and Hang Seng losing 2.6% and 5.0%, respectively. The outbreak is said to be China’s worst since early 2020.

US stocks also put in weak performance on Monday. The Dow was flat and the S&P 500 slipped 0.7%. Investors are preparing themselves for an interest rate hike when the Federal Reserve meets this week.

The FTSE 100 was down 1.5% at the start of trading on Tuesday, as figures from the Office for National Statistics (ONS) showed that while UK unemployment fell in the three months to January, regular pay (excluding bonuses) declined by 1% year-on-year in real terms, the largest fall
since 2014.

US inflation at highest level in 40 years

Last week saw the release of the latest US inflation figures, which revealed the consumer price index (CPI) soared by 7.9% year-on-year in February, the highest since January 1982. On a monthly basis, prices rose by 0.8%. The gains were driven by rising costs for energy, food and shelter. 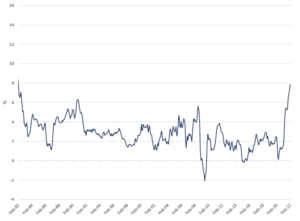 Inflation worries meant the University of Michigan’s preliminary gauge of consumer sentiment for March fell to 59.7. This was the lowest reading since September 2011 and worse than the 61.4 reading forecast by economists in a Reuters poll. According to the report, 24% of respondents “spontaneously mentioned the Ukraine invasion in response to questions about the economic outlook.” The gauge of current economic conditions slipped to 67.8 from 68.2 in February, and the measure of consumer expectations declined to 54.4 from 59.4.

ECB to scale back asset purchases

The European Central Bank (ECB) surprised investors by announcing it could end its asset purchasing programme in the third quarter, rather than at the end of the year. The ECB said Russia’s invasion of Ukraine was a “watershed for Europe” and that it would take whatever action is needed “to pursue price stability and to safeguard financial stability”.  Inflation in the eurozone is expected to reach 5.1% by the end of this year, up from the ECB’s previous forecast of 3.2%.

However, the central bank dropped its commitment to end asset purchases shortly before raising interest rates. Instead, it said any changes to rates would be gradual and come “some time” after asset purchases end.

The ECB also cut its growth forecasts for the eurozone to 3.7% in 2022 and 2.8% in 2023, down from 4.2% and 2.9% previously. Christine Lagarde, president of the ECB, said the risks to the economic outlook “have increased substantially due to the invasion” and that the war “could worsen supply side constraints again”.

Here in the UK, figures released by the ONS showed the economy bounced back in January after the hit from Omicron at the end of last year. Gross domestic product (GDP) grew by 0.8% month-on-month, following a 0.2% decline in December. This was ahead of economists’ expectations of 0.2% growth. Services output grew by 0.8% following a 0.5% fall in December, and is now 1.3% above its pre-pandemic level. Production expanded by 0.7% and construction by 1.1%.

However, there are concerns that soaring inflation could squeeze household finances and compound the already weak outlook for UK economic growth over the medium term. The Bank of England is widely expected to raise interest rates this week to try to offset inflationary pressures.