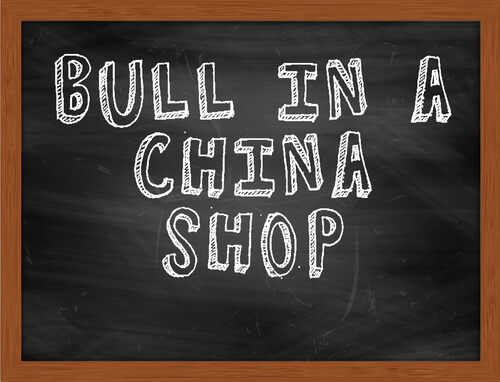 BULL IN A CHINA SHOP
This week, overall global growth momentum has continued to float almost all boats. Nonetheless, there is still notable political risk. For example:

On Tuesday, Trump broke the market from its summer slumber by stating the US would “deploy fire and fury like the world has never seen” if North Korea did not give up its nuclear programme. Two days later, he added that he “may not have been tough enough”. North Korea responded by announcing it was planning to target the waters surrounding the US territory of Guam with 4 missiles by “mid-August”. The US’ top military official (Chairman of the Joint Chiefs of Staff General Joseph. Dunford) is scheduled to meet with the leaders of US Forces Korea and the South Korean President Moon Jae-in later today.
Trump also set his sights on Venezuela, commenting, “The people are suffering and they are dying. We have many options for Venezuela including a possible military option if necessary.” 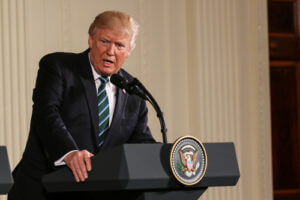 UNITED STATES
S&P 2,441 -1.43%, 10yr Treasury 2.22% -7.32bps, HY Credit Index 344 +22bps, Vix 13.34 +5.48Vol
Before President Trump unleashed his tirade against North Korea, US markets set a new all-time record for low volatility. For 15 consecutive days, the daily move on the S&P 500 was less than 0.3% in absolute terms. However, on Thursday, the market dropped 1.45%, leading to a surge in the VIX from below 10% to over 15.50% (it’s highest closing price since last year’s election and with the highest daily volume in VIX options ever). Actually, the action was confined to Thursday, with the S&P 500 eking out a 0.13% gain on Friday. Interestingly, small cap stocks fared worse and the Russell 2000 index is now barely holding on to gains for the year.
At the sector level, the continued dominance of online retail over its traditional cousin was again in evidence. Macy’s and Kohl’s both released results on Thursday revealing a loss of market share, with same-store sales down 2.8% at Macy’s and 0.4% at Kohl’s. Their shares were both down in the order of 10% on the week.
In terms of economic data, both the PPI and CPI measures of inflation came in lower than expected. The FED July meeting minutes are released next week and could shed further light on the timing of reduced QE re-investment.

EUROPE
Eurostoxx 3,438 -2.33%, German Bund 0.43% -8.60bps, Xover Credit Index 245 -18bps, EURUSD 1.180 -0.41%
European equity markets unperformed and government bonds rallied. It has been a case of “buy the rumour, sell the fact” for Europe as, despite strong economic data and fund flows, the region’s stock markets have struggled since the French election. The export heavy DAX is trading at the lowest levels since April on the back of Euro strength.
Next week, the focus will be on the minutes of the July ECB meeting, in particular on discussion related to the recalibration of monetary policy in the Autumn.

China’s CPI inflation rate came down slightly month on month, from 1.5% YOY in June to 1.4% YOY in July. PPI inflation, considered one of the more representative indicators of the true health of the Chinese economy, remained unchanged at the healthy level of 5.5% YOY for the third consecutive month.
China’s external data, however, weakened, with export growth falling from 11.3% YOY in June to 7.2% in July, on account of weakness in demand from the US and EU. Import growth stayed in double digits (11.0% YOY vs 17.2% in June) whilst the trade balance grew slightly month on month (US$46.7bn vs. US$42.8bn).
India’s Industrial Production Index contracted for the first time in four years in June, with GST related uncertainty and de-stocking the key driver. The June IIP reading came in at -0.1% YOY, which dragged the quarterly average for March to June to 2.0% YOY. This is sequentially slower than the 2.7% growth of the previous quarter and significantly weaker than the corresponding quarter last year which saw a 7.1% YOY growth rate.
Indonesia’s GDP growth remained buoyant at 5.0% YOY in Q2. This was a slight moderation from the 5.1% YOY growth rate recorded in Q1, but still painted a picture of a robust economy. Government capital spending and private consumption were the largest contributors. External trade was a negative contributor, with both imports and exports deteriorating.
Hong Kong’s Q2 GDP growth rate came in ahead of expectations at 3.8% YOY. A favourable base effect and strong consumption were key contributors.
Led by new governor Nestor Espenilla for the first time, the Philippines central bank kept interest rates on hold at 3.0%, in line with expectations. The new governor’s statements were broadly dovish, with Espenilla commenting ““while inflation forecasts have risen slightly due to the recent increase in global oil prices, the future inflation path continues to be within the target for 2017 to 2019”.

LATIN AMERICA
MSCI Lat Am 2,755 -0.85%
The disinflationary trend across all Latin America (ex-Mexico) was confirmed in the latest batch of data, paving the way for further rate cuts:

Only Mexico stood out with headline inflation creeping higher to 6.44% YOY (from 6.31% in June), while core inflation reached 4.94% (from 4.83%) during the same period. Mexico’s central bank kept the reference interest rate unchanged at 7.0%.
Brazil’s labour market created net 36K jobs in July, according to the Labour Ministry’s CAGED survey on formal employment. The labour market created a net 71K jobs in 7M17, compared to a net loss of 644K jobs in 7M16, clearly indicating a recovery that is also reflected in the stabilisation of the unemployment rate in the last few months (just enough to compensate for the growing working-age population). The gradual improvement in labour market conditions is paving the way for consumption to slowly pick up and suggests faster GDP growth.
The US position on Venezuela is still unclear after a visit by US Vice-President Pence to Colombia. While Venezuela is every day closer to civil war and dictatorship, the range of options considered by the White House go from “military action” (according to President Trump) to the “search for a peaceful solution” (VP Pence). Meeting with VP Pence, Colombia’s president Santos warned “a military intervention would be unacceptable to all countries in Latin America”.
The US imposed financial sanctions against 30 top officials including Maduro and barred them from travelling to the US. VP Pence didn’t reject the idea of increasing sanctions by imposing an embargo on Venezuela’s crude oil, something that would precipitate Venezuela into the abyss. As the security situation is deteriorating quite quickly, foreign oil companies like Statoil, Eni, Chevron, Total or Repsol could stop lifting crude for PDVSA, although operations were not disrupted last week.

AFRICA
MSCI Africa 860 -0.61%
South African President Jacob Zuma won a motion of no-confidence, surviving the 8th attempt to remove him from power since he became president in 2009. The opposition-sponsored motion which was held as a secret ballot and would have forced the resignation of the president and his entire cabinet, failed to garner enough votes in parliament; 177 in favor (including more than 20 ANC members of parliament), 198 against, 9 abstentions.
Reaction to the outcome was mixed; the rand fell more than 1% to R13.34 against the dollar within minutes of the result, on the streets some saw the 20+ ANC MP vote for the motion as significantly weakening the president while others saw the win reinforcing Zuma’s mandate ahead of the ANC elective conference in December where he will look to secure a successor that is amenable to his course.
Staying in South Africa, unemployment remained unchanged at 27.7% in 2Q 2017, a 14-year high. The largest decreases were recorded in the formal sector; Construction (110k) and Agriculture (40k), and gains in the informal sector where trade recorded a 50k gain in employment. YOY, the embattled mining sector was the only industry to record a decline, down by 13k from Q2 2016.
In Egypt, there were positive data and further developments on the reform agenda:

These are positive signs for the Egyptian economy. However, high inflation remains a concern; CPI increased to 33% YOY in July from 29.8% while core inflation rose to 35.26% from 31.95% in June..
Uhura Kenyatta, the incumbent who is considered more market friendly, was declared the winner of the Kenyan presidential election, winning 54% of the vote. The opposition party led by Raila Odinga has however disputed results.