US indices ended their three-week losing streak after a report by the Federal Reserve showed price increases were moderating in nine of its 12 districts, led by lower fuel prices and cooling overall demand. The S&P 500 ended its four-day trading week up 3.7%, the Dow gained 2.7% and the Nasdaq advanced 4.1%.

The FTSE 100 and the Dax added 1.0% and 0.3%, respectively, as the UK and Germany announced measures to help households and businesses with soaring energy costs.

Following the death of Her Majesty Queen Elizabeth II, the Bank of England said it would postpone its interest rate decision by one week. The Queen’s funeral will take place on 19 September and UK markets will close for the day.

*Data from close on Friday 2 September to close of business on Friday 9 September.

UK and European stocks rose on Monday (12 September) as a positive analyst note boosted retailers and higher metals prices lifted miners. The gains came despite the ifo Institute cutting its forecast for Germany’s economic output in 2023 from 3.7% to -0.3% and weaker-than-expected UK gross domestic product (GDP) figures. According to the Office for National Statistics (ONS), UK GDP grew by 0.2% in July – better than the 0.6% drop in June, when an additional bank holiday led to a decline in activity, but below the 0.4% growth forecast by economists.

Wall Street stocks were also in the green on Monday as investors awaited the Labor Department’s consumer price index (CPI), due to be released today. The report was expected to show a slight easing in inflation.

The FTSE 100 was flat at the start of trading on Tuesday. Figures from the ONS showed the UK unemployment rate fell to 3.6% in the three months to July, the lowest level since 1974. Total pay including bonuses was up 5.5% from a year ago, but after adjusting for inflation was 2.6% lower.

Figures released by China’s National Bureau of Statistics last week showed the impact that Covid-19 containment measures and property market weakness are having on domestic demand in China. Consumer prices rose by just 2.5% year-on-year in August, down from 2.7% in July and below the 2.8% rise forecast by analysts in a Reuters poll. The producer price index eased from 4.2% to 2.3%, the slowest pace since February 2021, due to falling energy and raw materials prices.

The data helped to spark a stock market rally at the end of last week as commentators suggested there could be room for further monetary policy easing. It comes after the People’s Bank of China announced a cut in the foreign exchange requirement ratio for banks from 8% to 6%, a measure that aims to halt the decline in the yuan.

The European Central Bank (ECB) increased its key interest rates by a record 0.75 percentage points last week in an attempt to rein in inflation. The deposit rate is now 0.75% and the refinancing rate is 1.25%, the highest levels since 2011. 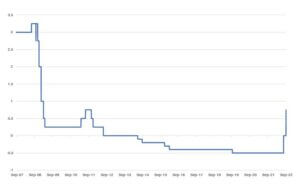 The ECB said the move would “ensure the timely return of inflation to the ECB’s 2% medium-term target”. It added that it expects further rate hikes over the next several meetings “to dampen demand and guard against the risk of a persistent upward shift in inflation expectations”.

According to Eurostat’s flash estimate, inflation reached 9.1% year-on-year in August. Soaring energy and food prices, supply bottlenecks and demand pressures from the reopening of the economy are still driving up inflation. The ECB said inflation is now expected to average 8.1% in 2022 and 5.5% in 2023, while the economy is expected to grow by 3.1% in 2022 and only 0.9% in 2023. “Very high energy prices are reducing the purchasing power of people’s incomes and, although supply bottlenecks are easing, they are still constraining economic activity,” the Bank said.

Mixed data on US services sector

Last week saw two divergent sets of data on the US services sector. The Institute of Supply Management’s (ISM) gauge rose to 56.9 in August, the fastest pace of expansion since April, whereas S&P Global’s indicator declined to 43.7, the biggest contraction since early 2020. (The 50.0 mark separates growth from contraction.)

In an explanatory note, S&P Global said the most striking difference between the surveys is sector coverage. S&P Global includes data provided by companies operating in the US services economy, whereas ISM covers any activity other than manufacturing and so includes things like construction and utilities. The ISM data also tends to be more biased towards larger companies.

Why Digital Only Banking is the Future