In the US, the technology-heavy Nasdaq ended the week 2.2% lower and remained in correction territory, down 15% from its recent peak. The S&P 500 declined 1.8% after the latest inflation data showed US consumer prices surged in January to their highest level since 1982.

In China, the Shanghai Composite surged 3.0% after economists said the worst of the country’s regulatory crackdown was over.

Stocks started this week in the red as tensions grew between Russia and Ukraine. The FTSE 100 tumbled 1.7% on Monday (14 February) with travel stocks worst hit.

The STOXX 600 fell 1.8% and Germany’s Dax lost 2.0%. Oil prices hit their highest levels in more than seven years amid concerns an invasion of Ukraine could disrupt supplies and spark retaliatory sanctions on Russia.

US shares dropped sharply on news the US is closing its embassy in Kyiv and moving diplomats to Western Ukraine. The S&P 500 managed to largely recover from the sharp selloff and ended Monday 0.4% lower, with energy stocks suffering the largest falls.

The FTSE 100 was up 0.8% at the start of trading on Tuesday, as investors digested the latest labour market data from the Office for National Statistics. Unemployment fell slightly to 4.1% in the fourth quarter of 2021 from 4.3% in the third quarter, while inflation-adjusted regular pay (excluding bonuses) fell by 0.8% year-on-year.

Soaring demand and lack of supply pushed US inflation to its highest level in 40 years in January. Consumer prices rose by 7.5% from a year earlier, and by a bigger-than-expected 0.6% from the previous month, according to the Bureau of Labor Statistics. 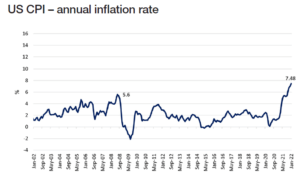 Price rises for food, electricity and shelter were the largest contributors to the increase. Food prices rose by 0.9% month-on month in January, following a 0.5% rise in December. Energy prices also rose by 0.9% in January. Core inflation, which strips out food and fuel, rose by 6.0% on an annual basis, driven by a 40.5% surge in the prices of used cars.

Concerns about inflation were evident in the University of Michigan’s preliminary gauge of consumer sentiment, which fell to its lowest level in more than a decade in early February. The index dropped to 61.7 from a final reading of 67.2 in January.

Richard Curtin, chief economist for the University of Michigan’s surveys of consumers, said the declines were driven by weakening personal financial prospects, with higher inflation spontaneously cited by one-third of all consumers. Nearly half expected declines in their inflation-adjusted incomes during the year ahead.

UK gross domestic product (GDP) grew by a better-than-expected 1.0% in the final quarter of 2021 as the hit from Omicron proved to be smaller than feared. GDP slipped by 0.2% in December, after growing by 0.7% the month before, as people worked from home and avoided Christmas socialising, according to the Office for National Statistics. This was better than the 0.6% contraction expected in a Reuters poll.

For 2021 as a whole, GDP grew by 7.5%, marking the biggest annual rise since 1941 and rebounding from the 9.4% plunge in 2020. However, economists are predicting slower growth in 2022 as rising inflation and soaring energy prices put further strain on households. The Bank of England recently cut its GDP growth forecast for 2022 to 3.75% from 5.0%.

The European Commission also lowered its outlook for economic growth in the eurozone to 4.0% in 2022 and 2.7% in 2023, down from 4.3% and 2.4% previously. European economic commissioner Paolo Gentiloni said multiple headwinds had chilled Europe’s economy this winter, including Omicron, soaring energy prices, and persistent supply chain disruptions. “With these headwinds expected to fade progressively, we project growth to pick up speed again already this spring,” he added.

Inflation is expected to reach 3.5% this year, higher than the European Commission’s November forecast of 2.2% and well above the European Central Bank’s 2.0% target. Next year, inflation is forecast to ease to 1.7%.

“Price pressures are likely to remain strong until the summer, after which inflation is projected to decline as growth in energy prices moderates and supply bottlenecks ease. However, uncertainty and risks remain high,” Gentiloni said.

Activity in China’s services sector grew at the slowest pace in five months in January as the government introduced measures to contain localised cases of Covid-19. The Caixin / Markit services purchasing managers’ index fell from 53.1 in December to 51.4 in January – the lowest since August, although still above the 50-point mark that separates growth from contraction. Input costs rose at a sharper rate in January from the previous month, and confidence about the year ahead slipped to a 16-month low.
The data has increased expectations that China’s policymakers will introduce further support for the economy this year, rather than moving towards the more hawkish stance adopted by central banks in the West.

5 New Years Resolutions to Boost Your Financial Health in 2022