In the week, the Nasdaq lost 3.86% with the S&P 500 also slipping 1.27% – though the latter was able to recover some of its midweek losses due to consumer staples and tech names which held up.

Across the Atlantic, the picture was more mixed in the UK and Europe. Over the week, the pan-European STOXX Europe 600 index rose 0.57%, with concerns over inflation and the ongoing Ukraine conflict continuing to suppress sentiment. On a country-specific basis, several markets recorded losses – such as the French CAC 40 index, which fell 2.04% due to political uncertainty. The FTSE 100 rose 1.75%, though the more domestic-focused FTSE 250 index better reflected inflationary concerns in the country, falling 0.52%.

In Asia, the Nikkei 225 fell 2.46% with Japan also being impacted by inflationary concerns and US Federal Reserve movements. In China, markets fell as well, with the Shanghai Composite Index slipping 0.94%. Lingering Covid-19 lockdowns across several cities partly caused these falls, as well as investors taking note of monetary policy and inflationary trends around the world.

Stocks started the week in the red, with investors around the world starting to price in expected rate hikes from central banks as well as more negative inflation news in the US. By the time markets closed in the US, the S&P 500 and Nasdaq were down 1.69% and 2.18% respectively.

The most notable economic news came from the UK, where growth has stalled. In February, economic growth slowed to just 0.1% which was dragged down by sluggish numbers in production and construction. This was down from the 0.8% GDP growth seen in January. This impacted investor sentiment, causing the FTSE 100 to lose 0.67% by close on Monday, with the FTSE 250 losing 0.28%.

The picture was the same in European and Asian markets. The pan-European Stoxx 600 index closed 0.59% lower, with nearly all regional markets lower as disappointing UK GDP figures were digested. In Asia, the Nikkei closed at 0.61% lower while the Shanghai Composite fell 2.61%.

Last week, the Federal Reserve published the minutes from its monthly Federal Open Market Committee (FOMC) meeting, which revealed how policymakers are planning to reduce the central bank’s balance sheet.

The plan is to reduce the balance sheet by $95bn a month, with officials also preparing to raise rates by 0.50% in May.

FOMC members are focusing on quelling inflation, which hit a 40-year high in March, when US CPI reached 7.9%. Policymakers will feel more confident in raising rates after improving employment statistics were revealed last week. According to the US Bureau of Labor, the US added 431,000 jobs in March, which reduced the country’s unemployment rate from 3.8% to 3.6%. Within this data, the weekly jobless claims tally fell to 166,000, which is the lowest since 1968. 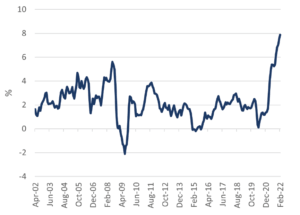 This pushed bond yields higher in the week. By Friday, the US 10-year yield closed the week at 2.7% which is the highest level in three years.

Last week the European Central Bank (ECB) also published minutes of its own meeting in March, ahead of its crucial meeting on Thursday. Policymakers were revealed to be divided, but overall were more hawkish, with many calling for rate hikes to prevent a wage-price spiral.

Though policymakers were split in how to proceed, with some preferring to see how the Russia-Ukraine conflict continues to unfold, inflation has risen since the ECB’s last meeting. Annual inflation in the eurozone is currently 7.5%, a record for the region.

Last week, the EU also imposed more sanctions on Russia off the back of reports of war crimes in Ukraine. These included a proposal to ban imports of Russian coal, and the assets of more Russian oligarchs to be targeted.

French President Emmanuel Macron will now face far-right candidate Marine Le Pen in presidential elections, after they both made it through the first round. With 27% and 23% of the vote secured respectively, the race between the two looks tight before voters return to the polls on 24 April.

A few weeks ago, many commentators expected Macron to comfortably secure a second term. However, Le Pen’s early success has now made some investors wary about a potential change of political leadership in the country.

The prospect of a Le Pen presidency has caused concern among some investors, as she has shown sympathies for Russian President Vladimir Putin in the past and been openly sceptical about the European Union. Over the week, the CAC 40 index fell 2.04% in light of these political developments, with French bonds also sliding with 10-year yields hitting their highest peak since 2015.

Last week, the International Monetary Fund (IMF) downgraded its forecast for Japanese growth this year, from 3.3% to 2.4%. Uncertainty stemming from Russia’s war with Ukraine was cited as one of the main reasons, with Japan vulnerable to shocks across supply chains, trade networks and commodities.

Japan’s close trade-ties with China were also cited as a risk, with the latter coming under international scrutiny for failing to publicly criticise Russia over its actions in Ukraine. US government spokesmen recently stated if China was found to be supporting Russia, Beijing would also become the target of economic sanctions.

How to Stay Ahead Financially in Hard Times

Why Personal Financial Education is So Important