The pan-European STOXX 600 slid 4.6% and Germany’s Dax fell 3.0%, with lockdowns in China and the war in Ukraine adding to the uncertainty. The UK’s FTSE 100 lost 2.1% as the Bank of England warned inflation could reach around 10% later this year.

In the US, stocks suffered their fifth consecutive week of losses, briefly pushing the Dow into correction territory. The Federal Reserve’s announcement of a 50-basis-point hike in interest rates boosted markets on Wednesday, but they soon resumed their downward trajectory as inflation data led to concerns that steeper increases could be on the horizon. The Dow ended the week 0.3% lower, while the Nasdaq slumped 1.5%.

Over in China, the Shanghai Composite ended its holiday-shortened trading week down 1.5% as data showed the government’s zero-Covid policy had hit domestic consumption and manufacturing production.

In the US, the S&P 500 and the Nasdaq declined 3.2% and 4.3%, respectively, as shares in several big technology companies fell on concerns about rising interest rates and slower economic growth.

The FTSE 100 started Tuesday’s trading session on a more positive note, ahead of the Queen’s Speech in which the government was expected to unveil plans to boost UK economic growth.

The Bank of England (BoE) warned last week that inflation in the UK is likely to keep rising to around 10% this year. The Bank said Russia’s invasion of Ukraine had led to large increases in the price of energy and food, while lockdowns in China were making it harder to import some goods to the UK. In addition, low unemployment and a strong labour market are leading to an increase in wages, thereby pushing up the price of services.

“It is hard to predict the future, but we think [inflation is] likely to reach around 10% this year and go down next year. We expect it to be close to 2% in around two years,” the BoE said in a statement.

The warning came as the BoE’s monetary policy committee voted to increase the base interest rate by 25 basis points to 1.0%, the highest level since 2009. 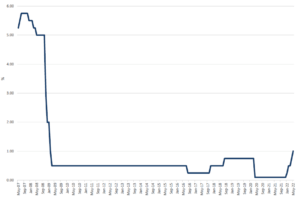 In the meeting minutes, the committee said Russia’s invasion of Ukraine had led to a “material deterioration” in the outlook for UK and world growth. Interest rates are expected to rise to 2.5% by mid-2023 before falling to 2.0%.

Over in the US, the Federal Reserve announced the biggest interest rate rise in 22 years. Policymakers voted to increase the federal funds target rate by 50 basis points to try to tackle soaring inflation.

There were growing expectations that the Fed would lift rates by 75 basis points at next month’s meeting, but Fed chair Jerome Powell said in the post-meeting press conference that this was not being actively considered. “There’s a broad sense that an additional 50 basis points should be on the table at the next couple of meetings,” he added.

These comments, however, failed to placate investors, particularly as data from the Labor Department showed higher-than-expected wage pressures. Nonfarm unit labour costs soared by 11.6% in the first quarter, well above forecasts of a 9.9% rise. The increase was largely due to a 7.5% drop in worker productivity – the biggest quarterly fall in almost 75 years.

Data from China last week laid bare the impact of ongoing Covid-19 lockdowns on the country’s economy. Activity in the service sector shrank in April at the second-steepest rate on record. The Caixin service purchasing managers’ index (PMI) fell from 42.0 in March to 36.2 in April, well below the 50-point mark that separates growth from contraction. The composite PMI, which includes service and manufacturing activity, dropped to 37.2 from 43.0 as lockdowns curbed production and disrupted supply chains.

Elsewhere, the Ministry of Culture and Tourism said Chinese travellers spent 43% less over the five-day Labour Day holiday (30 April to 4 May) than a year earlier. The holiday is traditionally one of China’s biggest tourist seasons. Popular domestic destinations all reported large falls in visitor numbers.