Most major stock markets finished their first week of 2023 in the green as data suggested inflation was cooling in both the US and Europe.

The S&P 500 and the Nasdaq ended their four-day trading week up 1.5% and 1.0%, respectively, after Friday’s nonfarm payroll report raised hopes the Federal Reserve could engineer a ‘soft landing’ for the US economy – i.e. slowing inflation without sparking a significant recession.

The pan-European STOXX 600 and Germany’s Dax surged 4.6% and 4.9%, respectively, as inflation in the eurozone fell below 10% for the first time in two months.

In Asia, the Hang Seng surged 6.1% and the Shanghai Composite added 2.2% on news that Hong Kong was considering reopening its border with mainland China after three years of coronavirus restrictions.

Stocks extended gains on Monday (9 January) after Hong Kong and China resumed quarantine-free travel over the weekend. It is hoped the reopening will provide a much-needed boost for Hong Kong’s economy, which is projected to have shrunk by 3.2% in 2022, according to reports in the Financial Times. The Hang Seng gained 1.9% on Monday while the Shanghai Composite added 0.6%. The positive sentiment spread to Europe, where the FTSE 100 climbed to its highest level since August 2018. In contrast, US indices slipped into the red as investors looked ahead to this week’s inflation data and earnings reports from major banks.

The release of the official nonfarm payrolls report last Friday showed US jobs growth slowed for a fifth consecutive month in December. This fuelled optimism among some commentators that the Federal Reserve will be able to slow its pace of interest rates hikes and, in turn, avoid sparking a severe recession.

According to the Bureau of Labor Statistics, 223,000 jobs were added in the final month of 2022. This was above consensus expectations, but less than the 256,000 jobs added in November.

New US jobs per month (thousands) 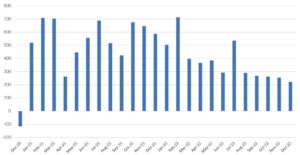 Average hourly earnings growth slowed to 0.3% month-on-month, and November’s wage growth was revised down from 0.6% to 0.4% month-on-month, easing concerns about wage inflation. Nevertheless, the average wage gain over the past two months has amounted to 0.35%, which is slightly higher than what would be considered consistent with the Federal Reserve hitting its 2% inflation target. The unemployment rate also dropped back to its cycle low of 3.5%, while the job openings to unemployed ratio remained very high.

Separate data released on Friday showed services and manufacturing activity in the US fell in December, but so did price pressures. The Institute for Supply Management’s (ISM) services index dropped to 49.6, putting it into contraction territory (below 50.0) for the first time since May 2020. Excluding the Covid-19 pandemic slump, this was the weakest reading since late 2009. Prices paid continued to increase but at their slowest pace since January 2021.

Meanwhile, manufacturing activity contracted for the second month in a row, falling to 48.4 in December from 49.0 in November. Prices paid by manufacturers dropped sharply to their lowest level since February 2016, excluding the early pandemic plunge.

Last week also brought encouraging signs of easing inflation in the eurozone. Lower energy prices helped the annual inflation rate fall to 9.2% in December from 10.1% in November, according to Eurostat’s flash index. However, core inflation, which excludes volatile food and energy prices, rose to a new high of 5.2% year-on-year, exceeding economists’ expectations.

It came after François Villeroy de Galhau, governor of the Banque de France and a European Central Bank (ECB) policymaker, said interest rates would need to rise further to reduce underlying price pressures. The ECB is expected to raise rates by 0.5 percentage points at both its February and March policy meetings.

Here in the UK, data from the Bank of England showed mortgage approvals fell to their lowest level in two years in November as increased borrowing costs put off buyers. Approvals fell to 46,100, down from 57,900 the previous month and the lowest level since June 2020, when the pandemic brought the housing market to a standstill. The interest rate paid on new mortgages rose by 26 basis points to 3.35% in November, the highest since 2013.

Separate figures from Halifax showed the average house price fell by 1.5% in December from the previous month. Halifax said it expects house prices to fall by around 8% during 2023, which would see the cost of the average property returning to April 2021 prices.

Top 8 Tips to Strengthen Your Financial Position in 2023